Hi there! Today I’m sharing a review for fantastic contemporary M/M shifter romances from Eli Easton. I won a free copy of HOW TO HOWL AT THE MOON, the first book in her Howl at the Moon series, and it was such a breath of fresh air that I just swooned. 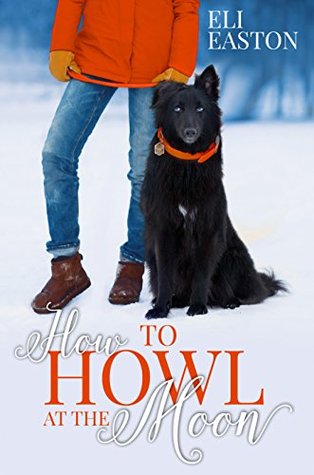 Sheriff Lance Beaufort is not going to let trouble into his town, no sir. Tucked away in the California mountains, Mad Creek has secrets to keep, like the fact that half the town consists of ‘quickened’—dogs who have gained the ability to become human. Descended on both sides from Border Collies, Lance is as alert a guardian as they come.

Tim Weston is looking for a safe haven. After learning that his boss patented all of Tim’s work on vegetable hybrids in his own name, Tim quit his old job. A client offers him use of her cabin in Mad Creek, and Tim sees a chance for a new start. But the shy gardener has a way of fumbling and sounding like a liar around strangers, particularly gorgeous alpha men like Sheriff Beaufort.

Lance’s hackles are definitely raised by the lanky young stranger. He’s concerned about marijuana growers moving into Mad Creek, and he’s not satisfied with the boy’s story. Lance decides a bit of undercover work is called for. When Tim hits a beautiful black collie with his car and adopts the dog, its love at first sight for both Tim and Lance’s inner dog. Pretending to be a pet is about to get Sheriff Beaufort in very hot water.

I really loved this one! Most shifter books I pick up are more “exotic” species like wolves, dragons, hedgehogs, frogs and the like. So, reading about Mad Creek’s hidden community of dog shifters was a total treat. In this world, dogs who share a special bond with their human partner can catch the Spark that initiates transformation, or “quickening.” Mad Creek is filled with newly quickened humans-who-used-to-be-dogs and they are a wild, pun completely intended, bunch.

Tim is a self-trained horticultural whiz. He worked for an organic plant company under the thumb of an autocratic jerk who abused Tim’s trust and left his name off all the patents of unique, beautiful and delicious flowers and vegetables Tim created. He’s starting over with a few rose seeds he’d harvested in his own time, and hoping that his boss doesn’t sue him for patent infringement.

Sheriff Lance Beaumont is a feisty collie shifter, third generation of quickened. He has a fierce loyalty to the residents of Mad Creek and protects their small enclave with his constant and unwavering attention. That’s why Lance is still single. He can’t fathom spreading his attention to a wife, or children, and keeping outsiders from learning of the magical aspects of Mad Creek’s population. Meeting Tim at the local diner sets off all Sheriff Beaumont’s warning bells, mostly because he reeks of marijuana and everyone in the backcountry of California’s mountains fears illegal pot growers are poised to invade. Lance is especially sensitive to this, as the squatting farmers would also bring attention, and could blow the cover of his fellow quickened.

Fearing the worst, Lance pulls a dirty trick: disguising himself in his dog form and allowing Tim to “adopt’ him after feigning an injury. This way, he can investigate Tim’s greenhouse seedlings undetected and arrest Tim before any further bad guys arrive. This is a hysterical situation, in reality. All the residents of Mad Creek know Lance very well, both as a man and a collie. The veterinarian gives “Chance,” as Tim dubs him, a humiliating pink paw wrap, and Lance’s interfering mother comes sniffing around Tim’s home, more than once.

When Lance recognizes that his inner dog is bonding with tender, timid, kind-hearted Tim, he’s in a real quandary. How could he arrest the man his dog yearns for? And, could Lance get Tim to be interested in him–as a man? Though Lance has never had a yen for men, his dog is so over the moon for Tim that he cannot hold himself back from feeling all that love, too.

I so enjoyed the many faux pas of both Lance and Tim as they navigate this heartwarming love story. They have so many fun moments, and some not-so-fun ones, like Tim learning Lance’s secret, and feeling a fool. I have to say, I loved Lance’s pushy mom. She was a treasure. The sexytimes were delish, with Lance having his first-ever experiences with a man…and digging it. Lance is such a straight-laced guy, who becomes almost voracious for Tim, and that was both captivating and charming. I adored this book so much I immediately bought the next book in the series. I’ll share a review for that one as soon as I can.

Interested? You can find HOW TO HOWL AT THE MOON on Goodreads, Amazon, Barnes & Noble and AllRomance.

Having been, at various times and under different names, a minister’s daughter, a computer programmer, the author of paranormal mysteries, a game designer, an organic farmer, an avid hiker, and a profound sleeper, Eli is happily embarking on yet another incarnation as a m/m romance author.