Hi there! Today I’m sharing a release week review and book giveaway for a M/M shifter romance series from V.L. Locey. AN ERIE COLLECTION contains four novellas featuring Templeton Reed, a skunk shifter who inexplicably falls for Mikel Lupei, alpha of the Lake Erie wolf pack. I’ve previously reviewed AN ERIE GARDEN PARTY, but was hungry for more of this fun and engaging shifter world. For those who’ve enjoyed any of the previously-released novellas, this collection includes a fourth novella that is new. 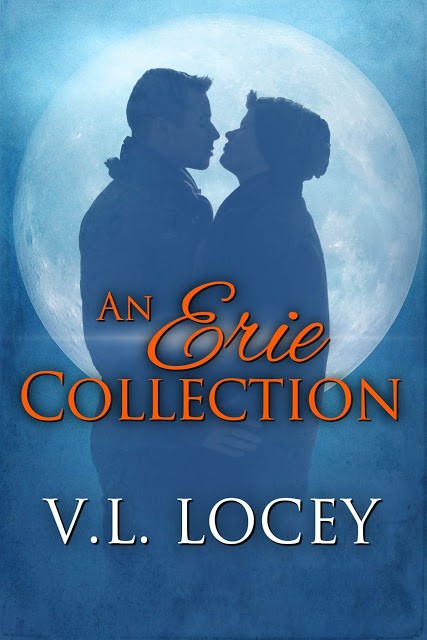 About the book:
You can now have all four of the MM Lake Erie pack novellas in this one reasonably priced collection! Included in the set are the previously released novellas An Erie Halloween, An Erie Operetta, and An Erie Garden Party. To round off this whimsical and romantic shifter set is a brand-new novella, An Erie Uprising!

It’s been one wonderfully romantic year since skunk shifter Templeton Reed met Mikel Lupei, the alpha wolf of the Lake Erie pack. During that year, the two men fell in love and worked side-by-side to solve some tricky murder mysteries. They also opened up Lupei Manor, Mikel’s familial home, to other LGBTQ mystical beings in the Erie area. Sadly, being gay in the supernatural world Templeton and Mikel live in can be a death sentence.

During the past year, the magical world has slowly been coming unraveled. Civil unrest now runs rampant through the community as the lesser breeds revolt against the hateful dictates of the Elder Counsel. The uprising will surely touch every person residing in the magical world beside Lady Erie. Will the flames of unrest and war consume everything and everyone Templeton and Mikel hold dear as well?

My Review:
Templeton Reed is a shy skunk shifter working diligently as a lineage specialist for the shifter world. Given the hierarchy of their world skunks are near the bottom–and lots of the “Lesser” shifters are suddenly disappearing–violently. So, he’s worried, but not truly anticipating the attack of a puma and bear shifter. Some quick thinking, skunk-muskiness, and a determined wolf, Mikel Lupei, is all that keeps Templeton on the “still with us” plane. Two things become clear: Templeton’s attack wasn’t random, and Mikel’s got a hankering for his pungent rescuee.

Thing is, same-sex relations are banned in their shifter community. Likewise, even if homosexuality wasn’t a fatal crime, it’s still not okay for a wolf shifter to have relationship with a lesser (skunk) shifter. Defying the laws and customs of their world Templeton and Mikel find love that surpasses their dreams. Unfortunately, it brings more doemsetic trouble than even Mikel could have predicted.

Their love, and the scope of their relationship, grows in the three following novellas. IN these Templeton has the opportunity to show exactly how fierce a lesser shifter can be, risking certain death to uncover the mysteries of murdered shifters, and rescue Mikel from enforcers of their own community. The writing is whimsical, and there’s plenty of sexytimes to balance the action and intrigue. The first time I read AN ERIE GARDEN PARTY I wanted to know more about Templeton, Mikel and their world. Now that I’ve read the whole series, I totally enjoyed the experience. Highly recommend to fans of M/M shifter romance, especially those who love odd shifters and unusual pairings. The series also features some non-shifter paranormal folk, so expect a vamp, or three, as well as some keen insight into societal inequalities and the fight for equal rights for all.

Interested? You can find AN ERIE COLLECTION on Goodreads and Amazon (US and UK) Barnes & Noble, iTunes, and Kobo.

Click on this Rafflecopter Giveaway link for your chance to win a backlist book from VL Locey.
Good luck and keep reading my friends!

About the Author:
V.L. Locey loves worn jeans, yoga, belly laughs, Dr. Who, Torchwood, walking, reading and writing lusty tales, Greek mythology, the New York Rangers, comic books, and coffee. (Not necessarily in that order.) She shares her life with her husband, her daughter, one dog, two cats, two Jersey steers and a flock of assorted domestic fowl.

When not writing lusty tales, she can be found enjoying her day with her menagerie in the rolling hills of Pennsylvania with a cup of fresh java in hand.