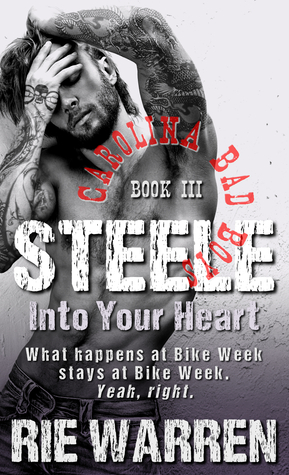 About the book:
Brodie Steele is a badass MC dude. Ashe Kingston is a sexy police officer with an attitude. Their bad blood runs deep. But after they hook up at a wild biker week, can they keep their pact? What happens at Bike Week stays at Bike Week. Yeah, right.

Riding out the rough years following a family tragedy, Brodie is still trying to put his life back together when he finds something he never expected with Ashe. She annoys the ever lovin’ hell out of him, and turns him on so much he can’t see straight. He keeps coming back for more.

Ashe isn’t just a hard-nosed police officer. And she wants no part of Brodie outside of their no-strings-attached fling. There’s no way he’s settling-down material but he’s hard to resist with his inked sleeves and rebellious ways, not to mention piercings in places that make Ashe melt. Brodie Steele is dangerous, delicious, and suddenly determined to have her.

If there’s anything more risky than laying his heart on the line for this sexy woman, it’s Ashe’s job. It puts her life in danger in a way he can’t possibly protect her from. Can their hot bond win out over the bad blood of years past? Or will Ashe be taken from Brodie before she lets him into her heart?

My Review:
As with the previous books in this series, it’s written entirely from the male lead’s POV–so we get the inside of Steele’s filthy mind, as well as his filthy mouth. Thing is, it’s awesome, because Brodie Steele isn’t just a big bad biker–he’s a good guy.

He works hard, and loves his siblings and misses his parents and wants a real life with a real woman. He’s played the field a good long time, and we can’t believe the connection he makes with Officer Ashe Kingston on his Bike Week vacay to Myrtle Beach. No, the tough-as-nails cop who, years ago, arrested his junkie sister (Cat, from LOVE IN THE FAST LANE) cannot be the sexy tiger lily tatted sex nymph with whom he spends five luxurious days and five incendiary nights.

Well, okay, it’s the same gal, but he doesn’t think about her the same after that. Some people have a Come-To-Jesus moment, Brodie has a Come-With-Ashe week, and it’s not okay that she cuts him out the second their tires hit the serene streets of Mt. Pleasant.

Brodie can’t handle the separation, but he does, out of respect–but soon the lines get blurred and he and Ashe reconnect, only to have him be on the outs again. People in his motorcycle club think he’s a traitor for dating a cop, but all he wants is a real try with Ashe, one she isn’t willing to give him…until her daughter walks in.

That’s right, Ashe is a single working mother, and she never brings men home. But Cara is a charmer, and she has NO problems with Brodie, or his tats or his motorcycle, because Cara sees how happy Ashe is when Brodie’s around. And, Brodie? Absolutely smitten with this 8 year old truth-bomb-dropping soccer phenom.

But, as Ashe and he get closer to the real deal, life gets in the way. Ashe is promoted to Detective, and her first case is investigating Brodie’s motorcycle club. Brodie and his brother Boomer–who run the club–are good guys and squeaky clean, but there are brothers in their midst who are not, and it looks like Ashe is a big target for them. Brodie’s already lost his parents, losing Ashe isn’t even an option.

As always, with these books I’m just along for the ride. Living and loving alongside a stand-up guy who will melt the heart of his chosen one. Brodie is as delicious as they come, from groomed goatee to body art to junk jewelry. He loves with his entire self, and will not turn his back, even to protect his own heart. Ashe is a strong, fierce woman who won’t take crap from anyone, except, perhaps, her daughter.

You want a sexy read with a seriously good guy, not a controlling lover? Steele is your man.

Interested? You can find STEELE: INTO YOUR HEART on Goodreads and Amazon. For release day it’s on sale for $.99. You won’t regret it…

Again this is the third book of delicious Carolina hotness, from Rie Wareen. You can find the buy links for STONE: AT YOUR SERVICE and LOVE: IN THE FAST LANE in my review pages.

6 thoughts on “He Will STEELE: INTO YOUR HEART–Release Day Review”