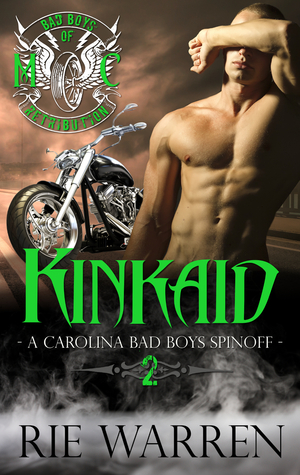 My Review:
Kinkaid Ryder is a young, fit, male stripper. He is loud and proud on the stage earning money to pay down his grandpa’s medical debts, but keeps that part of himself secret from his childhood best friends, Sadie. Oh, and also from the guys at Retribution, because they wouldn’t accept a stripper into their club, and he really wants to join.

See, Kinky Kaid, as he’s known on the stage, doesn’t have a lot of people in his life. His dad left before he was born, and his mom died when he was a toddler, leaving him to his Grandpa’s care–and now that Gramps is sick, Kinkaid is gonna make sure his life is comfortable. Then, Sadie spots Kinkaid while out at a bachelorette party. and Kinkaid is just as stunned by the dressed-up version of his overall’s wearing artistic tomboy BFF. The attraction is magnetic, but Sadie’s so furious she cuts Kinkaid off for a bit. He’s frustrated, and angry. And can’t believe that she’s harbored a secret crush on him for years. Finding him bare-ass naked, writhing for a lust-crazed crowd is too much for her to take.

While the make-up is tender, Kinkaid’s job is one mountain on the path they can’t seem to climb. I really enjoyed this quick read. Kinkaid is a 21 y/o, dumb, sexy dude who wants to eat his cake and have it, too. While he can’t bear to have men ogle a clothed Sadie, he sees nothing wrong with giving hundred-dollar lap dances. I had to shake my head at his naivete. Still, he’s earnest and compassionate and he learns his lessons right before the end comes. There’s a lot of heart here and the soulful discussions Kinkaid shares with his ailing gramps are really something special. I’ve read lots of stories with a young gal stripping to support her family or education, so it was fun to get the flipside. It’s a cool literary complement for fans who clamor to catch Magic Mike XXL this summer. Expect graphic sex, crude language, and a cocky stripper who learns to bare his heart and cover his body.

Interested? You can find KINKAID on Goodreads and it’s surrently $.99 on Amazon.