Hi there! Today I’m sharing a review for a paranormal-zombie-shifter-apocalypse-M/M romance! As you know I’ve loved me some Keira Andrews books, including her gay Amish romance trilogy including A FORBIDDEN RUMSPRINGA, A CLEAN BREAK, and A WAY HOME. When I heard about KICK AT THE DARKNESS, I was nervous. It seemed like there was A LOT going on! I bought it, and set it aside–until I could give myself a bit of time to enjoy it. I just finished it last week, and I’m so glad I didn’t let this one slip past me.

I like to feature paranormal romances in October, and this one is certainly a thriller… 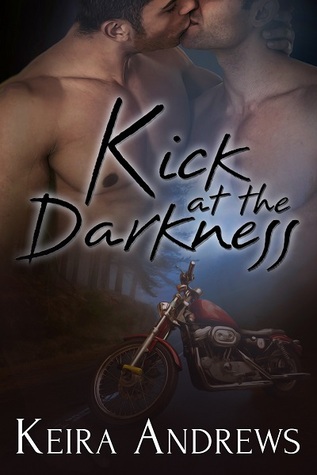 To live through the zombie apocalypse they have to survive each other first.

College freshman Parker Osborne is having the worst day ever. He humiliated himself trying to pick up a cute guy, he hasn’t made any friends at school, and his stupidly hot jerk of a TA gave him a crappy grade on his paper. He’s going to drop Adam Hawkins’ film class and start fresh tomorrow after he’s had a good sulk.

But Parker’s about to find out what a bad day really looks like—if he can survive the night.

A virus is unleashed, transforming infected people into zombie-like killers. After these quick and deadly creepers swarm campus, Parker only escapes thanks to Adam swooping him onto the back of his trusty motorcycle. Now they’re on the run—and stuck with each other.

When they’re not bickering, they’re fighting off the infected in a bloody battle for survival. Their only hope is to head east to Parker’s family, but orphaned Adam has a secret he’s not sure Parker will accept: he’s a werewolf. Can they trust each other enough to find some light in these dark days?

My Review:
This book was more than awesome.

I’ve had it on my TBR too long. I bought it months ago and never had the chance to read it, due to scheduled blog reads. And, I’ll admit it right now–I was afraid the hype was overblown. That I’d read it and be like: #Meh.

I was SO wrong! I want to kick the darkness out of myself for delaying.

Parker is a freshman at Stanford, and in danger of doing poorly in his film class–the one blow-off class he picked. And blew off. He’s furious with his TA, Adam, who won’t change his grade because Parker is a prick and he did a bad job. Before Parker can drop the class, however, the world descends into chaos as a virus spreads like wildfire across the country–creating zombie-like infected hordes that are out for blood. It is only Adam’s fast pace and even faster motorcycle “Mariah” that saves Parker from becoming zombie-lunch.

This is an adventure which becomes a romance. Parker has no idea that Adam might be interested in him, and frankly, both of them are too busy not getting killed to worry about sexytimes. But they happen, unexpectedly and deliciously! Parker is swooning, quite honestly, when he learns how Adam is such a good protector (insert paranormal element here). It’s not enough to diminish Parker’s ardor, because he fell for the man, first. #AsItShouldBe.

There are entanglements where there should be hospitality which creates a good deal of drama and a daring rescue. While I personally object to “mad scientist” tropes, being a scientist who occasionally gets mad, it worked in this book. I was so on board Mariah, feeling the wind whip through my hair, hoping against all reason that Parker and his family would be reunited.

The end is a lovely and unexpected surprise. #Adored. #ImmediateReRead

Oh, and yummy sexytimes and a solid romance which develops honestly.

Interested? You can find KICK AT THE DARKNESS on Goodreads, Amazon, Barnes & Noble, and AllRomance.

8 thoughts on “Had to KICK AT THE DARKNESS–A Review”