Hi there! Today I’m sharing my review for PD Singer’s new release, OTTER CHAOS. This is a super fun contemporary M/M shifter romance which features an otter shifter! In Colorado. Oh, the powder.

Except, there isn’t any powder, just conniving werewolves and one mixed up otter. I adored! Check out the excerpt and giveaway, too! 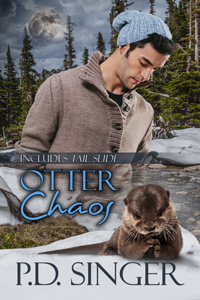 Lon Ewing snowboarded in and turned economist Corey Levigne’s life upside down, introducing him to a world he didn’t know existed. Corey’s still adjusting to a boyfriend who shifts into an otter and raids the koi pond—and now Lon says Corey’s department chair is a werewolf?

Wolves at the university, wolves in the bank—across Lon’s desk sits Professor Melvin Vadas and his hench-wolves, demanding a construction loan for the pack’s new lodge in the mountains. There’s just one little problem: the proposed building site is home to a breeding population of rare fish.

What do wolves care for stupid human rules, an otter who’d barely make a good snack, or one pesky human determined to protect the environment? Once they’re snout to snout with Corey and Lon, there’s more than silverscale dace on the Endangered Species List.

Includes Tail Slide, the short story that launched Otter Chaos.
Fresh powder snow and running water in the Colorado back country call Lon like the moon calls the wolves. Belly-sliding to a good time on the weekends makes up for a workweek at a desk, and meeting Corey adds a whole new level of fun to snowboarding.

It’s easy to slip away for time alone in the woods without raising suspicion, but how’s Lon to entertain himself when bad snow and a worse spill force them off the mountain too early?

Never give an otter a box of Cheerios.

How About a little taste?

Threading his way between the tables to reach the group, Corey intended to set the glass down on the small table in their center without interrupting the flow. Maybe he didn’t really need to steady himself on Lon’s shoulder, but it was a good excuse to touch his boyfriend, get a little squeeze and a promise for later in at the same time. “Bet you need to wet your whistle.”

Lon jerked up hard enough to jostle Corey’s arm. Brown liquid slopped over the rim of the glass. At least it missed Lon’s instrument, but what—?

“No. Sorry. But no.” Lon twisted under the strap of his guitar. “We need to leave. Now.”

“Now. Please.” Lon was up and sidling toward his guitar case.

Corey followed. What else could he do? The man who’d been gleefully leading fiddles and mandolins had cased his instrument and bolted out the side door. Lon barely waited on the porch of the old house turned brewpub, dashing to the passenger side of the RAV4 before Corey was quite outside in the chill spring night.

“Okay.” Corey tucked his long legs under the steering wheel and peeled out of the parking lot. “Want to explain the sudden need to be elsewhere?”

Lon’s knuckles practically glowed with their whiteness—if the armrest of the passenger seat breathed, Lon would have choked the life out of it three blocks back. “I smelled wolf.”

That again. “I did see Melvin come into the pub.” Corey aimed the truck toward south Boulder, because Lon had that trembly look where his dark brown hair and beard seemed to puff out bigger. Absolutely no reason to stress him, and every reason to take him home and pet him into exhausted, sweaty peace.

“Can you get a job at Harvard or Stanford or somewhere far, far away from CU?” Lon whimpered. “Or decide you don’t like me anymore?”

“No and no.” Corey gave his lover a stern look on the turn into the driveway. “I’m headed for tenure here and I love you. I don’t want to change either one of those things.” He pulled Lon across the console to plant a kiss in short, sleek, hair. “Let’s go look at the koi one last time, and then last one into bed is a rotten egg.”

“Rotten egg! Ick!” But Lon was diverted enough to scamper to the back yard, not too fast to be caught.

My Review:
This is a sweet and different M/M shifter romance.

Lon and Corey are newly coupled–just moved in together–and are working out all the kinks. As is normal for a new couple they need to figure out who’s gonna do the household chores, and how they’re going to manage car use and date night activities–but these “usual” issues are complicated by one simple fact: Lon is an otter shifter.

Every week he needs to spend some time in his otter form, 1-5 hours generally scratches that itch, while longer than 12 hours of otter fun has Lon lost in a haze between both worlds where the water is his best friend and all he wants to do is play. See, when he’s an otter, Lon’s really an otter–lost in his otterness. He hunts and behaves like and otter–even if it means eating the decorative koi he and Corey put into the pond out back, or shredding all the toilet paper rolls in the house.

In his human form, Lon’s a loan officer for a Boulder bank, and he’s not happy when a trio of werewolves appear at his desk for a loan to fund building the Full Moon Conservancy on forestry land. Lon knows that the property is part of the protected habitat of the silverscale dace, an endangered indigenous fish, and that’s part of why he declines to approve the loan–approval can only come after the environmental impact studies.

Some problems? Werewolves don’t like to be told no. Also, the alpha of the pack, Melvin, is Corey’s department chair at U-Colorado. He recognizes Lon’s scent on Corey, and that’s a whole new dimension of TMI. Lon fears that the werewolves will eradicate the dace from their property, or kill Corey, or himself, and takes some bold strokes to prevent that–little does he know the werewolves have a dastardly plan to get rid of the dace “naturally” with the help of a few hungry otters…

What I really enjoyed about this story is the in-depth characterization of Lon, and Corey. They both have to deal with the otterness of Lon, and Corey’s doing his darnedest without knowing truly how to help Lon. Because Lon’s pretty protective about the ins and outs of shifting. In some ways it seems that Lon doesn’t actually KNOW the answers to the questions Corey poses, because he’s a whole different being as an otter and this is not translatable. Like, there aren’t words much when he’s an otter. And, if he’s an otter for several hours Lon loses his ability to speak when he pulls his fur back.

As Lon deals with the werewolves, Corey tries his best, though it’s not good enough. Lingering effects of shifting threaten to pull Lon into otterness forever, and it’s all Corey can do to keep him on this side of the pelt. It was a great psychological story, and I loved the development of the relationship between them. Poor Lon, who loves the tasty koi! Poor Corey, who doesn’t know how to deal with a truly wild mate!

They are a great pair. The pace of the story, and the switching POV both hit the mark for me. I liked the sexytimes, and the emotional context for this couple felt right. They are still getting acquainted–they’ve only dated a couple of months, and the growing pains of coupledom had authenticity.

Seriously, this book is filled with cute. I loved the short story, TAIL SLIDE which is part of the book, and gives up the skinny on how Lon and Corey met and fall, quite literally, for one another… D-lish!

Click the Rafflecopter link below for your chance to win 1 signed copy of Otter Chaos, 1 ebook (mobi, epub or pdf), or an otter ornament! ( 3 different winners, yay!)
a Rafflecopter giveaway
Good Luck and keep reading my friends!

About the author:
P.D. Singer lives in Colorado with her slightly bemused husband, two rowdy teenage boys, and thirty pounds of cats. She’s a big believer in research, first-hand if possible, so the reader can be quite certain PD has skied down a mountain face-first, been stepped on by rodeo horses, acquired a potato burn or two, and will never, ever, write a novel that includes sky-diving.

When not writing, playing her fiddle, or skiing, she can be found with a book in hand.