Hi there! Today I’m sharing a review for a new contemporary M/M romance from Keira Andrews. You know I’ve enjoyed her books about gay Amish love (A FORBIDDEN RUMSPINGA, A CLEAN BREAK, and A WAY HOME) and epidemic disaster survival (KICK AT THE DARKNESS) so I had to get her latest release. BEYOND THE SEA is a fascinating story of survival and love that develops when one least expects it. 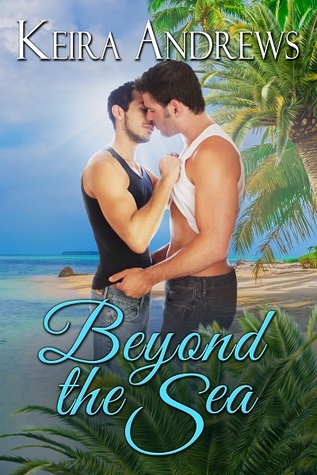 About the book:
Even if it means quitting their boy band mid-tour, Troy Tanner isn’t going to watch his little brother snort his future away after addiction destroyed their father. On a private jet taking him home from Australia, he and pilot Brian Sinclair soar above the vast South Pacific. Brian lost his passion for flying—and joy in life—after a traumatic crash, but now he and Troy must fight to survive when a cyclone strikes without warning.

Marooned a thousand miles from civilization, the turquoise water and white sand beach look like paradise. But although they can fish and make fire, the smallest infection or bacteria could be deadly. When the days turn into weeks with no sign of rescue, Troy and Brian grow closer, and friendship deepens into desire.

As they learn sexuality is about more than straight or gay and discover their true selves, the world they’ve built together is thrown into chaos. If Troy and Brian make it off the island, can their love endure?

My Review:
Troy is a member of a boy band fleeing his drug abusing bandmate/brother Tyson after learning his bro’s on heroin. Brian is the co-pilot on the long range charter flight to bring Troy from Australia to LA.

The plane crashes, killing the pilot, leaving Brian and Troy marooned on a desert isle in the uninhabited atolls of the south Pacific. They are lucky to have survived, and to find nourishment on the island. They set to work surviving, in the hope of being found. They bond. Slowly, Troy–the sunny optimist–begins to realize what Brian has known all along…a rescue is unlikely, and less likely with every passing day. It’s a hard truth to own, as Troy feels terribly guilty for chartering the plane. He agonizes over Tyson’s well-being, and he’s lonely. He is used to never truly being alone, and this isolation with Brian is both a comfort and a curse. He’s held tight to some very ugly secrets and this connection to Brian–as the closest confidante he’s ever had–is confusing for him. He admires Brian, and this admiration leads to feelings of intimacy that he questions, a bit.

Brian, for his part, is overwhelmed by loss. This was not his first plane crash and he never anticipated surviving another. He’s stunned at how well Troy takes to marooned life. He’d expected a diva, and he’s pleasantly surprised at Troy’s unfailing strength and constantly upbeat nature. As an introvert, Brian needs some alone time, and soon recognizes that he looks forward to seeing Troy more and more. His usual erotic fantasies aren’t cutting it, not when Troy’s image intervenes. This is troubling to Brian, but not too much. Troy is the closest friend he’s had in…ever? He’s sexually frustrated, but that’s a small issue. Brian had closed himself off to his friendships a few years before and his forced occupation with Troy opens wounds he’d thought healed. Together, Troy and Brian find companionship and connection they hadn’t experienced, and it’s great for them. It leads to some sexual experimentation, and that helps to bond them closer.

I totally enjoyed this book. I was so captivated by the survival aspects and how these guys made it work. There are really harrowing bits, from the crash to the establishment of shelter, and the creepy-crawlies in the jungle. I liked how they had to work hard to survive, to some degree. Likewise, their attraction is something the characters work for. They get to know each other. They learn to like each other. They are deeply connected friends before they are anything more. Each man has a bit of a crisis with regard to their developing attraction. At first it’s all: We’re the last two people on the planet, practically, so why should we get bogged in societal norms/issues. They each adjust their hetero minds into a more “bi” space. As they experience more physical intimacy their feelings creep into love–and that’s when it gets a whole lot more complicated.

Whatever people may feel about Gay For You as a trope, I think that there are a lot of people who believe themselves to be bisexual and resist same-sex attraction for myriad reasons. I enjoy stories that have characters make big choices and have big adventures. I enjoy stories that have some logical progression, and I’m rather certain that survivors on a desert isle would likely find physical and emotional solace with each other. Of course, I grew up watching THE BLUE LAGOON on cable TV and, well, two healthy, isolated, straight dudes tentatively getting it on (okay it was some yummy sexytimes!) is nothing compared to two Victorian cousins discovering puberty, love and sexuality together… at least not in my 9 y/o brain.

Interested? You can find BEYOND THE SEA on Goodreads, Amazon, Barnes & Noble, iTunes, Kobo, Smashwords, and AllRomance.