Hi there! Today I’m sharing my review for QUINN INVISIBLE, a YA mystery/romance that really packs a gut punch. I really enjoyed IN YOUR DREAMS and AS YOU WAKE, books in Amy Martin’s In Your Dreams series, so I was eager to read QUINN, and I was not disappointed. 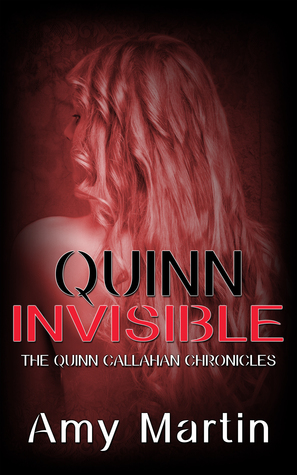 About the book:
When her cop father is killed in the line of duty, Quinn Callahan returns from New York to her hometown of Shady Springs, Missouri, to live with her aunt. Unfortunately, Shady Springs holds nothing but pain for Quinn, whose mother allegedly murdered Quinn’s popular best friend Emma before killing herself, leaving Quinn a bullied outcast at her upscale prep school.

After almost four years away, Quinn finds not much has changed at Harrandale Preparatory Academy, although her bullies have grown older, taller, and crueler. And Emma’s twin brother Evan is still indifferent to her, which is more painful than any punishment her classmates can inflict.

Determined to clear her mother’s name, Quinn begins re-investigating Emma’s death with the help of some new friends and–eventually–Evan. But will Quinn and Evan be able to live with what they learn about their families in the process?

My Review:
Quinn is an orphan–but it’s worse than that. Four years ago her mother was implicated in a murder-suicide that also ended the life of Quinn’s BFF, Emma. Quinn and Emma’s twin, Evan, had been developing a romance–which is completely derailed by Emma’s death–and Evan’s mother committed suicide a month later, leaving both Quinn and Evan mother-less.

Quinn’s father, a police detective, was fired for copying the case files surrounding his wife’s death, hoping to solve the mystery in a way that exonerated the woman he loved, but he’s caught and fired–so he moves to NYC with Quinn, and the book opens with Quinn’s father being killed in action in NYC.

Quinn is forced to return to the affluent St. Louis suburb she fled four years prior as a pariah. Her paternal aunt has custody and is determined to follow Quinn’s father’s wishes by sending Quinn to the prep school she had attended with Emma and Evan–only now Evan is aloof (understandably) and all the in-kids are busy making life super difficult for Quinn.

Quinn manages to get befriended by Seti and Hal, an odd couple who keep their relationship on the down-low from Seti’s parents who are happily planning her medical career and arranged marriage. They reach out and help in ways that are realistic and awesome. Their biggest assistance is with sorting through the copied case files that Quinn discovered amongst her father’s effects. It becomes Quinn’s mission to clear her mother’s name–if not for her own sanity, to restore the balance between herself and Evan.

There is a romance here. Evan is conflicted about his affection for the girl he’d begun to love before his world axis was tilted, twice. It is cautious, and age-appropriate, with little more than kissing on the page. Still, that is a real problem for Quinn, whose investigation seems to implicate people VERY close to Evan perpetrating a double murder.

So, clear her mom? Or break Evan’s heart yet again–by revealing what she learns. Quinn makes a good choice, even though it messes up her life even more. Considering all that she learns in this investigation, it turns out Quinn’s life was pretty messed up before, though she had no idea about that.

I really enjoyed this read. The pacing is great, the relationships are real, and Quinn is a main character who is steady and true to her purpose. The end was not far from what I expected, but the twist makes the sequel a necessity. Not a cliffhanger, but there is certainly enough work for Quinn to undertake in her mission to fill another book.

Interested? You can find QUINN INVISIBLE on Goodreads, Amazon, Smashwords, Barnes and Noble, iBooks, and Kobo. 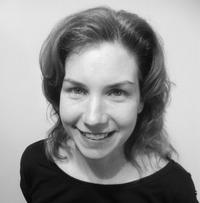 About the Author:
Amy Martin wrote and illustrated her first book at the age of ten and gave it to her fourth grade teacher, who hopefully lost it in her house somewhere and didn’t share it with anyone else.

The first novel she published as a grown-up, In Your Dreams, was a 2012 Amazon Breakthrough Novel Award Semi-finalist in Young Adult Fiction. In Your Dreams was the first of a four book series (In Your Dreams, As You Wake, Before You Sleep, and Beyond Your Dreams). Her latest novel, Quinn Invisible, will debut in August 2015.

Amy currently lives in Lexington, KY with her husband and a ferocious attack tabby named Cleo. When not writing or reading, she can usually be found watching sports, drinking coffee, or indulging her crippling Twitter habit (and, sometimes, doing all three at once).

Synopsis (unspoiled [mostly]): In this first-person single point-of-view contemporary YA romance we meet Zara “Zip” McKee–a 16 y/o point-guard on her school’s varsity basketball team. Zip isn’t much into boys–because, in her small town, she’s known them all since preschool and they’ve always been ‘friends’. At the opening, two new kids have arrived; brother and sister Kieran and Kayla Lanier. Kieran isn’t just new, he’s someone very different from anyone Zip has known–which she learn in first period English when she bores him to death…or he passes out. [Spoiler: he lived but he had to carried to the nurse.]

This auspicious beginning sets into motion big reveals by Kieran and the Lanier family–all intensely private people. And the bombshells–even for Kieran, who has suffered a variant of narcolepsy since childhood–are well-developed and plot-driven. As the root cause of Kieran’s condition becomes known it is Zip to whom he clings, and she’s not too sad over it. Especially when it mean s a boyfriend and date for the prom. <br /><br />But the darkness in Kieran’s past reaches out from unexpected places, coming through both his and Zip’s dreams and straining their budding relationship. They don’t know who to trust, and won’t risk losing each other, resulting in an exciting climax. Zip fights to help Kieran, but neither of them have the ability to solve this problem alone. Good thing they don’t have to.

Critique: This is a well-paced novel with some suspense and elegantly-placed red herrings. The romance reads true and is compelling, and the science behind Kieran’s malady is well-conceived. Zip and Kieran are a fun couple, and I can’t recall the number of times I laughed when poor Kieran passed out at just the wrong moment–but there were many.

I would recommend IN YOUR DREAMS (Amy Martin) to any person who enjoys YA romance…and anyone who enjoys a good YA story.

Looking forward to the sequel.

Disclosure: I received a free copy of this book in exchange for an honest review.

In this sequel to IN YOUR DREAMS we meet up with Zip McKee and Kieran Lanier right where they left off…grounded. And, that’s okay. In fact, it’s where I expected to find them. Pretty much that’s the end of ‘expectations being met’, however, because the story far exceeded my already high expectations.

Sometimes I feel as if I know where a story will go, the subtle (or not-so-subtle) foreshadowing leading me exactly where I think the story must end. And, particularly in romance, that’s acceptable. Expected, even. But, in reading AS YOU WAKE, I was led a merry chase by That Amy Martin! Kidnapped, as it were, and held hostage to a plot that continued to careen forward down unexpected paths.

Now, while the story moves forward, the main characters move in opposite directions–Zip to her Dad’s and Kieran on a runaway adventure. Just when I thought we’d get a break from the tension good old Kayla tries to make it right, guilty she hadn’t been more watchful at Prom. Of course, her idea reunites Kieran and Zip, but now the parental units are involved, and this is both good and bad. Good because the air clears between the two families, bad because it brings new problems to mix: stalker anyone? As the stalker issue gets resolved, we learn more about Kieran’s medical history, and begin to hope that the end of his dream-vision doesn’t portend the end of Kieran…

So….I’m a fan-girl. I eagerly await (notice I didn’t say PATIENTLY!) the final conclusion of this trilogy. Thanks Ms. Amy Martin for upsetting my sleep patterns.

Lastly, can I say I love Zip just as much as Kieran? Is that allowed? IDK, but it’s true. She is smart, thoughtful, and concerned about her future–qualities I would hope all teen girls would aspire to be. And, Kieran, he’s the right mix of awkward teen male hormone angst. He’s kind, and funny, and not pushy about the sex…though he’s quietly desperate to have it, at least once. So as a couple they match desire with respect, and what better example could we hope for in YA fiction?

I would recommend this to all teen and YA readers.