Hi there! Today I’m sharing a review for a F/F romance from Kris Ripper. It felt good to finally get back to this series, and what an awesome resolution. AS LA VISTA TURNS is the final book in the Queers of La Vista series, and brings closure to the loose-knit community who’d been terrorized by a serial killer in the first four books, GAYS OF OUR LIVES, THE BUTCH AND THE BEAUTIFUL, THE QUEER AND THE RESTLESS and ONE LIFE TO LOSE. It features a spunky lesbian lead who’s desperate to get pregnant, and help her friends heal and grieve those who had been killed. 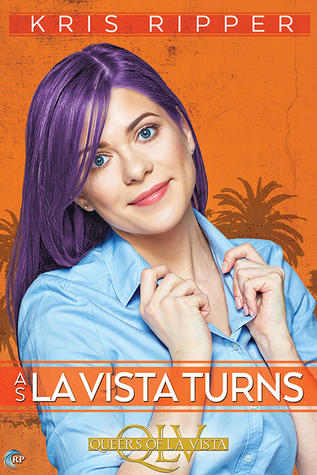 About the book:
Zane Jaffe has almost lost track of what conception cycle she’s in. (That’s a lie: this is cycle thirteen.) She’s fake-dating her pal Mildred to get her best friend off her back, but judging by how hot it was when they accidentally kissed, her feelings might be somewhat less platonic than she’d thought.

And she’s decided that healing the fractured local queer community can only be accomplished through a party. Or maybe it’s actually a wake. Whatever it is, it’ll take place at Club Fred’s, and there will be alcohol.

Trying to conceive is an unholy rollercoaster of emotions, and Mildred won’t let them kiss again until Zane figures out how she feels. Between the wake (exhausting as hell, and that’s just the fun stuff), the constant up-down cycle of trying to get pregnant, and saving the world in the meantime, Zane has no idea. Fall in love with Mildred isn’t on her list, but maybe it’s time to let go of that rigid future she’s been working toward, and instead embrace the accidents that can lead to something better.

My Review:
Zane Jaffe is a realtor who’s got a list for her life. Right now, the top priority is to get pregnant, though she’s a single lesbian woman. She’s been “fake dating” her friend “Dred” (short for Mildred) a cantankerous black pan-sexual woman who is raising an infant son with the help of her cousin Obie and his boyfriend Everett–who live in a big farmhouse on the edge of La Vista. (Obie and Everett are the couple from Gays of our Lives). Thing is, Zane’s sorta/kinda wanting more than a fake relationship with Dred. Maybe. It’s not on her list though…

After twelve failed cycles of inseminations, Zane’s really down on the prospect of pregnancy. She wants it so badly she’s willing to try some unconventional work–like accepting the donation of a dear friend’s…specimen. And, while all this is coming, literally, to a head, Zane’s determined to create a venue for all her friends to gather and mourn the loss of so many in their community. She’s working hand-in-hand with Keith, Josh and Cam, our menage from ONE LIFE TO LOSE, to be sure this “wake” is tasteful and positive. Add to all this the drama building between Zane and Dred, and well, it’s definitely a soap opera.

I wasn’t sure what to expect from this story. I knew there would a romance, but I didn’t expect to be so viscerally engaged in the pregnancy battle. It was such a whirlwind being inside Zane’s head, and connecting with her deep sense of loss when she hadn’t conceived. Hand to God, I think I got sympathetic menstrual cramps as a result. I did get frustrated with Zane’s inability to think about life beyond her lists. It was clear that Dred was reaching out, and Zane’s so keyed into her own headspace that she messed that right up. But, she did make it right, let her iron focus slip, and saw the good of it. Saw the beauty of living unscripted, and finding unexpected love.

This book was a fantastic resolution to the stories in the series. We see all the players as they assist Zane’s efforts with the “wake” and her pregnancy woes. They aren’t features, but their vignettes cap off the stories we’ve experienced with them, and the sense of wholeness is further developed when the wake happens. All these people were touched by tragedy and love, and their lives are all the richer than when we began. I’ve really enjoyed the spectrum of persons in the books, and recommend them to any reader who likes sexually diverse fiction. I hadn’t realized I’d needed catharsis from the first four books, but I’m all the better for it, too. Highly recommend.

Interested? You can find AS LA VISTA TURNS on Goodreads, Riptide Publishing, Amazon, Barnes and Noble, iTunes and Kobo. I received a review copy via NetGalley.