Hi there! Today I’m sharing a review for a M/M medical romance from newcomer M.K. York. NECESSARY MEDICINE recounts nearly a decade of desire of one training physician for the sexy silver fox transplant surgeon he falls hard for. 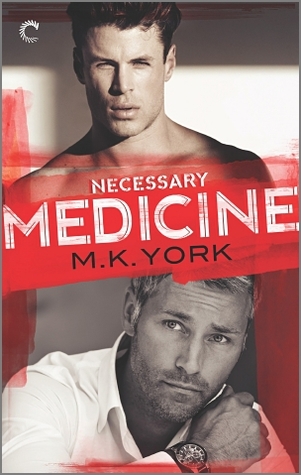 In the high-intensity world of hospital residency programs, there’s no room for romance. So it’s a good thing for first-year surgical resident Neil Carmona that his crush on the gorgeous cardiologist Eli Newcombe is sheer fantasy. Not only is the sexy doctor Neil’s superior, he’s also recently divorced.

As Neil’s skill as a surgeon grows, so does his friendship with Eli, and his silent, hopeless longing for more. It isn’t until Neil’s final year that Eli at last admits his own deepest desires. But Neil’s joy is short-lived: Eli has no intention of pursuing a relationship. Their positions in the hospital would make it unethical, even if he was emotionally ready for someone new.

Wounded and furious, Neil is determined to forget about Eli once and for all. But when a near-tragedy strikes, a new question arises: Is a life without love—without Neil—a greater risk than laying his heart on the line?

My Review:
Neal Carmona is a med student when his path first crosses with Dr. Eli Newcombe, renown heart transplant surgeon. Neal immediately recognizes that Eli is exactly his type: older, prematurely grey and way-smart. Not like anything would ever come of his attraction; Dr. Newcombe is giving a guest lecture at his university.

Fast forward a couple of years. Neal’s graduated and beginning a residency in the San Fran area. He’s never hidden his sexuality and he’s not going to start now. He wants to find a partner, but his training gets in the way. And that applies when Dr. Eli Newcombe joins the surgical staff. Neal fantasizes that he and Eli share a connection, especially when they begin working together on a diversity initiative to increase hiring of minority physicians at the hospital. Eli is far senior in the pecking order, and Neal knows making a mistake like admitting his attraction could land him in a world of trouble. Neal’s accepted in his field, mostly, but he knows this wouldn’t extend far if a division chief, like Eli, decided he was inappropriate.

I’m going to be honest, this book is a VERY SLOW burn. Eli does have an attraction to Neal, and a burning passion he won’t unleash. He’s very much cognizant of his administrative power over Neal, and he won’t risk impropriety tarnishing Neal’s reputation. They build a friendship that grows into a physical relationship. That then gets scuttled, and reconnected as Neal and Eli work out their dynamic. Eli isn’t gay, per se, and his coming out is complicated.

Having a deep insight into medical training, and having married a med student, I can attest that the trouble and issues the author presents are accurate. Unfortunately, like all training physicians, Neal’s struggle through residency isn’t that interesting. It’s a lot of sleep deprivation and working weird hours and lack of connection and heart, head, and back aches. That’s all very true. I struggled to stay invested with the story at points, however, on account of the pacing. Because that low-level drama is a bit sleepy.

The relationship development between Neal and Eli happens in fits and starts–and I got that. I felt Neal’s frustration. I did like how the supporting cast, notably Neal’s mentor, got them to see beyond the hurdles. The end is a sweet HEA, with Neal and Eli finding happiness together in a way that makes sense and stays true to the context of physicians who fall for one another. I think if you really love medical settings and just a hint of passion, this might be your book.

Interested? You can find can find NECESSARY MEDICINE on Goodreads, Carina Press, Amazon, Barnes & Noble, iTunes and Kobo. I read a review copy provided by NetGalley.

About the Author:
Michelle K. York is a medical student on the West Coast with a master’s degree in psychology. Necessary Medicine is her debut novel. Previous work includes fanfiction, as well as academic publications on the social perception of sexual orientation and the intersections of sexual orientation and gender identity with patient experience in the medical profession.