Hi there! Today I’m sharing a review for a M/M/M menage thriller romance from Kris Ripper. ONE LIFE TO LOSE is the fourth book in the author’s Queers of La Vista series, and brings the murder mystery introduced in GAYS OF OUR LIVES, THE BUTCH AND THE BEAUTIFUL and really discussed in THE QUEER AND THE RESTLESS to it’s ultimate conclusion. The featured characters are a shy, antisocial movie house owner and the committed younger couple who want him as a partner. 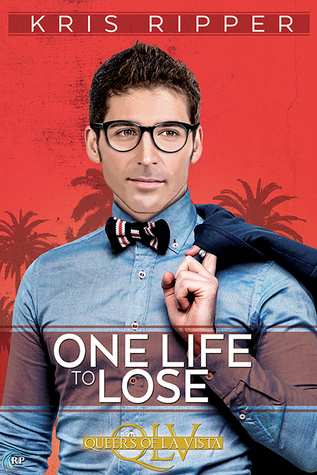 About the book:
Cameron Rheingold is the kind of guy who takes a book to a bar. He’s a loner by nature, but he has to engage with the community to keep his movie theater business afloat. When two young men stay after a Cary Grant film showing to chat, Cameron thinks he might have made some new friends—but their interest is more than friendly.

Josh is charismatic, and every smile is a little bit seductive. Keith is sweet and kind, with a core of steel Cameron can sense even when Keith’s on his knees. Cameron is willing to be the couple’s kinky third, but that’s it. He refuses to risk complicating things with his growing devotion, even if being with Josh and Keith feels more right than anything else ever has.

When the three of them are attacked by the killer roaming La Vista, Cameron must decide what’s more important: pretending the assault never happened and he’s the same loner he used to be, or coming clean to Josh and Keith about how much he loves them, even if they can never return his feelings.

My Review:
This is the fourth book in a series and best enjoyed when read in order due to continuing characters and a murder-mystery plotline.

Cameron Rheingold is a single gay man operating his family legacy, the Rhein Theater, one of those lovely throw-back moviehouses of yore. He grew up in the theater, helping at the ticket booth, and concessions, and being a part of the mix. His parents and grandparents are long gone, and he’s not about to let their theater fade away; it’s his touchstone. As a way to build interest, he decides to offer a series of Cary Grant showings on Saturday evenings–which feature the movie, a brief lecture and refreshments.

This is where he meets Josh and Keith. These young men are opening an LGBT drop-in center, to help the queer youth of La Vista find shelter from life’s problems. They have starry eyes and big hearted dreams, and well, they want Cameron to become involved. It’s not what Cam thinks, however. They are attracted to him, and in their D/s life together, they want a third–to help discipline Josh the way he desires.

It throws staid Cam into a bit of shock. He doesn’t consider himself to be a sexy man, and his nature is to walk away rather than charge forward, but there’s something so magnetic about Josh and Keith–and they are so loving to both each other and himself, that Cam finds their offer to be irresistible. Unfortunately, this draws the attention of the La Vista Killer–for reasons I don’t want to spoil. This serial killer has been murdering outre members for the queer community for the past eight months, and there are no leads. One of Cam’s few friends has recently been murdered, and it’s not long before Cam finds himself in the killer’s path.

Thing is, this experience–surviving the attack–should bond Cam, Josh and Keith together. And, it doesn’t. Not at first. The investigation is rough, and it seems both Cam or Josh might be under suspicion due to Keith’s BDSM “injuries,” and Cam can’t find any peace at night away from his lovers. He feels especially guilty that they got drawn into the attack, and won’t go to Josh and Keith’s home for fear of leading another predator in their path. His isolation is complete, and heartbreaking. But, love does find a way. Cam figured he was just the “side bit” to their love–until Josh and Keith make it very clear that he’s a part of them, one they are unwilling to live without.

I really dug the full-circle nature of this one, how the killer is brought out, how he stalks his victims, how Cam suffers PTSD in the wake of the attack. It’s very thorough as a thriller. Cam and his boys, Josh and Keith, are a loving trio, yet I got how Cam was so afraid of loving and losing that he always kept his emotional distance. I can imagine being the third to enter a menage would incur that level of self-scrutiny. The sexytimes aren’t terribly steamy, and the BDSM is brief, more discussion than page-time activity, but there’s a sweetness to this trio that’s really engaging. I always love when a loner finds love; that’s one of my big thrills. The way the Cary Grant movies were part of the drama was also cool, and having a movie house in my town, I loved that retro-made-hip aspect, too.

As a series, we’ve been through a lot of variations of the queer community, and I’ve found it sensitive and interesting. The killer isn’t someone I’d have expected, and his viewpoint is one I’ve not encountered much, but I do get glimpses of it now and again in the media. It startled me, but that’s okay; I like being surprised. Good thing Cam, Josh and Keith made it through, because I was fearing a complete melt-down tragedy for a few moments there…

That said, this ends with a satisfying happy ending, and I look forward to the next book.

Interested? You can find ONE LIFE TO LOSE on Goodreads, Riptide Publishing, Amazon, Barnes & Noble, iTunes and Kobo. I received a review copy via NetGalley.

3 thoughts on “Recognizing Truth ONE LIFE TO LOSE–A Review”