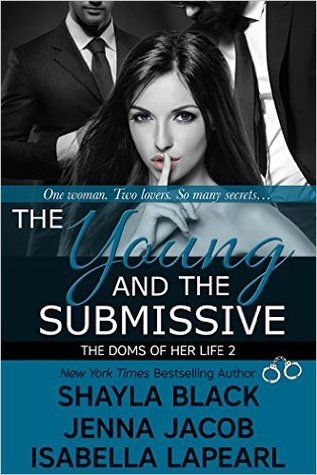 About the book:
Raine Kendall has everything a woman could want…almost. Sexy, tender Dom Liam O’Neill is her knight in shining armor, but Raine is constantly pinching herself. Is he too good to be true or is this growing connection one that could last a lifetime? She’s constantly torn by her abiding feelings for her commanding boss, Macen “Hammer” Hammerman, especially in the wake the mind-blowing night he cast aside the barriers between them and ravaged every inch of her body.

Hammer, Liam’s former best friend, can’t stop coveting Raine. But Liam is determined to hold and guide the woman he loves and see if she can be the submissive of his dreams. However, he’s finding that her trust is hard won and he needs a bloody crowbar to pry open her scarred soul. So he risks everything to win her once and for all. But once he’s put his daring plan in motion, will it cost Liam his heart if he loses Raine to Hammer for good?

Raine has spent six years in love with her dark knight, Macen “Master Hammer” Hammerman, ever since he took her in off the streets when she escaped her abusive father’s attempted rape. Hammer may run a BDSM dungeon, but he’d never force a partner–and he’s never wanted to abuse petite Raine. He’s loved her, but fears his own dark desire might be too much for her. Plus, she’s now connecting with his best friend and fellow Dom, Liam’O’Neill. Years ago Liam and Macen shared Macen’s wife, Juliet. It seemed a perfect arrangement, but wasn’t, and the men are gun-shy about sharing another sub.

Even if that’s what Raine needs.

This book is all about working in the kinks, and part of that is Liam and Hammer learning how to share. Their bickering is freaking Raine out, even before they decide to try a menage. Liam has collared Raine, but she can’t give her whole heart and submission to him, on account of having such a longing and respect for Macen. For my part, I was ready to kick Macen out of bed, empty chip bag or not. He’s a mental whirlwind, and devious. In the previous book he did the unthinkable, tried to claim Raine after she accepted Liam as her Master–and his treachery isn’t small, because he didn’t protect Raine when she was truly vulnerable.

Liam’s tender and loving, but he struggles with Raine’s silence. She may not lie, but she sure doesn’t tell the whole truth. His biggest gambit seems to all but fail, until some friends intervene. I really liked Beck, the dungeon’s resident sadist, and how he was the right kind of tough to get Raine back on track. These guys are a little bit silly, to me. They practice D/s but they aren’t hard 24/7 which was a relief. Liam and Hammer get on board with Beck’s plan to work together, and that’s the best part of the book–also the end, mostly. Expect a sated sub, two frazzled Doms and a smart aleck surgeon to save the day. While it’s the end of the book, it’s just the beginning of their new menage. I found this one to be both more sexy and more romantic than the first book.

Interested? You can find THE YOUNG AND THE SUBMISSIVE on Goodreads, Amazon and Barnes & Noble.

Raised an only child, Shayla occupied herself with lots of daydreaming, much to the chagrin of her teachers. In college, she found her love for reading and realized that she could have a career publishing the stories spinning in her imagination. Though she graduated with a degree in Marketing/Advertising and embarked on a stint in corporate America to pay the bills, her heart has always been with her characters. She’s thrilled that she’s been living her dream as a full-time author for the past seven years.

Shayla currently lives in North Texas with her wonderfully supportive husband, her teenage daughter, and a very spoiled cat. In her “free” time, she enjoys reality TV, reading, and listening to an eclectic blend of music.

Bestselling author Jenna Jacob paints a canvas of passion, romance, and humor as her Alpha men and the feisty women who love them unravel their souls and heal their scars to find their happily-ever-after kind of love. Heart-tugging, captivating, and steamy, Jenna’s books will surely leave you breathless and craving more.

Meet the wild and wicked family in her sultry series: The Doms of Genesis. Or become spellbound by the searing love connection between Raine, Hammer, and Liam in her continuing saga: The Doms of Her Life (co-written with the amazing Shayla Black and Isabella La Pearl). Journey with couples struggling to resolve their pasts to discover unbridled love and devotion in Jenna’s new contemporary series: Passionate Hearts.