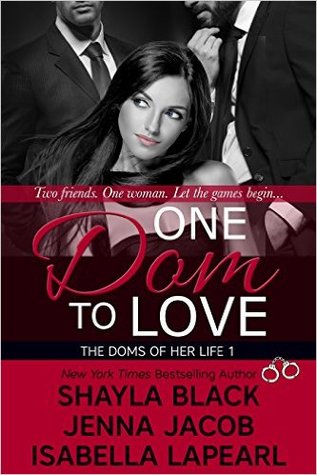 Raine Kendall has been in love with her boss, Macen Hammerman, for years. Determined to make the man notice that she’s a grown woman with desires and needs, she pours out her heart and offers her body to him—only to be crushingly rejected. But when his friend, very single, very sexy Liam O’Neill watches the other Dom refuse to act on his obvious feelings for Raine, he resolves to step in and do whatever it takes to help Hammer find happiness again, even rousing his friend’s possessive instincts by making the girl a proposition too tempting to refuse. But he never imagines that he’ll end up falling for her himself.

Hammer has buried his lust for Raine for years. After rescuing the budding runaway from an alley behind his exclusive BDSM Dungeon, he has come to covet the pretty submissive. But tragedy has taught him that he can never be what she needs. So he watches over her while struggling to keep his distance. Liam’s crafty plan blindsides Hammer, especially when he sees how determined his friend is to possess Raine for his own. Hammer isn’t ready to give the lovely submissive over to any other Dom, but can he heal from his past and fight for her? Or will he lose Raine if she truly gives herself—heart, body, and soul—to Liam?

Raine was an abused child, the last to leave home when she ran away at age 17, six years ago. She was discovered by Macen Hammerman, also known as Master Hammer, lurking in the alley outside his home/Dungeon. He took her in, got her medical attention, paid for her college education and keeps her as a general purpose employee. He’s mad for her, but won’t touch her–or let anyone else do that–because he’s afraid his true desires, to have her enter a Master/slave 24/7 domination contract, break her–just like he experienced with his late wife.

Master Liam is Hammer’s best friend. They have been close since they shared Hammer’s wife in a menage, but that was before Juliet killed herself eight years ago. Now struggling with his own ex-wife’s infidelity, Liam has joined Hammer’s dungeon. He’s attracted to Raine, and confused by Hammer’s hands-off edict. Liam sees that Raine suffers with lack of direction, and lack of affection. And, also, that Raine’s fed up with Hammer ignoring her blatant admiration.

Because Hammer won’t move without a shove, Liam decides to offer to train Raine, and in the interim, her acting out causes Hammer to require her punishment. It’s a heartbreaking moment, but Liam’s the savior Raine’s long-since gave up wanting. Not that anything is simple. Nope. Hammer wants what he now can’t have. And, while Liam wanted to provoke Hammer’s jealous streak, he’s finding himself quite smitten with Raine. Raine’s torn, between the man she’s loved for six years, and the man who seems to want to build a future with her.

While there’s lots of sexy in this one, not all of it is sexy. I wanted to smash Hammer’s nose, at least three times, and felt myself nearly submitting to Liam’s deft charms. Oh, that thick Irish brogue was delicious, too, if only in my mind. The scene is set for a love triangle to best all others, and path that clearly leads to healing via menage for Liam and Hammer. I liked Raine, and Liam lots, and I’m excited to see how their training goes, especially as Hammer’s got plans to thwart it.

Interested? You can find ONE DOM TO LOVE on Goodreads, Amazon, and Barnes & Noble.

Raised an only child, Shayla occupied herself with lots of daydreaming, much to the chagrin of her teachers. In college, she found her love for reading and realized that she could have a career publishing the stories spinning in her imagination. Though she graduated with a degree in Marketing/Advertising and embarked on a stint in corporate America to pay the bills, her heart has always been with her characters. She’s thrilled that she’s been living her dream as a full-time author for the past seven years.

Shayla currently lives in North Texas with her wonderfully supportive husband, her teenage daughter, and a very spoiled cat. In her “free” time, she enjoys reality TV, reading, and listening to an eclectic blend of music.

Bestselling author Jenna Jacob paints a canvas of passion, romance, and humor as her Alpha men and the feisty women who love them unravel their souls and heal their scars to find their happily-ever-after kind of love. Heart-tugging, captivating, and steamy, Jenna’s books will surely leave you breathless and craving more.

Meet the wild and wicked family in her sultry series: The Doms of Genesis. Or become spellbound by the searing love connection between Raine, Hammer, and Liam in her continuing saga: The Doms of Her Life (co-written with the amazing Shayla Black and Isabella La Pearl). Journey with couples struggling to resolve their pasts to discover unbridled love and devotion in Jenna’s new contemporary series: Passionate Hearts.