Hi there! Today I’m sharing a review for a new contemporary F/F romance from Vanessa North. ROLLER GIRL is the third book in her Lake Lovelace series, which includes DOUBLE UP and ROUGH ROAD. The book features a transwoman finding strength, love and community. 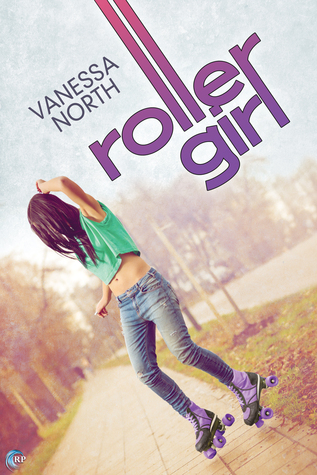 About the book:
Recently divorced Tina Durham is trying to be self-sufficient, but her personal-training career is floundering, her closest friends are swept up in new relationships, and her washing machine has just flooded her kitchen. It’s enough to make a girl cry.

Instead, she calls a plumbing service, and Joanne “Joe Mama” Delario comes to the rescue. Joe is sweet, funny, and good at fixing things. She also sees something special in Tina and invites her to try out for the roller derby team she coaches.

Derby offers Tina an outlet for her frustrations, a chance to excel, and the female friendships she’s never had before. And as Tina starts to thrive at derby, the tension between her and Joe cranks up. Despite their player/coach relationship, they give in to their mutual attraction. Sex in secret is hot, but Tina can’t help but want more.

With work still on the rocks and her relationship in the closet, Tina is forced to reevaluate her life. Can she be content with a secret lover? Or with being dependent on someone else again? It’s time for Tina to tackle her fears, both on and off the track.

My Review:
This is the third book in the Lake Lovelace series and features a trans-female character and a F/F romance. It can be enjoyed on its own.

Tina Durham was a professional wakeboarder who married young, before she could articulate that she was really a woman. This came as a surprise to her wife, and ended their marriage once Tina’s transition became complete. Tina now works as a personal trainer, and struggles with social anxiety, afraid that she’ll be assailed by transphobic people.

Tina meets Joanne “Joe” Delario when she responds to Tina’s frantic call for a plumber. They hit it off, and Tina accepts Joe’s invitation for a drink. Tina’s a bit disappointed when Joe uses the meeting to ask Tina to try out for her roller derby team. Tina’s never played, but the idea of competing again is attractive, and the derby is trans-friendly. She agrees, even if it means not pursuing a relationship with Joe; Joe has a no-dating policy for her team, due to a previous problem with it all going bad. Tina likes the idea of a girl-bonding experience, and she does well at the first try-out.

Despite their intentions, Joe and Tina begin a physical relationship. They’re really too attracted to each other; and Tina hasn’t been with anyone since her divorce. Their interactions are steamy, and affirming. But Tina doesn’t want to be a secret, and doesn’t understand why she should be: other women on the team are dating. It’s Joe’s hang up, and it causes Tina a lot of pain, especially because she’s dealt with secrets most of her life.

I liked the story here. I’ve read a few lesbian romances, and a few trans ones, too. I love the diversity I saw on the page, and Tina’s positive experiences. As a transitioned former pro-athlete, she becomes a bit of a sensation for her team, garnering news coverage. It leads to some great experiences for her with fans in transition. That was really sweet. I also liked her professional persona, and how compassionate she was with her favorite training client, and all her uplifting moments with despairing teammates. That was great. On the flip side, the time frame didn’t match up with the pacing, for me, so the romance felt a bit rushed. Also, the “no dating”/secret dating policy didn’t work for me as a conflict. It felt like a false choice, and brought in unnecessary drama. There were likely other issues that could have kept Joe and Tina separate, that would have had more emotional punch, so that fell a little short, for me.

In all, I expected that Ms. North would write a F/F story that would be filled with heat and heart, and I wasn’t disappointed. I’m not a fan of roller derby, and have about zero interest in it, personally, but those scenes were clear enough that an ignorant reader like myself could follow along, and feel the tension of the team, and Tina’s emotional investment. When I consider adult recreational sports, most are co-ed. Roller derby initially seemed an odd choice, but I understood it, because it was an activity that was exclusively female, and accessible to novice non-athletes. Any other type of sport would have likely been closed-off for Tina, or her less athletic teammates. The friendships, and team dynamics, that Tina explores in the course of the story really helps to pull her loose from her social anxiety, as does her relationship with Joe. For a character who’s growth arc was already enormous before she appeared on the page, Tina still found ways to expand her life and find unexpected happiness.

Interested? You can find ROLLER GIRL on Goodreads, Riptide Publishing, Amazon, Barnes & Noble, and AllRomance. I received a review copy via NetGalley.

About the Author:
Author of over a dozen novels, novellas, and short stories, Vanessa North delights in giving happy-ever-afters to characters who don’t think they deserve them. Relentless curiosity led her to take up knitting and run a few marathons “just to see if she could.” She started writing for the same reason. Her very patient husband pretends not to notice when her hobbies take over the house. Living and writing in Northwest Georgia, she finds her attempts to keep a quiet home are frequently thwarted by twin boy-children and a very, very large dog.