Hi all! Today’s book is a contemporary M/M romance perfect for summer. Why? Because it takes place in sunny Florida and features wakeboarders. Oh, and I have to feature fellow “V” authors whenever possible…

Now, I’ll be perfectly honest here, I know zero about wakeboarding, but I still really enjoyed DOUBLE UP by Vanessa North. It’s quick read with a compelling lead character and a tender romance. 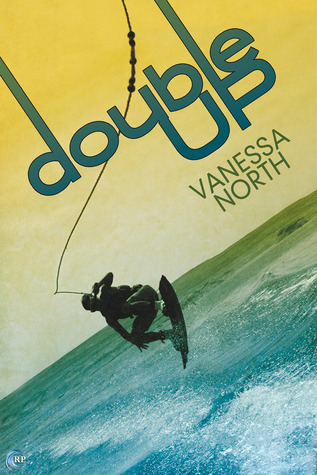 About the book:
Knowing he’s loved can make any man fly.

Fifteen years ago, Ben Warren was a wakeboarding champion: king of big air, ballsy tricks, and boned grabs. Until a career-ending injury left him broken in ways he still has no hope of fixing. Now he takes his thrills where he can get them, and tries not to let life hurt too much.

Then Davis Fox arrives in Ben’s sporting goods store with a plan to get in touch with his estranged brother by competing in the annual wakeboarding double-up contest. The catch? He’s never ridden before. It’s crazy, but Ben’s a sucker for the guy’s sob story—and for his dimples, too—so he agrees to coach Davis.

Davis is everything Ben isn’t: successful, confident, and in love with life. And he wants Ben to love life—and him—too. But before Ben can embrace a future with Davis, he needs to remember how to hope.

First off, I’m going to say I read this book in nearly one evening. I got sucked into the voice of the book and had to let up in the wee hours before work. Ben is a fun narrator. He’s a 40 y/o “washed up” wakeboarding pro who now runs a surf shop in his hometown of Lake Lovelace, FLA. I say he’s washed up, mostly because that’s how Ben talks about himself. He had a serious accident in his last competition busting a bunch of lumbar vertebrae. Frankly, it’s a miracle that he’s walking, let alone giving private lessons.

Still, Ben suffers addiction issues–booze and prescription painkillers. He’s been sober the past 8 years, but he hasn’t gone back for his last corrective surgery too afraid that the post-op medicine will draw him into a pill-popping abyss.

One day a delicious specimen of man arrives in the surf shop–needing lessons. Well, Ben isn’t gonna turn down the money. Especially not when he recognizes Davis as being gay, too. See, Davis has been forbidden contact with his teenaged half-brother, Ridley, because his stepfather is homophobic.  While Ben attempts to teach Davis the basic skills of wakeboarding the heat builds between them. Out together socially, the connection is stronger than Ben has previously had–he’s mostly a hook-up type of guy.

This is perfect for Davis, the connection, that is. He’s a ‘One Man’ kinda guy, and their courtship has such a foreign dynamic for Ben–Davis is bossy and tender and flexible–that it completely unsettles him in the best way. For the first time he’s in a relationship. At least, until Davis finds out Ben’s hiding his back injury. Davis can’t really deal with Ben being one bad landing away from paralysis–but this isn’t why he pushes Ben away.

Fear not, however. Ben learns to face his biggest fears, and in the process reconnects Davis and Ridley in a way that makes estrangement impossible.

The writing is fun and the characters are flamboyant. Ben’s boss/bedbuddy/childhood BFF, Eddie, is a total hoot. Ben doesn’t take himself seriously, but he’s serious about Davis. The connection might have been a touch too quick to develop, but it was handled well. Smexytimes were well-written and steamy. In short, a quality summer read.

Interested? You can find DOUBLE UP on Goodreads, Amazon, and Barnes & Noble. I received a copy of this book from the published via NetGalley. This is my honest review.

Author of over a dozen novels, novellas, and short stories, Vanessa North delights in giving happy-ever-afters to characters who don’t think they deserve them. Relentless curiosity led her to take up knitting and run a few marathons “just to see if she could.” She started writing for the same reason. Her very patient husband pretends not to notice when her hobbies take over the house. Living and writing in Northwest Georgia, she finds her attempts to keep a quiet home are frequently thwarted by twin boy-children and a very, very large dog.

3 thoughts on “He learns How to DOUBLE UP–A Review”