Hi there! I’m so excited to share my review for a new contemporary romance from Daisy Prescott. I really enjoyed the first two books in her Wingmen series, READY TO FALL and CONFESSIONS OF A REFORMED TOM CAT, so I couldn’t wait to return to idyllic Whidbey Island in ANYTHING BUT LOVE.

Check out the links below so you can catch get READY TO FALL FREE (for a limited time) to whet your appetite. 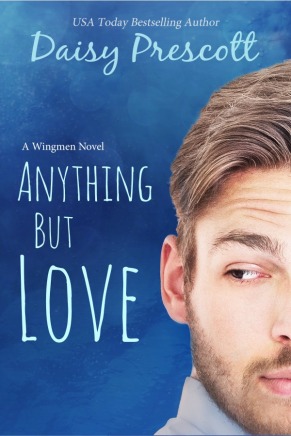 About the book:
Another wingman bites the dust in this enemies to lovers story…
For the past year, I’ve been working my butt off to start my own coffee company on Whidbey. A weekend in Cabo with sun, tiny bikinis, and vacation hook-ups is exactly the kind of tension relief I need.

What I don’t need is a bruised jaw, having to bribe my way out of jail, a hellion set on ruining my life, and my mother seeing a picture of my assets on “The Twitter.”

Caribou Caldwell is my worst nightmare.

Unfortunately, she’s also the star of my sexiest dreams.

What happens when a small town guy becomes the focus of a million fantasies? As Erik Kelso navigates his sudden notoriety, will his feelings for Cari turn out to be anything but love?

Anything but Love is the third book in the Wingmen series, a spin off of Modern Love Stories. Like all Wingmen books, it can be read as a standalone romantic comedy.

My Review:
This is the third book in the Wingmen series, but can be enjoyed on its own. Expect cameos from the other MCs Tom and Jon, but this story is all about the youngest Kelso brother.

Erik Kelso is a 28 y/o single, tri-athlete running a coffee business on Whidbey Island, Washington. He lives with his slightly elder brother, Carter, in a house the locals have dubbed the “Phallus Palace” because it’s just the two dudes and Carter isn’t shy with the ladies. Erik actually is. He rarely dates and hooks up even rarely. His life is pretty much Whidbey Joe, training, and taxiing his drunk father home from local hangouts.

Carter and Erik sneak off on a low-budget Cabo vacation and the final night out is a whirlwind. Erik and Carter hit a bar, Erik bumps a gal with a D-Bag boyfriend who proceeds to spark a fight. While sweet-talking the policia is not his specialty, he manages to keep both himself and the D-bag from arrest for a mere $50. The girlfriend isn’t thrilled, even if she’s smoking. Erik can’t believe such a fox would hang with such a loser.

The next day, Erik and Carter go cliff-diving, and Erik takes a dive sans suit. He’s got a tight body from all his training, and he’s not especially shy about it. He’s not quite prepared to have his butt plastered all over the Interwebs, with speculation that those Buns of Glory belong to a popular celeb, however. When the hordes learn they don’t, the chase is on to find out WHO IS THAT GUY!!!

Mortified, Erik does some tracking to find out the source of his shame–none other than the smoking girl from the bar. He tries to legal eagle his way out of the mess, but he can’t; no one can find Caribou, that bar gal who pretty much haunts Erik’s sexy dreams. And when Cari shows up on Whidbey to set the record straight, well, the t-shirts will fly.

Oh, this was a rollicking romp of a romance. It’s really fun because Erik is a near-recluse with phobias that play out in his horror-soaked brain. Like, he’s always thinking someone bad–or even, say, zombies–might attack, and how to survive in the advent of an apocalypse. It did crack me up. He’s painfully shy around women, but talks a big game in front of his dude friends–which was a fun juxtaposition. He’s also very sensual, and when he and Cari do connect, it’s hot. Lots of special attention, and extra orgasms.

In the meantime, he’s fending off the cougars who pretty-much make a game of spotting his butt and posting pics on the ‘net. There’s an exuberant ‘zine gossip columnist who makes it his mission to bag this Hot @ss Guy, and the web posts are a scream.

I liked the enemies-to-lovers angle. I liked Erik’s weirdness and awkward approach to everything. For being an introvert, Erik’s a very approachable character, endearing and sweet. I really connected to his internet infamy and the fear that his mother might find him bared to all. It’s so true that once posted, it’s there forever, and it was really interesting to have a male character react to such a predicament. His constant embarrassment is entertaining to everyone, except him, and yet he’s totally good-natured about it. Still, he does manage to turn his 45 minutes of fame into some new business that helps out his folks and others in the community. He and Caribou have their HEA and the book sets up two more books in the series, for singles Carter and Dan.

As a critique, I had a little trouble getting into the story. The book is written in first person-POV and Erik’s name isn’t mentioned until Chapter FOUR. I kept turning pages, waiting to see who was telling me this story, and that was a pretty long wait. It made it hard for me to connect. Also, Erik’s a little agoraphobic, suffers a little anxiety and a little ADHD, I think. His thoughts zip along faster than my 7 year old on Pixy Stix. Just saying that I had a teeny bit of trouble keeping up at times. Especially when he dipped into his “survival modes.”

I really did enjoy, and look forward to further Wingmen shenanigans.

Interested? You can find ANYTHING BUT LOVE on Amazon, iBooks, Barnes & Noble, and Kobo.

PREVIOUS BOOKS IN THE SERIES

Get READY TO FALL (Wingmen #1) for FREE!

About the Author:
USA Today Bestselling author Daisy Prescott lives in a real life Stars Hollow in the Boston suburbs with her husband and an indeterminate number of imaginary housegoats. When not writing about people falling in love, she can be found traveling, gardening, baking, and reading a good book. Her novels include the Modern Love Stories series, the Wingmen series, and several short stories. She’s also working on expanding the world of Bewitched this fall.

One thought on “Uncomfortable Truths Might Be ANYTHING BUT LOVE–Review And Get A FREE Book!”