Hi there! Today I’m sharing a review for a M/M/M menage contemporary romance from LA Witt. HIATUS is a bittersweet, but realistic, read featuring a married couple who is divorcing and their third–who tries to keep them together. 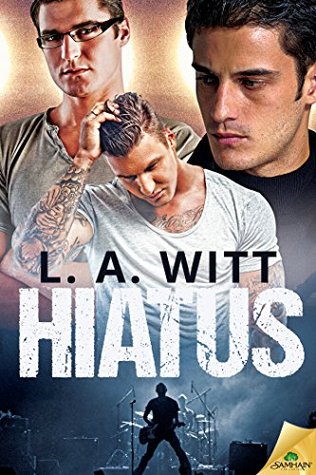 About the book:
Three’s a disaster when things come unraveled.
Rock star Nate Keller is on top of the world, but his headlining tour has one drawback. It keeps him away from his boyfriends, Theo and Cameron, for weeks at a time. Yet after four-and-a-half years—and a lot of hard work—the trio is still going strong.

But then Cam comes to visit with devastating news. After seventeen years together, he and Theo have agreed to a trial separation. Nate tries desperately to fix his lovers’ broken relationship, but there’s only so much he can do from the road.

At home, Cam tries to carry on, but feels like his whole life is spiraling out of control. Theo struggles to cope with the split as his depression worsens. They’re both spinning their wheels, quickly losing hope they can keep it together—and keep the man they both still love.

Desperate, Nate drops everything in a last-ditch attempt to pull their trio back together before they hit rock bottom. Except their love could already be shattered beyond repair.

Warning: Contains two men who must face how broken they are before they can fix their failing marriage, and the man who loves them both—but doesn’t know how to save them.

My Review:
This is a bittersweet menage M/M/M story that explores a disintegrating marriage, and the reasons behind the collapse. It has a happy ending.

3.5 stars.
Cam and Theo are a married couple. They’ve been together 17 years–since college–and just over four years ago met Nate, singer in an up-and-coming band. They were up for some fun, and it worked so well, that Nate joined them, permanently.

Well…the book opens with Nate ecstatic for one of his rendezvous nights on the road with his sexy boyfriends, only to find Cam waiting for him. Because Theo is moving out of their house back in LA. Nate’s blindsided and hurt, and Cam’s a mess. They make love, but it’s bittersweet.

What Nate learns, as he strives to get his men back together is that Theo’s been suffering depression for a long time. And, Cam’s been struggling with borderline-OCD and panic attacks for a long time, and neither noticed the other’s problems because they were too wrapped in their own mental illness.

There is a lot of bitter in this book. There are also points of extreme sweetness. As a person who’s suffered depression, I felt it was more bitter than sweet. As a person who’s weathered rough patches in a long marriage, it was raw to experience echoes of similar distance in the characters on the page.

It ends with a very reasonable and relatable and realistic reunion. That was really satisfying, but I still had a LOT of angst–some on the page, some of my own baggage–to heft before I got to the good parts. Those good parts coming at the very end of the book.

Poly romances are often hard to relate to, but it’s not hard to relate to the unraveling of love. Nate was such a dear, really stoking the fires to get Cam and Theo to reconcile, but his efforts were in the wrong place, because only the people breaking up can do the making up–as Theo and Cam realized.

The mental illness issues were carefully described, and felt very real–especially the depression as I have first-hand experience with that. I liked how the solution was never complacent, not: “we’ll get over it.” Once Cam and Theo claimed their issues, they got productive help managing their emotional state. Part of their delay seeking counseling was fear that any marriage counselors would tell them they needed to cut Nate loose. I could relate with that fear, as poly relationships are not given the same weight as marriage, and that prejudice proved a hindrance to their health. Still, there were several lights at the end of the tunnel, and the end proved to be both happy and sexy.

In all, it worked for me. I just wished it had been a little more upbeat.

Interested? You can find HIATUS on Goodreads, Samhain Publishing, Amazon, Barnes & Noble and AllRomance. I received a review copy via NetGalley.

One thought on “Stuck in the Middle–HIATUS–A Review”