Hi there! Today I’m sharing a release day review for a new M/M romantic suspense from HelenKay Dimon. MR. AND MR. SMITH is a spy/counter-spy drama that features two US agents abroad who meet, fall in love, and then discover neither is who they claim to be. For these agents to survive, they have to trust one another–when they probably shouldn’t. 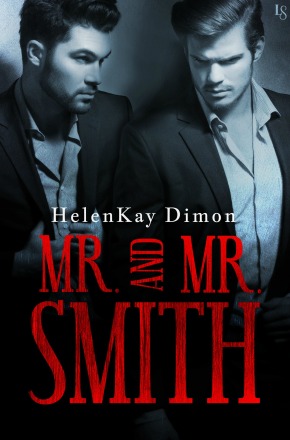 Secrets and seduction make for an explosive combination in HelenKay Dimon’s edgy, thrilling new series, which kicks off with a novel about two men who can handle any threat—except the one posed by desire.

Fisher Braun knows how to keep a secret. As a covert paramilitary operative, his job—and his life—depends on it. He’s at the top of his game, ready for action and always in control. No enemy has ever brought him to his knees, but one lover has: Zachary Allen, the man currently sharing his bed. The perfect package of brains and brawn, Zach is someone worth coming home to, and Fisher hates keeping him in the dark about what he does. But the lies keep Zach safe. Until the day Fisher loses everything. . . .

Zachary Allen is no innocent civilian. Although he plays the tech geek, in reality he’s deep undercover for the CIA. In a horrible twist of fate, the criminal enterprise he’s infiltrated has set its sights on the man whose touch drives him wild. Zach would do anything for Fisher—except blow his own cover. Now, in order to save him, Zach must betray him first. And he needs Fisher to trust him with all his heart if they want to make it out alive.

Fisher is a CIA operative working in London as part of a well-oiled extraction team. The book opens with Fisher’s house being invaded and the message that his secret lover, Zach, has been kidnapped. Fisher must now come clean to his team about his sexuality (funnily enough none of these guys had any misconceptions of Fisher’s sexuality…) and his lover.

The attempt to recover Zach turns Fisher inside out and upside down. Mostly because Zach’s on the wrong side of the gun. Yup. Is Zach, as he later claims, a deep cover operative investigating international human trafficker organization–Pentasus? Or, is Zach just a bad dude.

The rest of the book is Fisher and Zach coming to terms with their secret lives. They had been living together, secretly, for months, and Fisher had thought he’d found a man to spend his life with–until Zach’s Big Secrets are revealed. The time frame of the book is really compressed–the whole span is roughly 48 hours, so we have an hour-by-hour unfolding of their relationship–from fury and betrayal, to reconnection and resolve.

Zach must get back to his role, and Fisher thinks it’s a suicide mission. It likely is–except Fisher won’t stand for it.

Expect hate sex, make up sex, making love and lot and lots of explosions. For me, I wanted a bit more of Fisher and Zach, on the page. It was tough coming in at such an adversarial moment, and it took a while for me, as a reader, to catch up. I really loved the ending, and I look forward to more books in this setting–clearly we have some men to catch up with in a new book. (HUNTER AND WILL!!)

Interested? You can find MR. AND MR. SMITH on Goodreads, Amazon (US, UK) Barnes & Noble, Kobo, iBooks, GooglePlay, and BAM.

About the Author:
HelenKay Dimon spent the years before becoming a romance author as a divorce attorney—not the usual career transition. Now she writes full-time and she’s much happier. The author of more than thirty novels, novellas, and short stories that have twice been named “Red-Hot Reads” and excerpted in Cosmopolitan, she’s on the board of directors of the Romance Writers of America and teaches fiction writing at UC San Diego and Mira Costa College.