Hi there! Today I’m sharing a review for a newly release contemporary M/M romantic suspense from Annabelle Jacobs. CHASING SHADOWS features a grieving man who finds more than he expects–including love–when he sets out to collect the belongings of his missing, presumed drowned, brother. 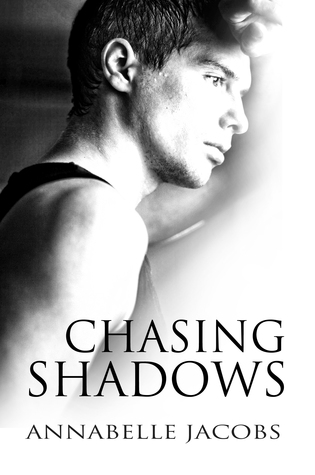 About the book:
Jamie Matthews goes to Cornwall to find his missing brother. The police are convinced Michael drowned, but Jamie knows better. No way would Michael swim to his death, especially on a beach with a wicked rip tide. Finding a stranger in his brother’s cottage only deepens his misgivings.

Felix Bergstrom is recently discharged from the British Army. Unable to put the past behind him, he takes an unhealthy interest in old acquaintance and millionaire businessman Karl Weston, hoping to catch him up to no good. Michael’s disappearance adds fuel to Felix’s suspicions. Weston’s clifftop home overlooks the beach where Michael supposedly walked into the sea, but Weston has an alibi for that day.

When Jamie and Felix meet, the physical attraction is instant. Mistrust keeps them from acting on it until finally all their secrets are laid bare. But time isn’t on their side. Before they’re able to work out whether they have a future, danger catches up with them and threatens to put an end to everything.

My Review:
4.5 stars for this contemporary M/M romantic suspense.

Jamie Matthews is heartsick over the apparent drowning of his water-phobic younger brother, Michael. He goes to Cornwall to pack up his brother’s effects from the rental cottage he’d taken–and hoping to investigate a bit more himself. He can’t believe Micheal would willingly enter the roiling ocean he’d been so carefully sketching, no matter how hot the day had been. Jamie’s grief is so acute, and so accessible. He and Michael were best mates, shared an apartment together and all once they both left uni. Being without his brother is a constant nagging ache that brings Jamie sleepless nights and loss of appetite.

Jamie meets Felix Bergstrom, caretaker for Michael’s cottage and a former British Army soldier. Felix has his suspicions about a recent emigre to the Cornwall coast: Karl Weston, an old army acquaintance and millionaire businessman. Felix believes that Weston may have had a hand in the death of their mutual friend, Jason, less than a year ago. Felix has been maintaining an unofficial surveillance on Weston over the last several weeks, but never noticed Weston and Michael interacting. Like the police, he believes that Michael drowned.

Jamie doesn’t trust Felix–not after he finds him in the cottage rummaging through Michael’s belongings. He can tell Felix is holding back information about Weston, and–because he’s grasping for any information about Michael–that burns. Felix does have some sympathy, and is encouraged by his friends to confess all he knows about Weston, however little it helps Jamie.

During the several days they spend together in close proximity, Jamie and Felix sense an attraction. Jamie is wracked by grief, and Felix is a willing outlet for that sorrow and frustration. I liked how well they got on, once they began…

Naturally, things go awry. And that’s where the suspense builds. This comes at the near tail-end of the book, with a dramatic discovery, terrific impatience and more than one unexpected turn. I really liked how Weston was characterized. He’s this suave, smarmy guy, with ultimate confidence. And, he’s so manipulative, but in a way that gets his way and lets you know he’s taking it. He’s smug, and stone cold, and never felt overblown or cartoony. We don’t deal with Weston much, in person, but when we do, he leaves an impact.

Felix and Jamie are really such a good pair. I’m glad that they could get past their insecurities enough to find some peace. The end is a spectacular reveal, with an HEA that may surprise. For me, I was very satisfied.

Interested? You can find CHASING SHADOWS on Goodreads, Amazon, Barnes & Noble, All Romance and Smashwords.

About the Author:
Annabelle Jacobs lives in the South West of England with her three rowdy children, and two cats.

An avid reader of fantasy herself for many years, Annabelle now spends her days writing her own stories. They’re usually either fantasy or paranormal fiction, because she loves building worlds filled with magical creatures, and creating stories full of action and adventure. Her characters may have a tough time of it—fighting enemies and adversity—but they always find love in the end.

One thought on “A Grieving Brother CHASING SHADOWS–A Review”