Hi there! Today I’m sharing a review and giveaway for a sweet and sexy contemporary M/M romance from Morticia Knight. ROCKIN’ THE ALTERNATIVE puts a journalistic fan boy in touch with his favorite signer/songwriter, and the results are explosive. The book is currently on sale for $.99 through May 25th!

Catch the review and enter the giveaway for some cool book swag below! 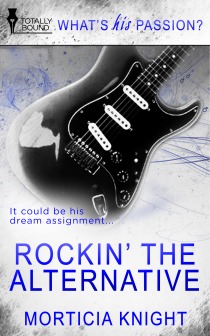 About the book:
The chance of a lifetime and the touch of a rock god are offered to music journalist Bryan Gallagher on the same day. Embracing one is easy, but resisting the other is harder than he’d anticipated—especially since Bryan has never been with a man.

It could be his dream assignment. Aubrey King, the legendary god of alternative rock music has requested to meet with journalist and writer Bryan about penning the star’s memoir. Aubrey and his dark, angsty songs are the reason Bryan was inspired to become a leading rock journalist. His obsession for his career has alienated the women in his life, but Bryan doesn’t care. What really matters to him is the music.

Aubrey King has been out of the music scene for almost ten years—ever since his alternative rock band, Falling in Stereo, broke up. Questions about his sexual preferences have always surrounded him, and now that he’s ready to make a solo comeback, he wants to tell his story, his way. He’s followed journalist Bryan Gallagher’s career for a while and believes that Bryan’s obvious passion for music mirrors his own. He loves his writing style, but is also enraptured by the boyishly handsome writer.

Bryan finds pushing his fanboy nervousness aside is difficult when Aubrey finally stands before Brian. He’s amazed at how little Aubrey has changed—his intense gaze, his unique style and his still youthful looks epitomise the star he’s always been. But Aubrey’s vulnerability when he sings and shares the deeply personal lyrics of a new song triggers something in Bryan that he never knew was there. The need to give himself to Aubrey, to let the rock god do to him what he’s never before desired a man to do.

My Review:
Aubrey is a rockstar working on a comeback. He’s been disenchanted with his fellow musicians who seem to only be out for money. Aubrey’s kept a good bit of himself private for the sake of “the business” and he’s unwilling to sacrifice any longer. It’s interesting that he seems to have a crush on a young, but prolific, rock writer–Bryan Gallagher, so much so that he’s willing to divulge his biggest secret–his sexuality–to only Bryan, if Bryan will agree to write his memoir.

Bryan Gallagher has been a fan boy of Aubrey King’s music since forever. His love of rock caused him to seek a career in writing, and Aubrey’s music was a huge reason for that passion. Their first meeting is more like a date, and Bryan is both flattered and unsettled. His admiration for Aubrey is keen, and the suggestion that Aubrey may want him for more than his skills as a writer is terrifying, in an exciting way.

This is a quickie love story, with Bryan willing to try and accept Aubrey, as a man and lover. Bryan’s never had a solid relationship with a woman, but he’s also never been attracted to men. Bryan’s hero worship of Aubrey causes him to take a giant leap, and he finds he’s far less repulsed by a physical experience than he might have guessed. I really liked the vulnerability of both men, and how they talk–although the this whole story unfolds over a very short period–about their feelings and fledgling attractions. It gets hawt up in there pretty quick, with a connection that feels deeper than instantaneous likely due to their mutual professional admiration.

This novella has a sequel novel, ROCKIN’ THE FUTURE, releasing June 14th.

Interested? You can find ROCKIN’ THE ALTERNATIVE on Goodreads, Pride Publishing, Amazon (US, UK, AU, and DE) and AllRomance. It’s currently on sale for $.99 through May 25th.

Click on the  for your chance to win in the big sales blitz-book tour giveaway. For the next three weeks Ms. Knight will give away two small prizes a week, and all entrants will be eligible for the big prize pack giveaway following the book tour. The first giveaway is for exclusive coffee mugs with Morticia’s official Author logo on it!

(To see the weekly giveaways visit Morticia Knight’s site. There is a list of all the blogs participating in the blitz where you can visit and comment for additional entries into these giveaways, as well as a new post each week with that week’s giveaway items.  The winners will be chosen via rafflecopter)

3 thoughts on “Time For ROCKIN’ THE ALTERNATIVE–Review and Giveaway!”