Hi there! I’m so excited to share a review and giveaway for an new contemporary M/M rock romance from Morticia Knight. You know how I loved ROCKIN’ THE ALTERNATIVE, and ROCKIN’ IT FOREVER is the full-frontal sequel, sharing Bryan and Aubrey’s love with each other and the world.

Catch an excerpt, my review and enter to win one of three stunning prize packs below! 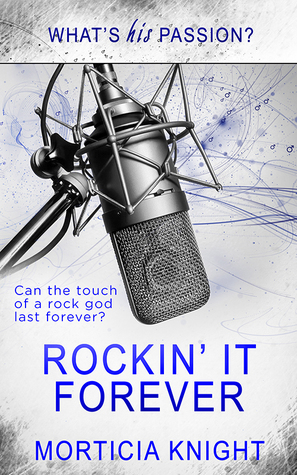 About the book:
Music journalist Bryan Gallagher’s life has completely changed in an unexpected way. Not only has he snagged a dream assignment as the memoirist to alternative music’s rock superstar Aubrey King, but he’s also promised to give the beautiful and enigmatic musician a chance for them to forge a relationship. It’s all very overwhelming for Bryan since, up until he spent a sexually charged day and night with Aubrey, Bryan has never even dreamed of being with a man.

Aubrey is completely smitten with the boyishly handsome, young rock writer, Bryan. After their instant spark grows into something more, Aubrey is desperate to keep Bryan by his side for always. He’s promised Bryan that their love is for real, that Bryan isn’t simply one of his rock star conquests.

Their road isn’t an easy one, though. Despite their deepening bond and growing need for each other, other factors intrude. Neither Aubrey nor Bryan is ready to come out, and their relationship needs to remain a carefully guarded secret. In addition, Aubrey has to answer to the demands of his profession and Bryan has to traverse the shifting waters between his personal and business relationship with his famous lover.

Then a secret is revealed and everything in their joint world implodes. When a love is so strong that two men can barely take a breath without thinking of the other, will that be enough to bridge the loss of trust? The only way they can rock their love forever is if Aubrey can reach Bryan before it’s too late.

Aubrey barked out an easy laugh and Bryan joined in. Once they’d gotten a hold of themselves, Bryan spoke up again.

“This is probably going to sound really stupid, but I have to ask.”

“Ask me whatever you want, Bry. I don’t want you to think I’ll mock you in any way. I get it, man. This is all new. Unexpected. You didn’t sign up for it and I guess…”

Bryan waited, but it seemed as if Aubrey might not continue. “You guess?”

“Aw, man. I suppose if I want you to feel free to say anything, I should give you the same respect. Like we said before—no games, no bullshit. Right?”

“Well, I’m worried I pushed you too fast. I’m not gonna lie. I wanted you before I met you, I… Shit.” Aubrey mumbled something unintelligible. “Fuck. We should wait to have this conversation in person.”

Bryan swallowed down the fear of what Aubrey might be about to reveal. “Come on, Aubrey. You’ve already brought it up and it’ll be at least a couple days before we can talk face to face.”

Aubrey let out a slight groan on the other end. It didn’t sound happy. “Please, Bry. Please don’t be angry. I care about you. I believe in you as a writer. I wouldn’t want anyone else to do my memoir—I’d rather not do it at all if that were the case. This isn’t just about sex. For real, no games.”

“That’s… That’s all wonderful. But I don’t see how that would make me angry.”

What amounted to a small, strangled noise could be heard from Aubrey. “I only decided to do the memoir so I could have the chance to meet you.”

Aubrey’s confession was like a rock that had landed in the pit of Bryan’s stomach. “You… You what?” He breathed in through his nose a few times, his heart pounding at the thought he’d been played by the master player.

“Bry, baby, please listen. Think about it. I couldn’t very well call you up and ask you out on a date. I had no idea if you were gay or straight, or open to the possibility of exploring or if we’d click… Anyway, I wasn’t about to send you an email inquiring if you’d ever considered whether your sexual options should include cock.” Aubrey mumbled a ‘fuck’ under his breath. “Do you know how difficult it is to meet a decent guy in my position? Someone who I might actually have a real connection with, who might ‘get’ me?” Aubrey’s voice had risen in pitch. He paused, then sighed before speaking again. “I’m a public figure. I’m in the closet. The men I meet only want to put their dick into a celebrity or they want an out and proud partner. The few others who might be prospects are usually a part of the circle I’ve always traveled in—sanctioned members of the wretched institution we call the music business.

“I don’t like the industry. I hate the corporate machine. Does that mean I’m biting the hand that feeds me? Probably. But I can’t help it. I came back to the music biz because I decided I had more I wanted to say. I don’t need the cash. The adoration is great, as long as it’s from a place of sincerity, from a love of the tunes. But I don’t need that mindless hero worship I once had.”

Aubrey lowered his voice, spoke with a pleading tone that gripped Bryan’s heart. “I need real. A genuine bond. A future with the possibility of love. Everything I said to you before was the absolute fucking truth, Bry. I’ve been looking for someone who speaks the only language I understand, the language of music. When I asked you if you might be that someone, I said it from my heart. Yeah. I orchestrated our meeting and I’m damn glad I did. Because you’re the best person I’ve come across since I can remember and I’ll do anything to be worthy of you.”

Bryan Gallagher is a rock writer who has signed on to write the memoir of his rock idol, Aubrey King. In their first meeting Aubrey made it clear that he’s gay, closeted, and totally attracted to Bryan. They shared a weekend of sexual exploration together, and separated with the promise to reunite in a week–after Bryan settled his affairs (temporarily) in New York and Aubrey appeared at a concert in Italy.

Time and distance certainly makes these hearts grow fonder, and they become bold when they meet again. Bryan’s supposed to stay at an apartment in LA, but Aubrey convinces him to stay in his home. There, Bryan and Aubrey explore each other, in depth. The bond between them is strong, and growing, but neither man is ready to come out. Bryan’s never been with a man, and Aubrey has had horrible problems with homophobic band mates in the past. He can’t bear to suffer that emotional abuse again.

Still, Aubrey’s inner circle recognize the relationship for what it is, and one of Aubrey’s ghosts decides the time is ripe for another shake-down. In the middle of everything, keeping their growing love a secret proves to be difficult, and pointless.

The pace of the book is good, with the span of time roughly several months. There are moments of intense heat, and sweet longing, and dismay for separations. Aubrey’s both smitten and stubborn. He wants Bryan all the time, and struggles with how to accomplish a lasting relationship under cover of the memoir. He’s sure that at some point Bryan will tire of him, or finish the book. Then what? Bryan is conflicted. His friends all assume Aubrey’s gay, and he’s hard pressed to keep denying his own changes. That said, Aubrey’s the one person he’s connected with at so many important levels. Could he come out? Would Aubrey and he make it in the long run, if he did?

I liked how compassionate these guys are, and how they took care of one another, but I was frustrated with how quickly Bryan was able to walk away when faced with a problem. That said, we didn’t spend a ton of page time in angst about loss. Just the pertinent scenes, which were heartbreaking. The reunion at the end was pretty much epic and I think readers will really enjoy how it all worked out.

Interested? You can find ROCKIN’ IT FOREVER on Goodreads, Pride Publishing, Amazon, Barnes & Noble and AllRomance.