Hi there! Today I’m sharing a review and giveaway in support of a new LGBTQ anthology coming May 18th from Torquere Press. THEORY OF LOVE is a series of short stories that will make sci-fi fans hearts go pitter-pat. 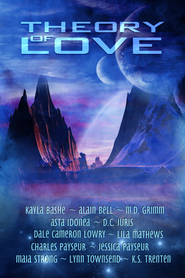 In Theory of Love, we wave our geek flag high! Tales from deep space, sci-fi realities, technology, academia, and cosplay are brought together in this collection.

In Dale Cameron Lowry’s Far From Home, long-distance spouses fan the flames of passion while fighting to save humanity. Meat Space by Lynn Townsend, brings virtual space and the real world crashing into a new reality. Asta Idonea’s Captive shows us that love can form in any manner of situations. Beta Tester by Charles Payseur immerses the reader—and the characters—in a virtual reality that brings a friendship to a whole new level.

K.S. Trenten’s A Symposium in Space, love is a different meal to every guest. Unexpected Dilemmas by Jessica Payseur long-distance lovers face hijacking and natural disaster to be together. Kayla Bashe’s Medic to the Hivemind a stranded student is saved by a mysterious voice with secrets. Being Jake by Lila Mathews shows readers that smart is sexy. In D.C. Juris’ Torn Apart, love provides the will to survive. Shattered Space by Alain Bell shows how love can grow from destruction. Maia Strong’s All ‘Ships May Sail connects cosplay, fandoms, and something more. Trash and Treasures by M.D. Grimm gives us a deal made in interstellar space that could be more than either party bargained for.

In theory, love is easy.

From Trash and Treasure by M.D. Grimm

Some of the coldness left Ronan’s eyes. He seemed confused again. Why did Tucker seem to confuse Ronan so much?

Then it happened. Ronan nodded. “Deal.”

Tucker tossed the ball underhand to Ronan, who caught it with a startled expression.

“What?” Tucker said. “It’s not like you can go anywhere. Your ship’s caput and even if you tried to hack into my navigation system, you wouldn’t get far. My ma designed it and she was the best there was. Just letting you know in case you had a thought of bashing me over the head and commandeering my ride.”

Ronan looked insulted. “I would never do such a thing. I am not a thief or vagabond.”

“Then what are you?”

Ronan’s mouth pulled into a thin line. Tucker shrugged. “Fine. Keep your secrets. Come on, follow me. Let’s both take a well-needed shower.” A blush suddenly crept up his face. “I mean, a shower separately. Let’s take a shower—oh, never mind. Just come on.”

He turned his back on Ronan and called himself an idiot. He dearly hoped he wasn’t making a huge mistake. But he wouldn’t go back on it now. He really, really wanted to have sex.

This is a fun and interesting collection of tales that span genres from contemporary romance to high SciFi–so there’s a little bit of something for all readers. Also, some of the stories are M/M, others are F/F. Not all of the stories have explicit sex, not all the characters are human, and the length of story is variable accommodating quick reads–creating an inclusive environment for readers.

In particular, Meat Space by Lynn Townsend, was interesting. It’s a dystopian futurescape where most of humanity is part of a collective virtual reality, and some of the participants are summarily disconnected due to a virus. One man, who is horrified by his real and aged body, learns to live in reality, and finds love with the man who introduces him to fantastic experiences like eating, and kissing, and sex.

Beta Tester by Charles Payseur was SO sweet! It revolves around a virtual reality game reviewer who inadvertently enters a dating sim game. It belongs to his best friend, and it soon becomes clear that these guys have hidden feelings for the other… yummy!

Kayla Bashe’s Medic to the Hivemind was a great survival story of a woman trapped on a hostile planet who only made it due to the woman who intercepted her distress call, and kept talking to her through days and nights until her eventual rescue. Expect gruesome alien adventures!

Shattered Space by Alain Bell was a tender survival romance between a warrior and the medic she’s admired for too long. Now that their ship has been ripped apart in battle, can the soldier save her healer? (Spoiler…probably!)

Maia Strong’s contemporary F/F romance in All ‘Ships May Sail made me giggle with glee as two Xena: Warrior Princess cosplayers meet and connect at a con. Explicit read, with serious heart, and playful sexytimes.

There are many other stories to enjoy here. If you like SciFi and gay tales, this might be a good one to pick up. I particularly like the short story format, because it allows me to read a few stories in a sitting, and then close the book and get on with my “real life” tasks–without that nagging sensation of a story left unread. Plus, I can move through them super-fast.

Interested? You can find THEORY OF LOVE on Goodreads and Torquere Press in advance of its release May 18th.

Click on this Rafflecopter giveaway link for your chance to win a copy of THEORY OF LOVE.
Good luck and keep reading my friends!