Hi there! I’m so excited to share a review for a a new novella from Laurelin Paige. FALLING UNDER YOU is a spin-off from the Fixed series, featuring CFO Norma Anders finding love where she least expects it…in her own office. As you know I really enjoyed FIXED ON YOU and HUDSON, so I jumped at the chance to get this one. 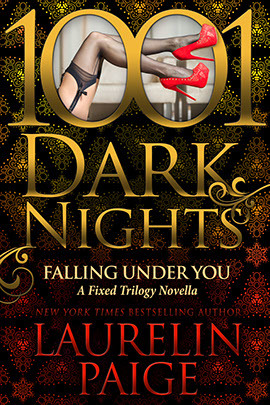 Norma Anders has always prided herself on her intelligence and determination. She climbed out of poverty, put herself through school and is now a chief financial advisor at Pierce Industries. She’s certainly a woman who won’t be topped. Not in business anyway.

But she’s pretty sure she’d like to be topped in the bedroom.

Unfortunately most men see independence and ambition in a woman and they run. Even her dominant boss, Hudson Pierce has turned down her advances, leaving her to fear that she will never find the lover she’s longing for.

Then the most unlikely candidate steps up. Boyd, her much-too-young and oh-so-hot assistant surprises her one night with bold suggestions and an authoritative demeanor he’s never shown her in the office.

It’s a bad idea…such a deliciously bad idea…but when Boyd takes the reins and leads her to sensual bliss she’s never known, the headstrong Norma can’t help but fall under his command.

I groaned and threw the covers off of me, heading for the shower. Usually I ran first, and I still planned to, but I needed something to cool the fire in my veins. Hopefully standing under an ice cold stream of water would do the trick.

I tried running next, opting for ten miles instead of my normal six, thinking maybe I could sweat out the lust like it was a cold. Or was that a fever? Whatever, I came back tired, achy and soaked in perspiration, and the buzz between my legs was stronger than ever.

I was distracted by it through the rest of the morning. Gwen and I caught up on America’s Got Talent before she planned to go to bed for the day—her job at a nightclub kept her on a strange schedule. Afterward, I couldn’t remember a single thing I’d watched, but I could recall with clarity every moment I’d spent with Boyd the night before. That wasn’t a subject I planned on discussing with Gwen, though. So most of my responses to her were nods and grunts. Then she’d gone to sleep, thankfully, except after that I was left alone with the agony of my desire.

The rest of the night was more of the same, and Sunday as well. By Monday morning, I’d run over twenty miles, cleaned my entire house, taken five showers, and not thought about Boyd Barrett about a thousand times. Maybe even two thousand times. And now I had to go to work and face him.

I decided to go in early. That way I could sneak into my office without having to pass him on the way in. It wasn’t until I was in the elevator on my way to my floor that I remembered I also didn’t want to see Hudson. Several years with a clean, respectable work record, and in one evening I’d shattered my reputation with not one, but two, colleagues. The two colleagues who were the most important to me, no less.

Jesus, maybe I did need to quit.

It wasn’t yet seven, but it wouldn’t surprise me if Hudson were already working. Often, he slept in the loft above his office, which made an early appearance more probable than one from Boyd. Anxiety rose in my chest, an odd feeling for me since I was usually composed and calm. As soon as the doors opened, I ducked my head and scurried down the hallway, letting out a sigh of relief when I made it past Hudson’s office without seeing him.

And then gasping sharply when I ran into him, instead, outside my own office.

“Norma, I was hoping you’d be here early. I wondered if I could have a few minutes of your time.”

Norma is a Take Charge professional woman who struggles to find a man that can satisfy. She longs for a man who isn’t intimidated by her brusque personality and workaholic lifestyle. For Norma, the man must be more “alpha” than she is, able to take charge in a way that allows her to relax her iron control. She *thinks* her boss, Hudson Pierce, might be the right man, but he rebuffs her without a second thought.

She never expected her personal assistant, Boyd, would be the stand-up man she craves, but he’s got a dominant side he’s kept hidden, alongside his smoldering attraction for her. Norma’s put off–at first. Boyd’s eight years younger, and her assistant–besides not wanting to lose his professional skills, there’s a work-place regulation prohibiting dating between status classes. Still, Boyd turns her on, and turns her inside out.

I liked this one, a lot. Boyd’s a fantastic character, and he’s so good for Norma. I think I just wanted more. More of their loving sides, more of their relationship building…just more. Their story is so wonderful, I want more than a novella! *shrugs*

Interested? You can find FALLING UNDER YOU on Goodreads and Amazon.

USA Today and New York Times Bestselling Author Laurelin Paige is a sucker for a good romance and gets giddy anytime there’s kissing, much to the embarrassment of her three daughters. Her husband doesn’t seem to complain, however. When she isn’t reading or writing sexy stories, she’s probably singing, watching Game of Thrones or The Walking Dead, or dreaming of Adam Levine. She’s also a proud member of Mensa International though she doesn’t do anything with the organization except use it as material for her bio. She is represented by Rebecca Friedman.

One thought on “Getting it Good–FALLING UNDER YOU-Excerpt and Review!”