Hi all! Today I’m reviewing a new release from Laurelin Paige. HUDSON is book four in the FIXED series. Last week I started book one, FIXED ON YOU, and–frankly–I couldn’t stop. It’s a sexy contemporary romance that is sure to be enjoyed by fans of FSOG or the THIS MAN series. 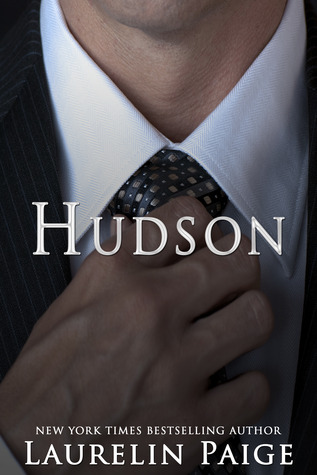 About the book:
“I can easily divide my life into two parts—before her and after.”

Hudson Pierce has led a life few others could even imagine. With money and power at his fingertips, he’s wanted for almost nothing. He’s never experienced love, however, and he’s seen few examples of it in his dysfunctional family. The ridiculous notion of romance has always intrigued him. He’s studied it, controlled it, manipulated it, and has yet to understand it.

Until he meets Alayna Withers.

Now, the games he’s played in his quest for comprehension can finally come to an end. Or are they just beginning?

Told from his point of view, Hudson fills the holes in his love story with Alayna Withers. His past and relationship with his long-time friend Celia is further revealed and light is shed on his actions during his courtship with Alayna.

My Review:
This book is the fourth in a series, and it should really be read in order–otherwise there will be spoilers to the first three books. See, in HUDSON, we get an intimate portrait of what shaped his life, and how all of this changed when Hudson met Alayna Withers.

Hudson Pierce is a cold, sterile void of a man. He’s grown up in a family where his parents became estranged early in their marriage, and yet never divorced. His mother floated into alcoholism to cope with her loneliness, whereas his father resorted to trysts to assuage his need for connection. The only person for whom Hudson holds any true affection is his younger sister, Mirabelle. In fact, it is on this romantic sibling that Hudson leans in order to learn how to engage in romantic relationships–even as a teen.

Hudson knows how to get a girl in bed, but he’s never loved one of them. As the story unfolds the POV shifts from past to present–BEFORE chapters reflect Hudson’s first summer after college began, when Hudson begins his “experiments” in love. AFTER chapters reflect his developing relationship with Alayna.

Hudson has always wanted to understand love, to understand why a person would make himself/herself weak and vulnerable to another. His parents are no good example, so Hudson sets out to prove that love is false. One of his first subjects is his childhood friend, Celia. They are both 19, and he knows that she’s harbored a crush for him for years. He has an affinity for her, much like his feelings toward Mirabelle, but that’s it. Celia claims to have found a true love at college, and Hudson, in the interest of his experiment, attempts to woo Celia from her beau, without lying about his feelings. He manipulates her, allowing her to assume he holds great affection for her, and when she dumps her boyfriend, Hudson callously refuses to have anything more to do with her. In fact, he breaks her heart entirely.

Ten years later, Hudson and Celia are friends, of a sort. They had a long history–some of which is revealed in the Fixed books–of working in tandem to upset relationships of others. Hudson’s detached, almost clinical, interest is clearly less passionate than Celia’s more sadistic pleasure. They aren’t intimate, and Hudson’s sister Mirabelle has convinced him to enter therapy for his emotional problems. He stops his experiments with Celia, much to her dismay.

When Hudson sees Alayna the first time, he is intrigued by her bright mind but senses a vulnerability, as if she had risen above some personal challenge. This is later confirmed when Celia unearths Alayna’s troubled past, her parent’s early death which lead to compulsive dating and stalking behavior. In order to draw Hudson away from his therapeutic goals, Celia makes Alayna the center of a new experiment. This game is one that Hudson decides he must play, if only to protect Alayna from Celia’s heartbreaking influence.

In short, the book gives Hudson’s side of the Fixed stories–the emotional growth he experiences is tremendous, and his rather ruthless early character is rendered likable, if not admirable–by the end. Throughout, the chess match between Celia’s machinations and Hudson’s protective influence adds a lot of tension. Having read the first three books I knew where this was going, but the ride was no less interesting. (See my rant on over-divulging reviews and why they aren’t a problem here.)

I was very much satisfied with this story, and though it features fewer smexytimes than its predecessors, it’s chock full of emotional ups-and-downs. I was cheering for Hudson, almost from the start, and glad to follow along with all the steps he took, even if some of them were sideways, to becoming the loving, compassionate man he was in the Fixed books. Really enjoyed. I honestly preferred these books to FSOG and THIS MAN because Hudson, though flawed and somewhat domineering, was more willing to compromise with Alayna. He’s a kinder, gentler billionaire tycoon. The love scenes, while graphic and intense, are straight vanilla, and still they steam.

Interested? You can find HUDSON on Goodreads, Amazon and Barnes & Noble.

NY Times & USA Today Bestselling author Laurelin Paige is a sucker for a good romance and gets giddy anytime there’s kissing, much to the embarrassment of her three daughters. Her husband doesn’t seem to complain, however. When she isn’t reading or writing sexy stories, she’s probably singing, watching Mad Men and the Walking Dead, or dreaming of Adam Levine. She is represented by Bob Diforio of D4EO Literary Agency.