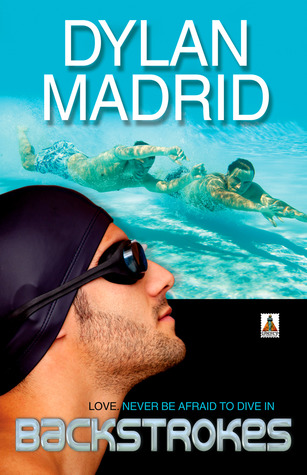 About the book:
After almost being expelled from a prestigious Chicago music conservatory for a prank gone wrong, twenty-two-year-old pianist Crawford Paul returns home to Northern California for what he predicts will be another boring summer. Concerned his scholarship is now at risk, Crawford accepts the only job he can find: accompanying a glamorous seven-year-old named Isabella to a community swimming pool for lessons. There, Crawford is befriended by a nanny named Nina, an aspiring fashion designer who finds it difficult to hide her disdain for children.

When Crawford meets Armando Leon, a lifeguard and Isabella’s swimming instructor, he accepts Armando’s offer to help him overcome his fear of water by way of private swimming lessons. As friendship turns into a summer affair, their lust for one another turns to love. When Crawford receives a chance of a lifetime audition, he is torn between returning to Chicago or staying in California to start a new life with Armando. As the end of the summer inches closer, Crawford and Armando fear they will be separated forever.

How’s about a little taste:

Crawford arrived five minutes past midnight. The temperature had dropped, a slight chill in the night air.

Armando was standing in the center of a circle of light, a white moonlike glow cast from a streetlamp outside of the pool building. He smiled when he saw Crawford and was still

smiling as they met in the ring of light.

“Then you don’t know me very well,” Crawford told him.

“What do you have planned?”

“How daring are you?” Armando asked.

“Be careful,” Crawford said. “The last time I was dared to do something I was almost expelled from school.”

Armando smiled. “Have you always been this rebellious?”

Crawford laughed a little. “I’m actually not,” he said. “Until I spray painted a wall and got caught, I’d never done anything wrong or rebellious in my life.”

“I don’t want to be a bad influence on you.”

Minutes later, they crawled through a hole in the fence near the pine trees. Except for moonlight and spill-off from streetlamps, the pool area was dark.

“You know how I’m afraid of water?” he said. “I have a similar fear of dark places.”

“I won’t let anything happen to you. I promise.”

They stood together on the edge of the pool, staring down at the deep end at their feet. To Crawford’s surprise, Armando started to undress. Within seconds, he’d stripped down to nothing but a pair of boxers.

Crawford kicked off his shoes and peeled off his socks. He wiggled his toes against the cool concrete. He slipped off his jean jacket and then his T-shirt. All that remained were his favorite pair of khaki shorts.

“What are we going to do?” Armando asked.

Crawford was confused by the question. “About what?”he asked.

“Us. The end of summer,” said Armando. “It will be here before we know it. Everything worked out for you. I know you’ll be going back to school soon.”

He could hear the hurt in Armando’s words. “That’s all we have left together?”

I’m not sure what he’s asking me. I wish I knew how to answer his question.

“I don’t know,” he said, because it was the truth.

The hope returned to Armando’s voice. “You mean you’ve thought about staying?”

“Yes,” said Crawford, thinking back for a brief moment to the conversation he’d had with his mother days before. “I just don’t know how.”

Armando reached for his hand again and squeezed it tight. “Crawford, I would never ask you to give up your dream for me,” he said. “I know how much you love music.”

Crawford took a breath before he said the words he’d been dying to say for weeks. “But I also know how much…I love you.”

The world stopped for a second. Everything was still. The branches of the trees. The chain link fence. The smooth surface of the dark pool. The air between them.

He saw tears forming in Armando’s eyes. “You just said…wow…,” he stammered. “I love you, too.”

Crawford grinned and let out a loose laugh. “Say it again,” he said.

Armando smiled and asked, “You want me to?”

“Yes, but even louder this time,” he said. “Maybe Shelley’s still in her office and she’ll hear you.”

“I don’t care if the whole world does.”

“You sure about that?”

“More certain than anything in my entire life.” Armando reached for Crawford, pulling him into his arms. Their bodies touched and the sensation of skin on skin felt electric.

My Review:
After three years of social isolation, virtuoso pianist Crawford Paul commits vandalism–goaded by his bullying peers. Now, his scholarship is forfeited, and he is facing expulsion from the prestigious conservatory where he’s been studying. Unfortunately, returning to his tiny hometown of Harmonville in Northern California for the summer only compounds Crawford’s misery.

He was meant to break out of Harmonville–that’s what his parents and mentor, Alston told him to do, anyway. So, he feels like an utter failure for returning. He wallows, a bit, until his mom gets him a job giving piano lessons. Well, sort of. Actually he’s hired as a pseudo nanny to a sassy 7 y/o swimming phenom, Isabella, who thinks Crawford is a total ‘lame-o’ for not being able to swim.

Crawford’s ‘job’ is to bring Isabella to the community pool every afternoon for free swim and team practice. It is here that Crawford reconnects with his town. And, Isabella’s coach, Armando. Armando’s a year younger than Crawford, but he’s had his eye on the pianist since junior high when Crawford had played accompaniment for his dance class recitals. Having the opportunity to captivate Crawford, for whatever time they can share is, well, huge for Armando.

Having been such a pariah all his life, Crawford’s not good at opening up, and he recognizes that he’s in Harmonville (perhaps) temporarily. Should he pursue a relationship, knowing he’ll be even more lonely with the loss?–that’s a big worry for Crawford.

Then, he looks at Isabella’s mother. She’s living with a disease that could claim her at any time–yet she lives out loud. It’s the kind of example Crawford takes to heart, and it is clear that his Summer Of Shame is soon to be the best part of his life.

This book is a tender, thoughtful redemption story, that has a dash of romance. Okay, the romance is a big part, but this is not a graphic, sweaty-grappling-bodies, F-Bomb-dropping, Big O tale. It’s a story that any reader of gay fiction could enjoy, IMHO, because the story of Crawford’s return to Harmonville is universal: the small-town community that he so detested as a kid is now the welcoming, soul-replenishing shelter that Crawford needs. He reconnects with his best friend, meets his first love, and finally SEES the loving atmosphere he had blocked out in his singular focus on his music.

It changes him. Suddenly, the most important thing isn’t leaving Harmonville, but finding a way back–permanently–without sacrificing his dreams.

I really enjoyed this book. The language is terrific, with a smooth pace and constant movement. Crawford is a responsible character. He is insightful, and calm, and has an appreciable wit. I loved how he really brought the community together for a common cause, and how he opened his heart and soul and found his love returned many times over.

Interested? You can find BACKSTROKES on Goodreads, Amazon, Barnes & Noble, and (interestingly) Wal-Mart.

About the Author:
Dylan Madrid is the bestselling author of the gay romance and suspense novels Mind Fields, Love in the Shadows, Backstrokes, and Star Dust Lullaby. A California native, Dylan grew up in the Bay Area. He opted to backpack through seven countries before heading to college and spent a year living in Europe, primarily on the Greek island of Ios. When he’s not dreaming about living on the Italian Riviera or running away to Belgium, Dylan teaches college courses in writing and the arts.

3 thoughts on “They Learned From BACKSTROKES–Review and Giveaway”