Hi there! Today I’m sharing a review for a new book in the Futon Years contemporary M/M romance series from Brent Hartinger. THE ROAD TO AMAZING is a fantastic book, and I think it can even be enjoyed with out reading the two previous books in the series, THE THING I DIDN’T KNOW I DIDN’T KNOW and BAREFOOT IN THE CITY OF BROKEN DREAMS. That said, I know I enjoyed it most because I have read those two books. Russel Middlebrook and Kevin Land are getting MARRIED! 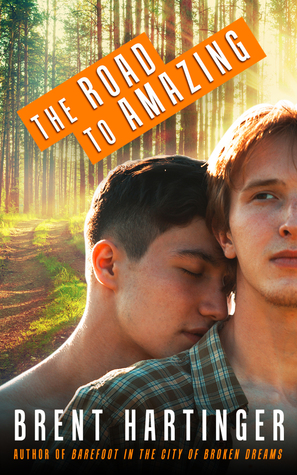 About the book:
“I think gay guys like weddings more than anyone. And it’s not because we want to destroy marriage, like some people say. It’s because we really, really want to get married!”

The wedding is taking place in a remote lodge on an island in Puget Sound. Russel and his husband-to-be have invited all their close friends to spend the whole weekend together beforehand.

And for the first time in his life, Russel is determined to not be neurotic, and not over-think things.

But that’s before things start going wrong. Who expected a dead killer whale to wash up on the beach below the inn? And what’s this about a windstorm approaching? Then there’s the problem of Russel’s anxious fiancé, who is increasingly convinced the whole thing is going to be a disaster.

Meanwhile, the wedding is taking place near the ruins of a small town, Amazing, where, a hundred years earlier, the people supposedly all disappeared overnight. Why does it feel like the secret at the end of the road to Amazing has something to do with Russel’s own future?

Can Russel’s friends Min, Gunnar, Vernie, and Otto somehow help him make it all make sense?

The Road to Amazing, the final book in the Russel Middlebrook Futon Years trilogy, is a story about endings and beginnings, and also about growing up and growing older. But mostly it’s a story about love and friendship—about how it’s not the destination that makes a life amazing, but the people you meet along the way.

Sometimes a book just sucks me in so hard that I almost cannot break away to do anything functional, like eat, or use the toilet. This book was close to that status. Russel Middlebrook’s voice is one that can take adjusting to, mostly because he’s a plain talker. He’ll speak his truth all day long, even if that truth is unreliable. And neurotic. I think I have a tiny crush on him.

Okay, enough of the fangirling. Russel and Kevin have known each other since middle school. Their on-again-off-again relationship has been documented in several books but they’ve been full-on for the past few years and are engaged to be married, and this book is all about the wedding weekend, and the zany bits that go totally wrong.

They rent a beautiful house, the Amazing Inn, on Vashon Island, Washington, and invite their closest friends: Min, Gunnar, Otto, Vernie and Nate, plus Min’s girlfriend, to arrive on Friday evening and stay for the whole weekend until the wedding ceremony on Sunday afternoon.

Kevin and Russel have been living in LA for the past couple of years and they really miss their good friends who still all live in Seattle, for the most part. This weekend is all about reconnecting, but soon it becomes calamitous. Like the forecasted storm that’s going to shove the ceremony from the epic deck overlooking the Puget Sound into the living area, or the dead orca that seems to take over the beach with its rotting stink, among other issues that nearly cause cool-headed Kevin to flip his wig.

See, Kevin has always been the grounding force in their relationship. Russel tends to get locked into his head, imagining a million worst-case scenarios, and this book flips that script. Kevin agonizes over each misadventure while Russel becomes the problem solver. And Gunnar. That certified genius expands his out-of-the-box strategy to save the day, literally, time and time again.

I felt like I was on a sun-dappled raft floating along a warm vista-filled river while reading this book. I was so engaged with Russel, and his determination to be positive and productive. His connection to all his friends, Min, Gunnar, Vernie and Otto particularly, was really special. He was in the zone, speaking to them from his heart, and learning about them and himself in the same moment. That’s the cool thing about deep friendship, being able to reveal your insecurities and know that you’ll be taken seriously. Russel had several “movie moments,” as Vernie calls them, of connection in the course of the weekend. Except, not with Kevin.

Kevin is determined to make the right show of his wedding, to prove that he’s serious about Russel, and his adult life, to all they’ve invited to assemble. Let’s remember that both Kevin and Russel are 25 years old. This is their first super-serious relationship, and they both have a sense of needing to prove themselves. Each issue that erupts to derail Kevin’s perfect wedding plans seems to also erode Kevin’s confidence and makes him a bit prickly. Russel does his best to assuage these concerns, but he’s still figuring life out, too. And his missteps make for delicious make-ups. Public (secluded) sex, anyone?

I’ll be honest, when I read the blurb for this book–after reading the actual book–I felt wistful and melancholy. I’m not ready to be done with Russel and Kevin. The Futon Years may be over, but I’m crossing my fingers for a Pacifier Years series where Russel has an unforeseen and equally dramatic change of heart and perhaps agrees to adopt some shrill and stinky youngins he cares for with his wide and deep love. A girl can dream.

Interested? You can find THE ROAD TO AMAZING on Goodreads, Amazon, Barnes & Noble, and iTunes.