Hi there! Today I’m sharing my review for Brent Hartinger’s BAREFOOT IN THE CITY OF BROKEN DREAMS, the sequel to THE THING I DIDN’T KNOW I DIDN’T KNOW and it’s really a quiet, engaging advancing love story. Russel and Kevin are two 20-something high school sweethearts who are finding their way through this kooky life. 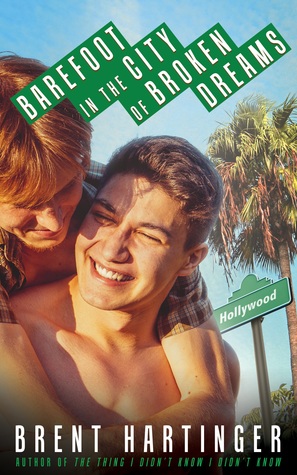 About the book:
“There was no way moving to Los Angeles was going to make me give up my soul. After all, I’d already seen all the movies about Hollywood. I knew how things worked.”

Twenty-four year-old Russel Middlebrook and his boyfriend have moved to Los Angeles so Russel can try to make it as a screenwriter. Almost right away, in a forgotten old house off of Sunset Boulevard, Russel meets Isaac Brander, a once-famous film producer who is convinced he can turn Russel’s screenplay into a movie.

Russel knows that success can’t possibly come this easy. After all, most of Russel’s Los Angeles friends are so desperate to make it that it’s downright scary. His ex-boyfriend, Otto, is trying everything to become an actor, and Daniel, the sexy neighbor, doesn’t even need a casting couch to get naked.

So what’s the catch with Mr. Brander? Could it be that movies about Hollywood don’t tell the whole truth? But what does that mean for Russel’s soul?

Barefoot in the City of Broken Dreams, a companion book to Brent Hartinger’s The Thing I Didn’t Know I Didn’t Know, is a fast-paced, funny story about the price of fame in Hollywood: the hilarious lengths people will go to achieve it, and the touching secret to survival when things don’t work out exactly as planned.

My Review:
This is the second book in the Futon Years series, and follows a longer YA series surrounding Russel Middlebrook. It is probably best enjoyed reading this series in order, but it is not essential.
4.5 stars.

Russel is 24 and dating his high school flame, Kevin, seriously. They have moved to LA so that Russel can get into the screenwriting business. He has one contact, Otto, a former summer camp boyfriend, who is an actor–struggling to get work because he has a burn scar on his otherwise beautiful face.

Russel is not prepared for the culture shock that is the LA scene. Otto schools him a bit, but Russel is dumbfounded often by his naïveté. He is offered a contract on his screenplay, Cup of Joe, and really becomes blind to a lot of issues that crop up around the pre-production meetings, and he especially takes Kevin for granted. Kevin had a stable job which he gave up for a lesser paying gig in LA, land of traffic.

Their one bedroom apartment is worn and awful, and inhabited by only a few friendly neighbors and perhaps the ghost of a dead screenwriter. Russel reaches out to Regina, a fellow screenwriter, whose girlfriend Gina is a struggling comedienne. They are good sounding boards, and become good friends, though not without problems. And Daniel, the barely 18, clearly questioning Latino boy who has no issues trying to con Russel, or Kevin, or both into some compromising situations is an interesting barometer for the heat between Kevin and Russel.

Thing is, this book moves rather quickly through several months and several large changes for Russel. He has this movie deal, or does he? He has Kevin, or does he? Otto is his friend, but does he want more? I loved the voice here, and Russel is a comfortable head case to try on now and again. He is snarky, but honest. He steps into big messes and doesn’t know how to fix them–because he is young and naïve and trying hard to figure life out without sharing to anyone how inexperienced he truly is.

I was honestly taken by surprise at the end. Russel doesn’t spend a lot of time talking about his feelings for Kevin. He’s a rather self-involved man, but not in a mean way. He’s mostly oblivious, which is where he got into trouble with the screenplay. He wants, so much, to be doing the right thing that he doesn’t always see how all the wrong things are happening. He doesn’t see Otto coming on to him. He doesn’t see Daniel playing him for a fool. Because he wants to trust that his worldview is shared by the few people he lets into his confidence, even when it isn’t.

And, he does so much better in the end that I really liked him that much more. His taking responsibility and stepping into a more adult role, both as a partner and a professional, was enjoyable–I only wished to have had more of that.

Interested? You can find BAREFOOT IN THE CITY OF BROKEN DREAMS on Goodreads, Amazon and Barnes & Noble. I received an advanced copy of this book via NetGalley.