Hi there! Today I’m sharing a Contemporary New Adult Gay romance from an author I want to know better. Brent Hartinger’s THE THING I DIDN’T KNOW I DIDN’T KNOW is a grown-up continuation of Hartinger’s YA books. GEOGRAPHY CLUB, featuring Russel, Min, Gunnar and Kevin as teens, is on my TBR right now. 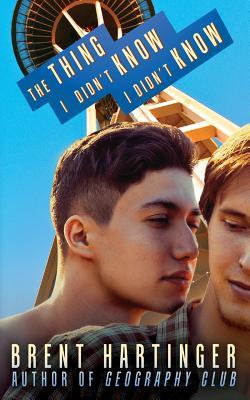 About the book:
“I guess this was what they meant by a loss of innocence. Who knew?”

Russel Middlebrook is twenty-three years old, gay, and living in trendy Seattle, but life isn’t keeping up with the hype. Most of his friends have a direction in life—either ruthlessly pursuing their careers or passionately embracing their own aimlessness. But Russel is stuck in place. All he knows is that crappy jobs, horrible dates, and pointless hook-ups just aren’t cutting it anymore.

What’s the secret? What does everyone else know that he doesn’t?

Enter Kevin, Russel’s perfect high school boyfriend. Could rekindling an old flame be the thing Russel needs to get his life back on track? Or maybe the answer lies in a new friend, an eccentric screenwriter named Vernie Rose, who seems plenty wise. Or what the hell? Maybe Russel will find some answers by joining his best friend Gunnar’s crazy search for the legendary Bigfoot!

One way or another, Russel is determined to learn the all-important secret to life, even if it’s a thing he doesn’t even know he doesn’t know.

My Review:
Russel is a 23 y/o out gay man living in Seattle. His aspirations are nil and he struggles to work two menial jobs–one as a lifeguard and one at a gimmick bakery. He lives on his BFF Gunnar’s houseboat with Gunnar and their mutual friend Min. Russel is anxious to figure out what the heck he’s supposed to do with his life, and if anyone has a clue, he’s interested to listen.

While lifeguarding one day he saves an old woman, Vernie, from drowning. Vernie is a retired screenwriter who has many regrets over her misspent life–mainly about being a lousy parent, and her interest in befriending her young savior is in part due to her guilt. She sets Russel up with a mutual friend, who turns out to be a dud, but their friendship grows.

Russel pines for direction, despite having a college degree, and he encounters his high school boyfriend–Kevin–who now works for Amazon and is in a stable relationship with a law student. Again, seeing all the people of his acquaintance with such drive and direction only depresses Russel more. And, he’s naturally drawn to Kevin, as their relationship is the only one Russel’s had that has been satisfying–one where he felt good about the person he was with, and wanted to have a great future together. Seeing Kevin and his brilliant, beautiful boyfriend together, well, Russel knows he’ll never find happiness.

But then he sees Gunnar’s obsession with Sasquatch and Min’s triangular relationship for what they are:  guesses. Distraction, even, and Russel wonders if what he didn’t know about life is that people don’t really know anything at all. That it’s all a shell game, and perhaps you make your own luck and win, or you don’t bother playing risking everything and nothing at once. He takes a risk with Kevin, and it turns out different than he’d wanted, but perhaps better than he’d hoped.

I just loved the language of this story. I haven’t read the previous books about these kids, but I was sucked in from the start with no more than a cursory backstory.

At this point, I’d like to point out that we didn’t spend all our time on Gunnar’s houseboat having stupid, irrelevant debates like this–over the Theory of Everything and Bigfoot.

I’d like to point that out, but I can’t, because we pretty much did talk about stuff like this all the time. This was what happened when you put three twentysomething dorks together in the same ridiculously small houseboat. It was like some kind of reality TV show–the lowest rated reality TV show of all time, but still.

And, when meeting a stranger for a hook-up:

There was still the actual matter of why I was meeting this guy in the first place–what came next. Even now, he was staring at me like I was a fresh plump salmon on ice at the Pike Place Market. Finally he gave me a hungry smile and pushed the door open for me.

I love it when I get bashed over the head with language that forces me to laugh.

I couldn’t help but notice that people were looking at Felicks. But why wouldn’t they? Felicks was cute. Then again maybe they were looking at both of us–I mean, I’m not exactly pigeon guts. We were two cute boys out on a date together.

Russel is a fun narrator and his plain life is all the more wondrous for his innocent guile. At first he admits to hooking up “only twice,” then it’s “three or four times” then it’s maybe seven or eight. He’s witty and snarky and hates that people are all “just get over it” about the difficulties growing up gay because NOW Middle America has decided: “Gay? It’s o-kay!” It wasn’t okay for him, and the struggles of his life have helped to forge him into someone–even if Russel can’t yet figure out who that someone actually is.

This urbane young man is pragmatic and compassionate, by turns. Sure, this guy he dated wasn’t relationship material–but that didn’t mean they couldn’t have fun, right? And, chasing down (a potentially deranged) Gunnar on a backwoods Bigfoot hunt wouldn’t seem to be the smart choice, but it was the heart-choice, the kind Russel couldn’t help making. Russel, in his quest for a purpose, had neglected to notice that the purpose-driven people he admired were, themselves, feeling as if there were floundering. As with many coming-of-age books, Russel has that existential, Talking Heads ONCE IN A LIFETIME–same as it ever was–experience, but his charm and unflinching honesty gives this theme a fresh life. I really enjoyed this story, and would love to know more about these characters. Good thing there’s more to be read!

The smexy interludes comprise a fade-to-black opus; to be clear, the sex happens behind closed doors and the Anti-Tea Party rants take place on the page. I’m inclined to recommend to readers of all ages for that fact alone.

Interested? You can find THE THING I DIDN’T KNOW I DIDN’T KNOW on Goodreads, Amazon, Barnes & Noble, and iTunes.  I received this book via NetGalley. This is my honest review.

I am Brent Hartinger, and I live to write.