Hi there! Today I’m sharing a review for a newly-released a YA M/M story from Jo Ramsey. WORK BOOTS & TEES features the redemption of a deeply troubled boy who needs forgiveness, even from himself. This is the fifth book in a series–and probably needs to be read after SHOULDER PADS AND FLANNEL, at the very least. 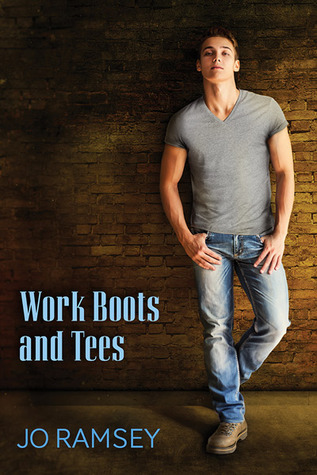 About the book:
Sixteen-year-old Jim Frankel has become the thing he loathes, and he can’t stand thinking about what he has done.

After being accused of sexual assault by two girls, Jim serves out his sentence in a juvenile detention facility. He’s shocked by the arrest for what he thought was consensual sex, and terrified his own childhood sexual abuse has twisted him into a predator—just like the man who molested him.

Upon release, Jim is no longer welcome at his family home, and with nowhere else to turn, he travels from Massachusetts to Michigan to live with his father’s cousin, Delia. Keeping his head down, Jim works hard at Delia’s art supply shop and prays no one will find out about the awful crime he committed. It’s his chance for a new beginning, but when he makes his first friend in Man-Shik Park, Jim is afraid to let him get too close. But by walling himself off from the support Manny’s offering, Jim might sabotage the opportunities in front of him.

My Review:
There are some plot points revealed in this review that COULD be considered spoilers.

At nearly 17 y/o Jim is a cast-off teen, recently out of juvenile detention for the acquaintance rape of two of his girlfriends. This is a pretty murky issue, as I will explain a bit. See, Jim is a survivor of sexual, emotional and physical abuse–from his mother’s boyfriend, father and stepfather, respectively. He has had no counseling, never told anyone about the (very young) sex abuse, and he grew up an angry angry boy–bullying all and sundry. He intimidated so many of his peers that his overbearing nature led to him into “forcing” two girls of his acquaintance into sexual acts that they later claimed were non-consensual. There was no malice in the moment, but it was clearly a very problematic scenario. The girls felt too intimidated to say “no” and it later came out that they didn’t want to–Jim was sentenced to one month of detention, is on probation until age 18 and is registered as a sex offender until age 21. If he has no repeat offenses and continues his weekly court-mandated counseling his record will be cleared. (These are the parameters of his criminal record as outlined many times by the author. In her notes, she concedes that it is likely that Jim would have not served any time based on the testimony of the girls and other reviewers contest that Jim did not commit rape. Given that I have no expertise in this area I am going with this scenario as written, and will only address my opinion of the writing, not the likelihood of the legalities…)

Jim’s mother wants nothing to do with him, his father wants nothing to do with him, and he’s been sent from his small Mass. town to live in a small Michigan town with a distant cousin of his father’s, Delia. Delia is a kind and compassionate woman, and Jim is agoraphobic, constantly afraid that someone will learn of his history and bar him from working at Delia’s art shop. He refuses to attend high school, sure that he’ll be a pariah, or someone will learn of his history. Before the rape accusations, Jim was charged with assault for beating up an out-gay boy in his school (Evan from Book 1 of this series: NAIL POLISH AND FEATHERS). He’s also extremely self-loathing. He is ashamed of his abuse, and ashamed of his actions and ashamed that he’s attracted to boys. He’s not sure if he’s attracted to boys because he was born gay, or because he was molested by a man and that somehow “turned” him. And, he’s ashamed of that, too. He wants to serve out his probation hiding in Delia’s storeroom and getting a GED and being invisible.

Unfortunately he meets a boy that doesn’t want him to be invisible. Manny is a queer boy who is not exactly out, and not exactly in–he’s Ace (asexual) but thinks he’s attracted to boys. He wants to be friends with Jim, but Jim doesn’t feel worthy to the task. In the background, Jim’s suffering panic attacks over his Facebook account which has been littered with hate, on account of all his previous issues back home. He can’t bring himself to delete the page, however, because self-loathing Jim thinks he should be eternally reminded of his mistakes, and suffer duly. Delia tries and tries to reach Jim, but can’t. Depression takes over and there’s a touch-and-go scenario that results in hospitalization.

This book series is built upon the premise of kids in tough situations making decisions that empower them. Jim doesn’t make these decisions until late in the book. He seeks help for his long-standing depression over his abuse and molestation, he does the hard work of self-examination and he begins to heal. He discusses his history in confidence and that results in further trouble–and new alliances. He finally believes Delia and starts to accept that he’s not the monster that he’s built himself up in his mind, and he begins to see that he is worthy of love, and affection. There are some truly heartbreaking revelations in the book.

While the legal issues Jim faces may not be severe enough, or too severe for others, the fact remains that Jim is a boy on a collision course with disaster before he arrives in Michigan. He is, by turns, neglected and abused and his rage is the product of this horrific upbringing. His self-hate is killing him, and it is only through being honest and getting the support and help he needs that he is able to get out of this dangerous path. Jim makes amends the best he can–by hard work, and living honestly and doing his counseling, and for some this is probably not “justice,” and for others it is simply what was necessary to keep Jim alive. The book ends in hope–as do all the others. I really appreciated the clear delineations Delia and Jim’s counselors give him. I like how he meets people who have been in positions like his, and persevered. Having known molestation survivors, I believe that there are accurate representations of an abuse survivor’s mental landscape here.

This is a hard read, because it deals with really hard topics. Jim was the bully and monster of a few books in this series, and now the audience is tasked with finding Jim a sympathetic character who should be forgiven. I don’t think this is out of the realm of possibility. I certainly found Jim redeemable, and had suspected from the earlier books that he was a closet case. That said, I’m not sure how his story will sit with younger readers. For myself, a white het woman, I have the ability to forgive much. I’m not a questioning teen who may be the subject of homophobic hate, or an adult who barely survived high school bullying–both of whom would be possible readers in this genre. So, the book is good, but it’s going to be controversial for many reasons–most particularly surrounding  the rape accusations, I believe.

Interested? You can find WORK BOOTS & TEES on Goodreads, Dreamspinner Press, Amazon and Barnes & Noble. I received a review copy of this book via NetGalley.

About the Author:
Jo Ramsey started writing when she was five years old and hasn’t stopped since. Between ages 12 and 20, she wrote twenty book-length manuscripts, longhand in spiral notebooks which now dwell in the bottom drawer of her filing cabinet. Jo’s first YA novel, Reality Shift 1: Connection, was published in January 2010, followed in October 2010 by book 2: Filtration System. Jo lives in Massachusetts with her two daughters, her husband, and two cats, one of whom occasionally tries to help her type.