Hi there, and Merry Christmas for those who celebrate! It’s the last Friday in the month, and that means I’m participating in the Armchair Squid’s blog hop. So….welcome one and all to the Cephalopod Coffeehouse, a cozy gathering of book lovers, meeting to discuss their thoughts regarding the tomes they enjoyed most over the previous month. Pull up a chair, order your cappuccino and join in the fun. Today I’m sharing a review for SHOULDER PADS AND FLANNEL, a YA coming out romance from Jo Ramsey. 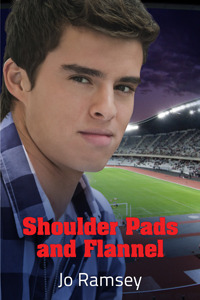 About the book:
High school football star Guillermo Garcia can count himself among the popular kids—for now. Although he secretly dates Evan Granger, who is openly gay and badly bullied for it, Guillermo doesn’t dare let his teammates, classmates, or close-knit family learn about his sexuality.

But Guillermo witnessed an attack on Evan, and now the school bullies plan to out Guillermo in retaliation. In their small town, word spreads rapidly, so Guillermo must make a quick choice—come out now on his own or risk having someone else do it for him.

My Review:
4.5 Stars for this realistic YA coming out romance. This is the second book in a series, but can be read as a standalone.

Guillermo “Moe” is a high school junior, new to his small Massachusetts town. He’s only been there six months or so, and he’s a closeted gay athlete. A football star. He is secretly dating Evan, a femme out-gay boy in his class. Evan was the MC from the first book in the series who had been assaulted (gay bashed) by two of Moe’s former teammates, Jim and Ray. They were kicked off the team for participating in a hate crime, and sentenced to probation.

Moe feels guilty for being gay. His parents are from Puerto Rico, and they have rather conservative ideas about manhood and family. They moved from NYC due to crime in their neighborhood, and Moe’s both happier and more frustrated. He likes his school more, but he laments the lack of anonymity. In this small town people notice things–like how he and Evan walk around town together. They threaten to reveal Moe’s “gayness” and tease his younger brother Ernesto. Moe fears coming out, and what that would mean for his position on the football team, with his home life and with Evan. Evan is still being threatened–now because people are mad that Jim and Ray are off their team, as well as his own femme style. It upsets Moe that he can’t really protect Evan they way he wants to–because doing so would clearly out him. But, after anonymous calls to his father at work and coded messages he starts receiving on social media indicate, it’s only a matter of time before everyone knows. Should Moe tell his family? His teammates? How “out” does he have to be?

I found this to be a refreshing look at so many aspects of teen life. There are girls who own their sexuality (“promiscuity”) and boys who own their homosexuality and bullies–physical and emotional–and kids taking things “too far” and homophobia and slut shaming and reality. Moe doesn’t always understand Evan’s need to be femme, and even wear female clothing and make up, but he loves Evan, and that means loving all of him. Evan doesn’t want to pressure Moe to come out, even though doing so would make their relationship easier–and probably get the bullies off his back.

Moe’s family is really wonderful, well, his parents are. They are thoughtful and concerned, and care deeply for their boys. His brother is a typical tween boy and has a lot of anger regarding the rumors surrounding Moe’s sexuality. There is much more to this story than coming out. There is hope and acceptance and manipulation and drama. I believe the ending is happy, for most of the parties, and it’s a positive and uplifting message. I expect this kind of situation is less-than-easy to deal with, but the narrative was sensitive and realistic at the same time.

I really like Moe and Evan. They are great kids. Their rocky start is sad, but there is certainly plenty of hope in the end. Also, this is a YA story which has no steam. Evan and Moe spend time alone together, but mostly they hang out, talk and occasionally kiss. Evan has never had a boyfriend before, and Moe wants to take everything slow because he believes, like his Catholic parents, that a sexual relationship is better saved for people who plan to spend their lifetimes together, and high school is too soon to make those kind of choices.

Speaking of Catholic parents, Moe’s parents plan a conference with their parish priest, to discuss Moe’s sexuality in confidence and determine if there will be blow back in their house of worship. Their plan is to leave and find an inclusive church if that is the case. Though we don’t find out the results of that meeting in this story, I really respected this family decision, and the comfort that it brought to Moe.

Interested? You can find SHOULDER PADS AND FLANNEL on Goodreads, Harmony Ink, Amazon and Barnes and Noble. I received a review copy of this book via NetGalley.

Thanks for popping in! Be sure to check out the review on fave books from my fellow Coffeehousers. And best wishes for a glorious holiday season! 😀