Hi there! Toady I’m sharing a review for an historical M/M mystery with a dash of romance tossed in. DARK ECONOMY by M. Keedwell is a full on 19th century sleuthing expedition, and it was rather interesting. 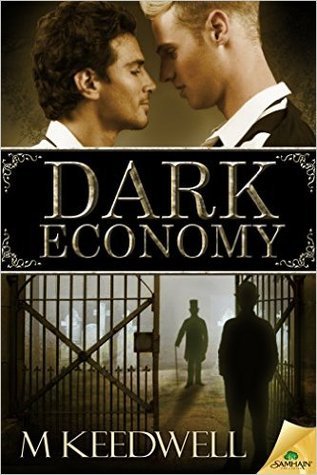 Medical student Cadell Meredith has been known to acquire “volunteers” from the occasional pauper’s grave in order to improve his surgical skills. While the legality of this practice is a bit murky, he wouldn’t go so far as to call it out and out robbery.

His latest acquisition, however, is different. The body on his table was obviously healthy, wealthy—and murdered. Cadell feels compelled to seek justice for the dead man, but while dissection comes naturally to him, crime investigation is unfamiliar territory.

Furthermore, he’s caught the attention of one of those new police officers, Blaine Breton. A handsome, sentimental fool who insists Cadell is a criminal. A criminal! Cadell is the first to admit he’s no saint, but he’s no killer.

A marvelous game of cat and mouse ensues as Cadell seeks to expose the truth while hiding his own secrets. A task that grows ever more difficult as his desire for Breton grows…and the danger deepens.

Warning: This story contains mystery, mayhem, and a male romance that starts off in the most delicious way possible—mutual hostility. Enjoy!

This is a LONG, but interesting, historical mystery with a DASH of M/M romance.

Cadell Meredith is a medical student in 19th century London. Driven to supplement his income by drawing true-to-life medical diagrams for some of his professors, he stoops to stealing fresh bodies from graves, which is how he comes across the recently murdered Robert Treswick, son of an earl and buried unnamed in a pauper’s grave. It’s also how he falls onto the radar of Constable Blaine Breton–of his majesty’s service. Seems Breton has a particular dislike of graverobbing louts, and lumps Cadell in with this criminal sort.

Cadell is drawn into discovering who murdered Treswick and that puts him into contact with Breton more than feels comfortable. The unnatural urges he’s squelched since he and a childhood friend were caught experimenting and Cadell’s father disowned him eight years ago are all inflamed in the presence of the cold and calculating Breton. In order to turn the tables in his favor, and work toward the mystery’s end, Cadell devises a plan to steal one of Breton’s constable suits and masquerade as an officer. This does move the plot along, and forces Breton to follow his quarry, Cadell, more closely.

I’m not going to belabor the talk of the plot. It’s long, and circuitous. I felt as if I was reading Alistair McLean again, at times, with all the misdirection and partial clues. I will say that I wanted there to be more of a spark between Cadell and Breton. They have a very tentative dance–how does a man approach an officer of the law with his unlawful desires, anyway! That’s one stumbling block. The other is the graverobbing. Both crimes would get Cadell swung from the gallows. That said, there are moments of quiet intimacy where a rapport and grudging regard are built. When Breton needs assistance, be it medical or menial, he calls upon Cadell. There are others involved in the morass, a friend of the late Treswick who becomes an intimate confidante, and a reconnection of Cadell with his teen love.

Throughout, however, there is this excellent discipline of Cadell’s to remain obsessively focused on deciphering the guilty party. By the end he’s uncovered three bastards, foiled a theft ring, and solved three murders–while nearly becoming a fourth. If you’re looking for a spicy romance, this is not your book. If you are looking for a complicated mystery with some M/M elements and excellent historical accuracy, this is your read. I did enjoy it, but would have loved a bunch more lovin’.

Interested? You can find DARK ECONOMY on Goodreads, Samhain Publishing, Amazon, and Barnes & Noble. I received a review copy of this book via NetGalley.