Hi there! Today I’m so excited to present a cover reveal for a new book coming from Mia Kerick. As you know, Ms. Kerick’s work focuses on LGBT teens in trouble, and I’m sure that’s to be the case in THE ART OF HERO WORSHIP, as well. Cannot wait to get my hands on this one!! 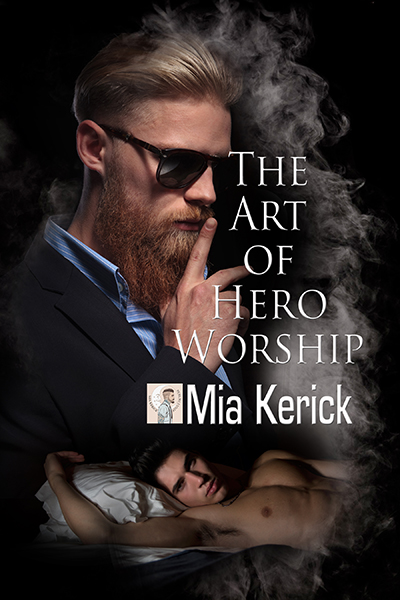 About the book:
Trembling on the floor, pressed beneath a row of seats in a dark theater, college freshman Jason Tripp listens to the terrifying sound of gunshots, as an unknown shooter moves methodically through the theater, randomly murdering men, women, and children attending a student performance of Hamlet. Junior Liam Norcross drapes his massive body on top of Jason, sheltering the younger man from the deathly hail of bullets, risking his life willingly, and maybe even eagerly.

As a result of the shared horror, an extraordinary bond forms between the two young men, which causes discomfort for family and friends, as well as for Jason and Liam, themselves. And added to the challenge of two previously “straight” men falling into a same-sex love, are the complications that arise from the abundance of secrets Liam holds with regard to a past family tragedy. The fledgling passion between the men seems bound to fade away into the darkness from which it emerged.

Jason, however, is inexplicably called to rescue his hero in return, by delving into Liam’s shady past and uncovering the mystery that compels the older man to act as the college town’s selfless savior.

The Art of Hero Worship takes the reader on a voyage from the dark and chilling chaos that accompanies a mass shooting to the thrill of an unexpected and sensual romance.

No, I’m not even remotely safe. But thankfully I play dead far better than my dog did when I taught him that trick at the age of seven.

The shots are earsplitting and getting louder because the shooter’s heading our way. I’m so fucking scared I’m trembling violently, but I promised the guy lying on top of me that I’d stay still. I concentrate on taking short shallow breaths, one after another, in my effort to stop trembling. To stay frozen—like I’ve been since I pulled Ginny to the floor and promptly let go of her hand so I could curl up into a tight fetal ball.

Somebody near me sits up, scrambles to his knees, and impulsively crawls toward the far aisle.

“Bang, bang… you’re dead.” The voice comes from directly above me; it’s blank and monotone and controlled. The weird snicker that follows is chilling. I want nothing more than to throw the big guy off my back and run like hell toward the double doors, but I just keep on going with the short breaths and stay as still as I’ve ever been in my life. Even in my terrified state, I know that the guy on top of me is totally exposed and I can’t move because I’ll cheat him out of his life, for sure. Which is so not cool when he’s trying to save mine.

I smell blood. Never noticed the smell of blood before. It reminds me of Grandma’s penny collection… if it got spilled onto the sticky floor of the theater. The scent of old copper is everywhere… like wet pennies strewn all around me on the floor.

“Dear God, help us!” This request seems to catch the shooter’s attention and he turns around and steps away from us. I curse myself for feeling as relieved, and maybe even glad, as I do.

We wait and it seems like forever. We wait as voices beg and plead and pray and he shuts them up with bullets. We wait as the sound of shots moves to the front left near the exit, where I figure he’s shooting at anyone who tries to get out through the double doors.

And then, for a second, it’s quiet.

“Now….” The big guy’s voice is whispering but it seems to blast into my left ear. “We have to make our move now.” Before I agree, the heaviness of his body lifts and I feel cold and exposed. “This is our chance to get outta here….”

His hand is attached to the back of my wrist, clutching me so hard that I know I’ll have fingerprint bruises for a week… if I live so long.

Interested? You can pre-order THE ART OF HERO WORSHIP on Amazon in advance of it’s release on Feb 14th.

Click on this Rafflecopter giveaway link for your chance to win a $15 Amazon gift card.
Good luck and keep reading my friends!

One thought on “Cover Reveal: THE ART OF HERO WORSHIP”