Hi there! Today I’m sharing my review for Heidi Cullinan’s NOWHERE RANCH. This is a super kinky, total emotional range M/M romance. I bought it for $.99 and I could not put it down. You know I’ve loved Heidi’s other works: CARRY THE OCEAN is still one of my top reads this year, and SLEIGH RIDE was a fave Christmas book. And I was not disappointed following Roe and Mr. Loving’s story. 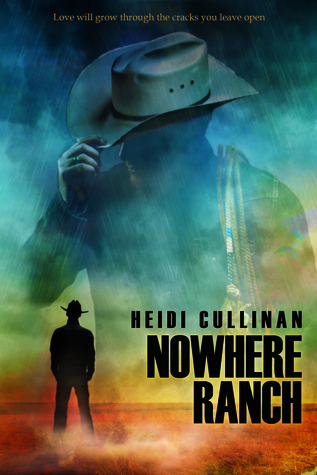 About the book:
Love will grow through the cracks you leave open.

Ranch hand Roe Davis absolutely never mixes business with pleasure—until he runs into his boss, Travis Loving, at the only gay bar within two hundred miles.

Getting involved with the ranch owner is a bad idea, but Roe’s and Travis’s bedroom kinks line up against one another like a pair of custom-cut rails. As long as they’re both clear this is sex on the side, no relationship, no interfering with the job, they could make it work.

Shut out by his family years ago, Roe survived by steadfastly refusing to settle into so much as a post office box. As his affair with Travis grows into more than just sex, Roe’s past catches up with him, threatening the thin ray of happiness he’s found, reminding him it’s well past time he went on his way.

But even a loner gets lonely, and at this point, there’s nowhere left to run. The shame and sorrow of what he’s lost will stay with Roe wherever he goes—until he’s ready to let love lead him home.

My Review:
Roe is a 25 y/o gay farmer whose family kicked him out of the house/family farm when they discovered he was gay. They wanted him to repent and “change” but he couldn’t/wouldn’t and he floundered, even getting incarcerated for a brief time. When he was released he took to ranching, working as a hand anywhere that would accept him, always on the move. Roe had dropped out of school early due to a learning disability and insensitive teaching methods. He has an incredibly low self-esteem, and doesn’t make friends. He ends up in rural Nebraska, the Nowhere Ranch, and is mortified to find the ranch owner out one night at the only gay bar within a 3 hour drive.

Travis is an older (40ish) out gay man who tried to make it as a straight man. He married, confessed, endured counseling, and divorced years ago. He’s a retired math professor running a sheep and cattle ranch because he likes the isolation. He had come out with a lover, but those days are long past. Seeing his newest ranch hand at the gay bar is a blessing in disguise, especially as Roe is compatible with Travis’ kink. Trav is a Dom and Roe loves to feel degraded sexually. The kink in this book is not the standard BDSM fare, but it is intense. I almost died when Trav asked Roe if he had a “safe word” and Roe replies “I’m partial to ‘no.’ ” (The deadpan language was just right for me.)

Roe narrates the whole book, which is written in retrospective voice, detailing how Roe found his “home;” and this home on Nowhere Ranch is truly spectacular. He is a down-to-earth guy who has few needs and fewer desires. He wants a simple life and no relationships, yet, once he and Travis dance around a bit, it becomes clear that their compatibility extends far outside the bedroom. Roe is hounded by his bad memories of home, and some contacts from his family are clearly destructive to his well-being. Trav is a compassionate man, though not outwardly. All Trav’s emotions are locked up tight, but the way he handles Roe, they way he looks after his welfare, is very sweet.

The sex is…whoa. Might be someplace on the solar flare scale. Just, yeah. Extreme at times and sweet only because it is exactly what Roe wants. The emotional landscape of this book is multi-layered, with two men who are so afraid of being hurt that they can barely acknowledge their needs. It is a relationship built almost out of convenience, if we didn’t know how incendiary their attraction really is. How their lives become intertwined was really awesome. I appreciated how Roe made solid, stable friends, how he was a significant force behind the ranch’s business, how he learned to love himself and care for himself and his future. I loved how fiercely Trav took care of Roe, and I adored Haley–Roe’s closest friend who was an amazing ally.

If this book were a food, it would have been a double chocolate lava cake; I devoured it as though it were. Yum.

Interested? You can find NOWHERE RANCH on Goodreads, Amazon, regular price on AllRomance, and Barnes & Noble.

Heidi Cullinan has always loved a good love story, provided it has a happy ending. She enjoys writing across many genres but loves above all to write happy, romantic endings for LGBT characters because there just aren’t enough of those stories out there. When Heidi isn’t writing, she enjoys cooking, reading, knitting, listening to music, and watching television with her husband and teenaged daughter. Heidi is a vocal advocate for LGBT rights and is proud to be from the first Midwestern state with full marriage equality. Find out more about Heidi, including her social networks, at www.heidicullinan.com.