Hi there! Today I’m sharing my review for the long-awaited third book in the Love Lessons series from Heidi Cullinan. I have previously reviewed the very excellent NOWHERE RANCH, CARRY THE OCEAN, and SLEIGH RIDE from Ms. Cullinan, who I should mention is a veritable Auto-Buy for me at this point. The Love Lessons series is a New Adult M/M contemporary romance series that centers around students who perform with the a cappella chorales at (fictional) Saint Timothy’s college near Minneapolis, Minnesota. In LONELY HEARTS, Baz Acher and Elijah Prince–who have been side characters in previous stories–find the kind of love the fans have surely wanted to see these broken men find. 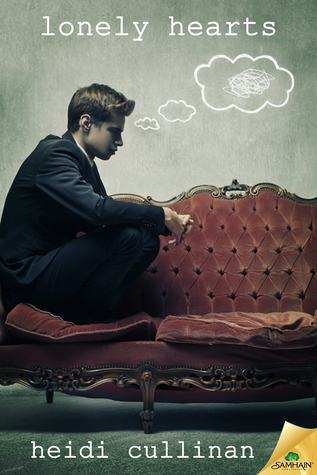 About the book:
Even hot messes need a happily ever after…

With the quiet help of his wealthy family, Sebastian “Baz” Acker has successfully kept his painful past at bay. But as the end of college draws near, his friends—his buffer zone—are preparing to move on, while his own life is at a crippling standstill.With loneliness bearing down on him, Baz hooks up—then opens up—with Elijah Prince, the guy Baz took a bullet for last year. The aftershocks of their one-night stand leave giant cracks in Baz’s carefully constructed armor. For the first time, the prospect isn’t terrifying.

Accustomed to escaping his demons by withdrawing into his imagination, Elijah isn’t used to having a happy herd of friends. He’s even less comfortable as the object of a notorious playboy’s affections. Yet all signs seem to indicate this time happiness might be within his grasp. When Baz’s mother runs for a highly sought-after public office, the media hounds drag Baz’s and Elijah’s pasts into the light. In the blinding glare, Baz and Elijah face the ultimate test: discovering if they’re stronger together…or apart.

Warning: Contains sex in a Tesla, sex in a cupboard, sex under a piano, kinky role play, and a cappella RuPaul songs. Just a couple of boys groping, battling, then finally loving their way to becoming men.

My Review:
This is the third book in the Love Lessons series and can be fully enjoyed as a standalone.

Welcome to the love story between Sebastian “Baz” Acker and Elijah Prince. Their lives have intersected in brief and dangerous ways: Baz found Elijah living on the Mineapolis streets and sent him back home, with all his cash, years before. Baz might not have if he knew the home Elijah had fled from was abusive, with parents brimming with radical ideas of how to “fix” their gay son. On campus at Saint Timothy’s, just a few months before, Elijah’s parents learned he lied about his conversion, and drove to the university to kill him–failing only because Baz jumped in front of the bullet.

Baz had been gay bashed as a teen and still deals with both the physical and emotional fallout–he has chronic pain, many titanium parts, and photophobia due to damage to his retinas. He must wear dark colored contacts and sunglasses In any kind of light, except when he’s at home and his red lamps don’t hurt. He suffers migraines and loneliness–he’s stinking rich and prime marriage bait, but Baz doesn’t want to be coddled, and he doesn’t want to feel fragile despite his many infirmities. He’s watching all his friends graduate college and feels aimless, and decides to hit on the one guy he should stay miles away from: Elijah.

Elijah’s abusive family is one thing; surviving and having a huge outreach of help is a totally different mind bender. He’s used to taking car of himself, so, even though his friends raised a ton of money for his schooling and living expenses, Elijah works menial jobs to keep his sense of self. He is a throwaway child, in his own mind, and cannot fathom what Baz Acker would want except to use him and throw him away–and Elijah is fully warned this will likely be the case. But the sense of connection from heir one night runs deep, and it’s doubly humiliating when he hears nothing from Baz for WEEKS after–especially knowing that Elijah is supposed to move into a house Baz shares with several other students.

Their meet-cute never happens, because life happens. They have old and new scars that keep them separate, and yet when Baz is on the spot to provide a date for himself to one of his mother’s political functions it to Elijah that Baz turns. Their chemistry is off the chart, but maybe it was just their chemical activity that enhanced an otherwise unspecial encounter. See, Baz and Elijah are skilled in the Pharma dabbling. Expect a lot of highly questionable self-medicating events.

The love story grows slowly, and only under Baz’s gale force front of keeping Elijah in exactly the place he needs: beside him. I absolutely adored the Miyazaki references, and how Baz and Elijah modeled themselves after Howl and Sophie, (Howl’s Moving Castle). The music references were to be expected, because Baz and many of the series characters are acapella singers for Saint Timothy’s choral ensembles. I truly appreciated how Baz dealt with his mother’s machinations, and how fiercely he loved Elijah.

As he snuggled deeper into the delicious cocoon of their bed, Elijah made himself acknowledge how hard Baz had pursued him not only tonight but also every other time Elijah had tried to withdraw. Tonight he’d found Elijah when everyone else kept walking right past him—Baz seemed to zero in, as if he’d known exactly where to look. He with the shit vision. Baz had found him, swept him away in his moving castle and talked him into sanity. Confessed that he loved Elijah, loved taking care of him. Baz wasn’t a little bit of affection. He wasn’t a flame like Aaron or Giles or Mina or Lejla. He was a goddamned lighthouse calling Elijah’s moth-eaten soul home.

This book doesn’t have as much external conflict as I expect other books in this series have had, but it’s a sucker punch of feels and a romance that any reader could applaud. Two men, broken both body and soul, finding real love.

Can I get a Hallelujah?

I really like the Pastor in this series, and his wife! They are some prime examples of God’s unfailing love. I also enjoyed many a secondary character in this story. I know most of them have their own stories, and I’ll likely check those out.

Interested? You can find LONELY HEARTS on Goodreads, Amazon, Samhain Publishing, AllRomance and Barnes & Noble. I received a review copy of this book via NetGalley.

About the Author:
Heidi Cullinan has always loved a good love story, provided it has a happy ending. She enjoys writing across many genres but loves above all to write happy, romantic endings for LGBT characters because there just aren’t enough of those stories out there. When Heidi isn’t writing, she enjoys cooking, reading, knitting, listening to music, and watching television with her husband and teenaged daughter. Heidi is a vocal advocate for LGBT rights and is proud to be from the first Midwestern state with full marriage equality. Find out more about Heidi, including her social networks, at her website, Twitter, and Facebook.