Hi there! Today, I’m featuring a review of a contemporary romance from Lily Harlem. TOY BOY is a touching story about an inadvertent cougar and the younger man with whom she falls in love. 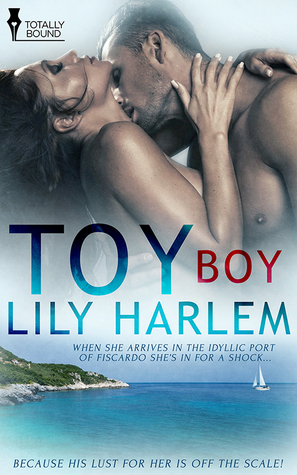 About the book:
Getting something unexpected can be a shock, but it can also be a wonderful treat, if you allow yourself to indulge, that is.

Kay is bubbling with excitement. She’s booked a sailing holiday of a lifetime in Greece with a man she’s fallen for hook, line and sinker. They met on the Internet. She’s from Oxford, he’s from Washington State. She’s a business lecturer, he runs his own successful business.

They’re perfect for each other, and she can’t wait to meet him and spend time in and out of his bed, allowing him to seduce her for real and not just with softly spoken words over the telephone.

But when she arrives in the idyllic port of Fiscardo, she’s in for a shock. There’s a reason Sullivan’s photographs were grainy, and it’s not because he’s sporting a potbelly or balding as she’d suspected. It’s because he’s over a decade younger than her and could rival any Greek god in the looks department. What’s more, his sex appeal and lust for her is off the scale.

Should Kay take what she can with her ‘toy boy’ and have some fun in the sun or hop on the first plane back to England? It’s a tricky decision for a woman who believed she couldn’t be surprised by life anymore.

My Review:
Oh! The INTERNET!!!

Kay is a 42 y/o widow who has been having an online relationship with Sullivan, a man she thinks is her perfect match. They are both successful people–she’s a business management prof at Oxford, and he owns his own company in Washington State. They have spent countless hours online and on the phone revealing their hearts and souls to each other, and Sullivan has finally convinced Kay to meet him in person, in Greece, for a week-long holiday on a sailboat. Just the two of them.

She is beyond excited to share air with this man who has her fragile heart in his palm. But, the Internet strikes!

See, Kay has only seen Sullivan’s picture once in all the months they have chatted, and it was not the best pic. It was grainy and Sullivan was all covered in his winter garb. She’s a bit nervous that he might not be representing himself honestly, but she’s in love with the MAN, not his face, right? He could be balding under that winter beanie, or hiding a paunch under his navy parka, but that’s okay because he is her soulmate.

She’s so shattered when he steps off the boat to greet her. No! NONONONONO! How? Who?

Devastated by his shell game, Kay wants to return to Oxford, with haste, but she’s in Greece and has no immediate resources–again the Internet FAILS her, with no service in this remote port and the travel agencies having closed for the evening. With nowhere to stay Sullivan, who’s pretty broken over Kay’s complete refusal to entertain any discourse regarding his age and her uninvited cougar status, convinces Kay to sleep in the boat’s cabin for the night. And then, he sets sail at daybreak effectively shanghai-ing her back into her planned vacation.

I ABSOLUTELY LOVED THIS.

I had a lot of trepidation over Sullivan’s shadiness, but his desperation to win Kay over was as forthright as it comes. He never expected she’d be so put off by his age, and he craves her wisdom and steadfastness–she’s a well-settled woman who doesn’t need his money and isn’t looking for a meal ticket. She’s smart and they have fascinating conversations. Sullivan is convinced they will be happy together, if only Kay will give him he opportunity to prove it.

I was so glad she did. The emotional back-and-forth Kay puts herself through is pretty enlightening, and speaks volumes about society’s mores regarding partnerships where a large (in this case 14 years) age difference exists, and the double-standard of that regarding older women. Truth is, I was enchanted by Sullivan, and it took Kay less than 24 hours to recognize that, truly, she fell in love with the man–not his age. The HEA is spectacular, and the sexytimes are as delish as the descriptions of beautiful Greece and its delectable cuisine. Yum.