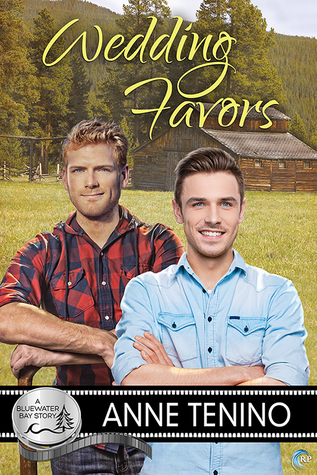 Lucas Wilder’s best friend is a traitor. First, Audrey moved back to their hick-infested hometown, Bluewater Bay, and now she’s marrying a local. His own brother, in fact. And as her Man of Honor, Lucas gets coerced into returning for an extended stay. Although, between his unfaithful ex-boyfriend and his artist’s block, going home isn’t the worst thing that could happen. Even if the Best Man is Gabriel Savage, Lucas’s first crush, first hookup, and first heartbreak.

The only reason Gabe hasn’t been waiting for Lucas to return to Bluewater Bay is because he never thought it’d happen. Not that it matters now that Lucas is back—Gabe’s still a logger who’s never been anywhere (Canada doesn’t count), and Lucas is now a famous sculptor who’s been everywhere twice. Plus, there’s that shared past.

When Audrey asks Lucas to make her wedding favors, the only place to set up a kiln is at Gabe’s tree farm. Soon, they pick up where they left off twelve years before, then blow past it, discovering why neither of them forgot the other. Now they have to choose how much of their history they’ll repeat, and what future they’ll make together.

4.5 stars for this reconnection M/M romance. This is part of the larger Bluewater Bay series, but can be read as a standalone.

Lucas has just finished moving his belongings out from the home/studio he shared with his long-time boyfriend in LA when his BFF, Audrey, calls from Bluewater Bay to tell him not only is she getting married in 6 weeks, but also that she’s marrying his brother, Zach. Lucas is not ecstatic–he loves Audrey, but he hates their hometown, and doesn’t want to return for the nuptials. And he’s especially frustrated to learn that Audrey wants him to be her Man of Honor…so his brother’s Best Man is none other that Gabe Savage, the boy who broke him 12 years ago.

Gabe Savage has carried a torch for Lucas Wilder ever since high school. He loved him, secretly, but never owned it because he knew even then that Lucas was meant for the big wide world–he was a promising artist in school and had been accepted to college states away. Meanwhile, Gabe knew the only place he’d ever live was on his 5th generation family tree farm. Gabe took one forbidden taste of Lucas back then, and learning that Lucas is coming home for the wedding kindles a hope for…more.

Lucas, unfortunately doesn’t harbor any warm, fuzzy feelings for Gabe. He sees, instead, the person who touched him once–he thinks for sport. Gabe wasn’t particularly adept at expressing himself (this hasn’t changed) and made it clear all those years ago that Gabe and Lucas was just a “one off” leaving Lucas feeling foolish and used, and more than eager to flee Bluewater Bay. Gabe was afraid Lucas would stay for him, back then, and it would ruin Lucas’ chances, but he never intended to hurt Lucas for real. Now that they see each other at all the wedding-related events Gabe has a chance to explain; Lucas isn’t thrilled, but he does admit that he may have let that sour memory sit too long.

Working on sculptures for Audrey’s wedding favors requires Lucas to spend time out at Gabe’s farm–where the is plenty of wood, space and, yes, horse manure to power Lucas’ kiln. He’s also inspired by Gabe, who is ever-present and ever-helpful. I really loved how they worked hard to talk this time around. Sturdy Gabe is a taskmaster, which is very much appreciated by Lucas–who has a bit of a humiliation kink. Their romance is really excellent. They have a true affection growing, and are bashful of the repercussions: Lucas is only supposed to stay until the wedding, but he’d consider staying longer if Gabe asked. Gabe wants, with his whole heart, for Lucas to stay, but he’d never ask–he won’t clip Lucas’ wings. On the flipside, the podunk town Lucas hated is better seen with his older, more experienced eyes. Bluewater Bay has developed some in all the years and it’s not long before Lucas imagines himself staying…or at least settling not far away and visiting Gabe….often.

The whole second half is a delicious ramp up to an HEA ending that has all the right feels. There’s a little bit of domination, but it’s never the focus of the lovemaking. Lucas is kinda endearingly odd, as a person, falling into artistic fugues and getting consumed by his vision for hours on end, but his genuine appreciation of Gabe as a man–from the heady rush of body hair, to loving his body scents and firm musculature, was something I could really appreciate. 😉

Gabe was so loving and tender, having the deepest affection and yet being willing to sacrifice it for Lucas’ best interest. I could have smooched him longtime.

There’s a little bit of angst, but it’s downplayed. This book is a smooth ride and a feel-good for any type of day.

Interested? You can find WEDDING FAVORS on Goodreads, Riptide Books, Amazon, Barnes & Noble and AllRomance. I received a review copy courtesy of NetGalley.

Raised on a steady media diet of Monty Python, classical music and the visual arts, Anne Tenino rocked the mental health world when she was the first patient diagnosed with Compulsive Romantic Disorder. Since that day, with her trusty psychiatrist by her side, Anne has taken on conquering the M/M world through therapeutic writing. Finding out who those guys having sex in her head are and what to do with them has been extremely liberating.

Anne’s husband finds it liberating as well, although in a somewhat different way. He has accepted her need for “research”, and looks forward to the benefits said research affords him. He thinks it’s kind of cool she manages to write, as well. Her two daughters are mildly confused by Anne’s need to twist Ken dolls into odd positions. They were raised to be open-minded children, however, and other than occasionally stealing Ken1’s strap-on, they let Mom do her thing without interference.

Wondering what Anne does in her spare time? Mostly she lies on the couch, eats bonbons and shirks housework.

4 thoughts on “Creating Love With The WEDDING FAVORS–A Review”