Hi there! Today I’m sharing a review for a newly published episode in the Bluewater Bay series. RAIN SHADOW by LA Witt is an adult, M/M contemporary romance that features mature men finding love even if they don’t want to… I’ve enjoyed many books in this series, including LONE WOLF and WEDDING FAVORS. While all the books take place in the Bluewater Bay universe, they are all able to be enjoyed as standalones. 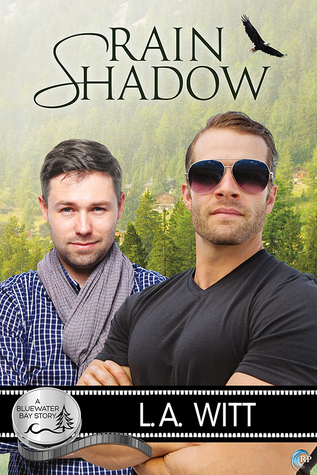 About the book:
Jeremy Rose came to Bluewater Bay to work as Anna Maxwell’s bodyguard, not to escape his increasingly bitter relationship with his estranged kids. He just wants to focus on his job and be alone for a while. He’s done with love, especially now that three years after his long overdue divorce, he’s got a front-row seat to the rapid deterioration between Anna and her girlfriend. Cynical doesn’t even begin to describe him.

Except Jeremy refuses to seek counseling for his broken family, and Scott refuses to get seriously involved with men who work dangerous jobs. They both need to realize they can only hide for so long from the pain they came here to escape. They must face their pasts before they lose their shot at a happy future.

This is part of the Bluewater Bay series, but can be fully enjoyed as a standalone.

Jeremy is a 40ish man who recently
1. Came out of the closet
2. Divorced his wife of 15+ years
3. Moved to Bluewater Bay to give his family space, and work as a private security detail to the Wolf’s Landing film crew.

In particular, Jeremy is the main protector for one of the show’s director/producers: Anna. Anna and her live-in girlfriend Leigh have a rocky relationship, and are in counseling which is hard for Jeremy to experience. He spent years in couples therapy after coming out, trying to make the marriage work “for the kids’ sake”

News flash: It didn’t work, and Jeremy’s convinced that counseling is a waste of time and money. He want’s nothing to do with relationships now, or ever, partly because his kids are having SERIOUS problems with dad being gay.

He meets silver fox Scott while he escorts Anna and Leigh on one of their “togetherness outings”. Jeremy senses an attraction, but fails to get Scott’s contact info. Imagine his frustration to learn that Scott is a marriage and family counselor at the same clinic where Anna and Leigh seek advice. Scott’s tentative with Jeremy when he learns he’s in security–Scott’s one and only love was a cop killed in the line of duty.

These mature men embark on a no-strings sexual extravaganza, all the while sliding headfirst into Relationshipville. Neither wants to admit it, and neither wants to let it go, but the animosity that each feels for the other’s job is problematic. Scott wants to counsel Jeremy on his family troubles, and Jeremy wants to assure Scott he’s safe in his security duties.

They have struggles. Part of this is not having a healthy communication. Also, Jeremy’s daughter, particularly, doesn’t help. She’s a serious brat. Unfortunately, remembering my own kids in their teens brings back nightmares of that combativeness, so she’s got some authenticity in my read. I think Jeremy and his ex gave her too much power, however. Jeremy seems bent on weaving himself a hairshirt to wear regarding his late coming out, and being a closeted gay man married to a woman. And Scott is not as understanding as I’d like, for a counselor. For mature men, they make some juvenile decisions. Scott’s ultimatum to Jeremy: counseling or else, was completely uncalled-for and jarring due to poor foreshadowing.

That said, there’s lots to be enjoyed in the sexytimes. I love mature men finding love, and this book has that, as well. I admired the amiable relationship between Jeremy and his ex; that was pleasant. The book ends a little shy of an HEA, but it’s implied. So…HFN, hot men, and thoughtful partners, for the most part.

Interested? You can find RAN SHADOW on Goodreads, Riptide Books, Amazon, Barnes & Noble and AllRomance. I received a review copy of this book via NetGalley.

About the Author:
L.A. Witt is an abnormal M/M romance writer who, after three years in Okinawa, Japan, has recently relocated to Omaha, Nebraska, with her husband, two cats, and a three-headed clairvoyant parakeet named Fred. There is some speculation that this move was not actually because of her husband’s military orders, but to help L. A. close in on her arch nemesis, erotica author Lauren Gallagher, who has also recently transferred to Omaha. So, don’t anyone tell Lauren. She’s not getting away this time…

5 thoughts on “Hidden in the RAIN SHADOW–A Review”