Hi there! Today I’m sharing my review for Lucy Felthouse’s NATIVE TONGUE. This is a contemporary M/M military romance novella which is the sequel to DESERT HEAT, and features British officer Hugh Wilkes and his first committed lover, linguist and medical student, Rustam Balkhi. Don’t forget to drop down below and enter the giveaway! 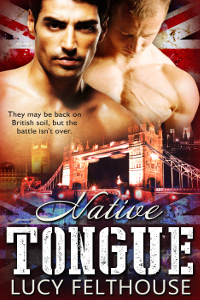 About the book:
They may be back on British soil, but the battle isn’t over.

When Captain Hugh Wilkes fell for his Afghan interpreter, Rustam Balkhi, he always knew things would never be easy. After months of complete secrecy, their return to England should have spelt an end to the sneaking around and the insane risks. But it seems there are many obstacles for them to overcome before they can truly be happy together. Can they get past those obstacles, or is this one battle too many for their fledgling relationship?

Thank you so much for having me here today. I’m delighted to share an excerpt from Native Tongue which shows the boys, Hugh and Rustam, out in Soho, the gay-friendly area in London. They’re still trying to settle into their relationship and get used to not having to hide who they are. They’ve also bumped into a couple of out-and-proud gay gays who are intrigued by their story. I hope you enjoy the snippet, and be sure to scroll down and enter the giveaway, then check out the rest of the stops on my blog tour.

Many thanks to Lucy! So, how about a little taste?

Lots of handshaking between the four men ensued as they were all introduced.

“So,” Jared said, glancing between Wilkes and Balkhi, “would it be okay if we joined you?”

Wilkes turned to Balkhi. “Are you okay with this?”

Balkhi seemed a little taken aback by the whole situation, but there was warmth in his eyes. “Yes, of course. I suspect Jared and Paul will be able to give us some… insider information that we might find useful.”

“Excellent!” Jared clapped his hands, then reached for Paul’s hand once more. “Okay, let’s go. I’m looking forward to this.”

With that, Jared and Paul turned around and began walking down the street.

Wilkes looked at Balkhi, shook his head, and shrugged. “I’ve no idea what just happened there, but it looks as though we’re in for an interesting evening.”

Balkhi smiled, and as they fell into step behind the other couple, he leaned in close to Wilkes and said, “Yes, I think we are. And the best part is I get to take you home afterwards.”

The true intent of his words was unmistakeable. Wilkes’ heart missed a beat. Warmth flooded his face, then the blood started to flow somewhere much lower down. He managed to engage his brain enough to reply, “Carry on saying things like that and we won’t even make it to the bloody restaurant.”

Chuckling, Balkhi reached out and took Wilkes’ hand again. “Yes, we will. We have made it this far, and we are doing well. Let’s see this through. Spending the evening with other gay men will be good for us. We will be able to see how it is done.”

“I don’t think it’s as simple as that, Rustam. We can’t just copy everything they do.”

“I know. I simply mean that being in their company may relax us, remind us that it is perfectly normal, and perfectly okay, for two men to be affectionate towards each other in public. I am not proposing we start kissing in front of an audience, or fucking on the restaurant table. I am just saying we may learn something from them. Or we may not. But they seem like nice people, so it cannot hurt to find out, can it?”

“Now you’re the one who’s absolutely right. Though I’m glad you don’t want to kiss or fuck in public.”

“Because,” he growled, pulling Balkhi closer and speaking quietly into his ear, “I don’t want to share you with anyone else, that’s why.”

A small smile crept over Balkhi’s lips. “And I do not want to be shared. We may not have any idea what we are doing here, but make no mistake, Hugh. I am yours, and yours alone.”

Wilkes felt an urge to lean over and give Balkhi a quick kiss, but his bravery didn’t stretch quite that far. Not yet. They were still holding hands, which was a great start, but perhaps it would be better to get used to that before doing anything else.

Internally, he shook his head. Why the hell was this so hard for them? Why couldn’t they just throw caution to the wind and show affection however they wanted?

Because, he reminded himself sternly, they couldn’t break long-standing habits in the blink of an eye. They’d get there, he was sure of it. It would take time, but they’d get there.

Realising he hadn’t replied to Balkhi, he squeezed his hand. “And I am yours, Rustam. For as long as you’ll have me.” 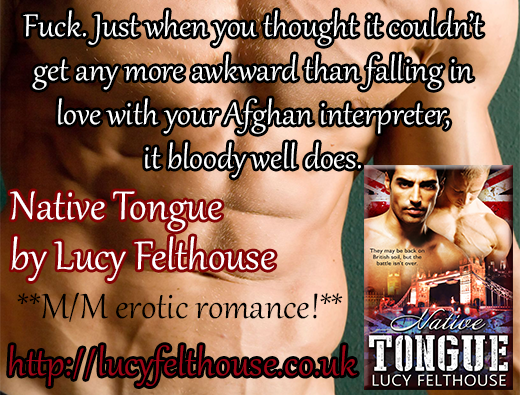 My Review:
This is the second book in a series; it is best read in sequence.
4.5 stars for this happy sequel.

Hugh Wilkes is home for Afghanistan and looking forward to reconnecting with his lover/translator Rustam Balkhi–an Afghan native who has returned to London to continue his medical schooling. These two had an illicit relationship while stationed together at a British base camp, but, in England, they have the opportunity to be out and proud with each other.

Over the course of a few weeks, they meet on weekends and practice being out together in public. It is a big adjustment to come out of the closet. They have lots of sexytimes and some small misadventures, but they tackle them together–not least of which is Hugh coming out to his family.

There is some mild angst, but the book is short and the pace is brisk. The bulk of the book is highly positive, with a story centered on two men building a positive, loving relationship. It is sweet and tender, with a good dash of heat.

Interested? You can find NATIVE TONGUE on Goodreads and Amazon (UK, US, AU, CA and DE), All Romance eBooks, Barnes & Noble, iBooks UK, iBooks US, and Kobo, and Smashwords.

For those of you that haven’t yet read Desert Heat (which is recommended before picking up this book), there’s a great value two book bundle available exclusively on Amazon, and is FREE to Kindle Unlimited members.

Click on the Rafflecopter link below for your chance to win an Amazon gift card.  Make sure to follow the whole tour—the more posts you visit throughout, the more chances you’ll get to enter the giveaway.
a Rafflecopter giveaway