I had the great pleasure to get a copy of the YA dystopian anthology WHAT TOMORROW MAY BRING. It’s a 11 full-length novels for a tidy little price. One of my fave authors, Susan Kaye Quinn, has a book in there–OPEN MINDS–which is a super fantastic read as I have noted.

One of the first novels I devoured when I cracked the “spine” on WTMB was daynight. This dystopian YA romance caught my eye for the sheer fact of its handling of sex. In daynight, the kids are supposed to get ‘cleaved’ or married by their 18th b-day. This is a non-revokable marriage and occurs on an alternate Earth called Thera. My mom-o-meter was piqued, so I took the plunge. 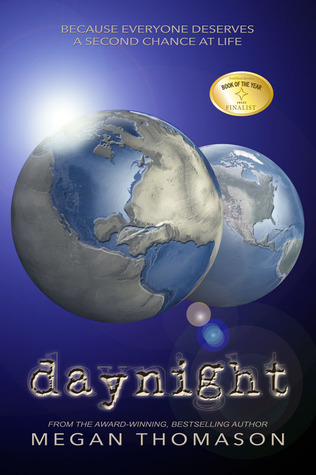 Meet Kira Donovan. Fiercely loyal, overly optimistic, and ensnared by the promise of a full-ride college scholarship, Kira signs the SCI Recruit contract to escape memories of a tragedy that left her boyfriend and friends dead.

Meet Blake Sundry. Bitter about being raised in Exile and his mother’s death, Blake’s been trained to infiltrate and destroy the SCI. Current barrier to success? His Recruit partner—Miss Goody Two Shoes Kira Donovan.

My Review:
Kira has had a whole lotta change in a short period of time. Her parents were unwilling to pay her college tuition, so Kira tested into the Second Chance Institute program–it works like this: Kira spends her senior year of high school working for them, then they pay her college tuition. She’s nervous about the ‘SCI year’ coming between herself and her friends, including her boyfriend, Tristan, but that fear dissolves when all her pals are blown up in a huge explosion at an unsupervised house party.

True, Kira had just broken things off with Tristan for being a cheater, but she’s still shell-shocked. Plagued by nightmares of the explosion she barely survived, and dreams of a stranger she had only just met–Ethan–Kira suffers depression that she hopes will fade with distance–she enters SCI. Turns out, her new locale is an alternate Earth, called Thera.

Thera is hot. 95 degrees, at night–upwards of 150 in the blazing sun. Thera is a mirror-image of Earth, with all land masses and water bodies swapped, so all the parts of Earth that are water–oceans, lakes, streams–are land, and water only exists where the land was on Earth. This makes water an even more precious commodity on Thera.

Also, the majority of the population on Thera are Second Chancers–people who died on Earth and are “reincarnated” on Thera. They are only young, able-bodied folks–capable of carrying the lab-created embryos to term, because Second Chancers are otherwise infertile. Kira’s job is to help assimilate the Second Chancers, because they come through the transition from Earth to Thera via death their bodies are intact and their memories are clean slate–so they sometimes struggle–this is what Kira is TOLD, anyway. Imagine her horror when the Second Chancers she’s to monitor and assimilate happen to be the kids whose deaths she just mourned for MONTHS–including Tristan.

In this effort, Kira is partnered with Blake, an attractive, secretive fellow student from Earth. It soon becomes clear that the SCI isn’t actually planning to let Kira, or Blake, leave when their year is up. Part of the rules on Thera dictate that all Therans must ‘cleave’ (marry) by age 18. This is a lifetime binding, and dissolution or straying from one’s cleave will result in severe punishment–exile or death. And exile is almost certain death.

Blake knows this well–he’s a Theran mole who grew up in exile and escaped to Earth years ago. His father is part of the Exiler Resistance, and expects Blake to assist with a huge operation to take down the Theran government. Oh, and Blake and Kira share a house. The Therans are determined to maneuver Kira and Blake into a cleaved pair–trapping them on Thera forever. See, Kira and Blake have opposing genetic backgrounds–Kira is a Pure Light, while Blake is a Pure Dark; the union of these genes in their children would create half-breeds who could easily traverse the span between Earth and Thera. Such people are known as daynighters and they are highly prized on Thera as communicators.

I guess they hadn’t banked on Kira’s ability to deflect the advances of boys. She never even gave it up to Tristan, and they dated for a year….

Also, Ethan is waiting. He hadn’t perished in the explosion as Kira believed. No, he’s a Theran. And also a Pure Dark. He’d be the perfect genetic match to father Kira’s children–with one glaring exception: he had been born with a heart defect. The Therans are afraid to risk his progeny being likewise impaired. But Etahn’s the son of two very powerful leaders on Thera–and they have BIG plans for Ethan, plans that include him having a lot of influence on Earth politics. These plans don’t interest Ethan, however; having met Kira, he pines for the opportunity to cleave her.

As the story unwinds we learn that the explosion on Earth wasn’t accidental, that the Therans are taking no chances that Kira’s babies won’t be born (even if she won’t cleave) and the autocratic powers that be on Thera have absolutely zero problems with killing any and every person who stands in their way.

The three viewpoints: Kira, Blake and Ethan, tell a tale of Thera that is very different, and totally engrossing. Plus, the sexual tension is as high as the day temps on Thera. I adored the creativity that built this world. The transition to a nocturnal society was fascinating. And, the pureness of purpose these three have is truly remarkable. Blake knows he’s under scrutiny, and has the chance to cleave Kira in order to protect himself, but he can’t divert from his mission, or else the people who raised him will continue to suffer in Exile. Ethan knows he’s a pawn to his family’s ambition, but he seeks to find his own happiness within his circumscribed world. And Kira, she recognizes the danger in rebellion and submits to Theran rule in order to protect the few she can–for now. There’s a lot of maturity, and selflessness to be had throughout. It’s rather fun to have three heroes to cheer on.

The love triangle, as manufactured as it is by the Therans, is really quite fascinating. It’s not simply attraction, there’s dire consequences on either side of the choice to cleave–and some of the Second Chancers play a big role in keeping the sexual tension high. While it’s clear that Kira would be a good match for either Ethan or Blake, the reader will be hoping that Kira doesn’t cleave ANYONE, which is a unique twist on a romance theme. For all the talk of sex and cleaving, the book is pretty innocent. Appropriate to YA readers and above.

Interested? You can find daynight on Goodreads, Amazon and Barnes & Noble. daynight has a sequel, arbitrate, and a freebie companion story. Expect reviews of these since they kept me up too late last week…. 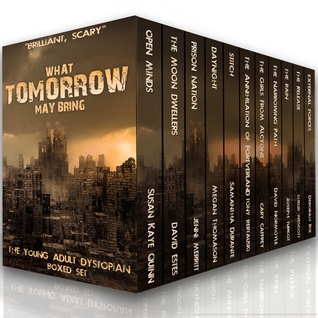 It is also one of the 11 books in the WHAT TOMORROW MAY BRING collection. It’s actually the same price as daynight, on it’s own. So for $2.99 you’d get this book and ten others. That’s an amazing buy. Click here for the link to pick up WTMB. I’m getting ready to dive into some more stories from that, so I’ll be reporting back if any others amaze.

Bestselling, award-winning author Megan Thomason lives in paradise aka San Diego, CA with her husband and five children. A former software manager, Megan vastly prefers writing twisted tales to business, product, and marketing plans. When she isn’t typing away on her laptop, she’s reading books on her phone–over 600 in the last year–or attending to the needs of her family. Megan’s fluent in sarcasm, could potentially benefit from a 12-step program for road rage, struggles with a Hot Tamales addiction, loves world travel & fast cars and hates paperwork & being an insomniac.

One thought on “daynight? Mind = Blown (A Review)”