Welcome one and all to the Cephalopod Coffeehouse, a cozy gathering of book lovers, meeting to discuss their thoughts regarding the tomes they enjoyed most over the previous month.  Pull up a chair, order your cappuccino and join in the fun.

This month I want to share a great book I’ve loved for a bit, but revisited recently. It’s a dystopian YA, near-futuristic novel where everyone reads minds. Well, everyone except for Kira. 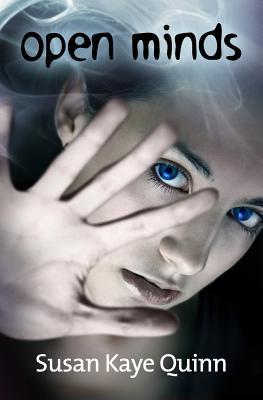 In this world, all the drugs and chemicals that leeched into the water systems caused changes in neural development allowing for pubertal-onset telepathy. Years ago the first telepaths, called Readers, were ostracized, but now it’s so commonplace that big cities have been largely abandoned and houses must sit at a minimum distance so the neighbors can’t overhear what’s happening next door. At sixteen, Kira’s passed the point where she would transition into a Reader. Considered a Zero, Kira’s in the minority and destined for the menial jobs assigned to those with closed minds. Not the future she envisioned. And it troubles her would-be boyfriend Raf, as well.

But Kira soon learns that she isn’t a Zero after all. While her mind isn’t open, she has a different ability–the ability to “jack” into others’ minds and cause them to obey her commands. One can imagine the incredible potential of her power. In fact, one does, and he’s a gangster.

See, there are a fair amount of Jackers out there–hidden in plain sight–and they are being sought by two contingents: the Mafia, and the Government. While trying to save Raf from certain death, Kira blows her Jacker cover and is rounded up into an internment camp where government scientists study the “jacker problem”.  Much like the internment camps of World War II, Kira and her fellow refugees have no rights, no help, and no recourse against the potentially fatal ‘treatments’ they endure.

In order to survive, Kira must team with adversaries who would just as soon kill her. Good thing she’s a Super-Jacker, and her skills may be strong enough to free them all. But, even if she does escape where can she go? Her family will undoubtedly become targets. And, the agents running the camp will surely track her down. The resolution is a pell-mell race for Kira to save not only herself, but young Jackers in the government testing labs.

Kira is a strong MC, and her steadfast commitment to doing the right thing, even if it’s hard, gives readers a protag worthy of respect. It’s a super-fast read that tackles real societal problems with grace and confidence. I read this book in a day. Mostly because I couldn’t stop until I knew Kira was safe.

The great thing? OPEN MINDS is a FREE eBook on Amazon and Barnes & Noble. OPEN MINDS is the first in a trilogy, but has a satisfactory ending that resolves completely while leaving some room for the companion books.

Thanks for popping by! Please click the links below to catch up with my fellow Coffeehousers. And, as always, keep reading my friends!