Hi there! Today I’m sharing a review for a contemporary M/M romance from Brad Vance. WOULD I LIE TO YOU is the first in a cybercrime series that features a software billionaire and an ex-com hacker in a battle against the Good Ol’ Boys of the Grand Old Party. 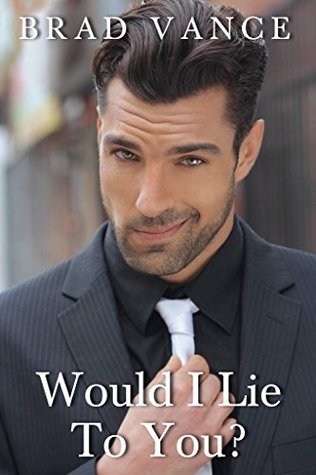 About the book:
Software billionaire Marc Julian’s orderly life is shattered one night by a cyber-intrusion into his company’s servers. He’s always surrounded himself with the best people, but finding the culprit behind this might require a real expert…and sometimes it takes a thief to catch a thief.

Jesse Winchester and his team of “grey hat” hackers are suddenly available to Marc. Marc doesn’t know if he should trust Jesse with the keys to his company’s kingdom. After all, Jesse’s a convicted felon, sent to prison for violating the Computer Fraud and Abuse Act. A felon sentenced to thirty-five years in prison, who mysteriously served only three years before being released.

Marc’s first company, his whole life, was shattered because he trusted the wrong person. This time there’s even more at stake, but few other options. Especially when his evil enemies, the billionaire industrialist Krom brothers, are revealed to be the source of the intrusion.

Is Jesse there to help Marc, or does he have his own history with the Kroms, his own score to settle? As Jesse and Marc spend more time together, their growing intimacy is at war with their need to win their respective battles. Soon the game they start to play with each other, against each other, becomes more exciting, more exquisitely frustrating…and more dangerous.

My Review:
Marc Julian’s been burned before. A bipolar software programming savant, Marc’s first company was bankrupted when his partner walked off with the venture capitalist’s money. He never forgave Walt, who used and abused him, but Marc grew up a lot in the process of rebuilding his fortunes. Now CEO of Imperat, he uses his genius to devise programs that assist mankind. He has a new empathy for people and has developed steady relationships, though he never dates. He has a bond with a discreet escort who provides the kind of rough play and domination that Marc craves for release. And Marc certainly needs release when he learns his newest project has been hacked and stolen.

This brings ex-con master con artist/hacker Jesse Winchester into Marc’s life, and oh it’s a mixed bag, that. Marc doesn’t want to lust after Jesse, and Jesse doesn’t want to be attracted to Marc, but thems the breaks. They’re able to be mostly professional, and determine the source of the hack: the Kroms, wealthy, Republican, untouchable…also the reason Jesse spent three years (of a 35 year sentence) in prison.

The book is mainly centered on the hack-back of the Kroms database, and the revelations of the dirty deeds these unsavory old bastards perpetrate on the unwitting populace. Think: Treason. But, as with many books from this author, there are extended flashback chapters that reveal the backstory for both Marc and Jesse. Neither Marc nor Jesse can bear to trust another man with his heart, or his history. Can he? They’ve each been violated, but the key to beating the Krom’s rests on their complete honesty, and that might be a step to far for either man. Well…maybe. I will say the story ends with a bang, and I don’t only mean the explosion that nearly kills Marc and Jesse. No, it ends with a manhunt and an Andorran escape plan.

I really liked the tech elements, and the thriller aspect. I love how Jesse and Marc interact, and how the whole “Hollywood Hacker” mystique is humorous to them. As with all the work I’ve read by Vance, the pace tears along and the sexytimes are minimal. There is a romance brewing, but it’s not the focus, and won’t be. Revenge is the objective and the connection that builds between Marc and Jesse is an intriguing and delicious slow burn. This story ends well, with a Happy For Now vibe, and there’s a sequel that puts Marc and Jesse into connection again, against foes which remain.

I think people who enjoy some light M/M domination elements, tech thrillers and cyber crime plots will find this book to be a knockout. I enjoyed it, and only wished for a bit more sexytimes for Marc and Jesse before I turned the final page.

Interested? You can find WOULD I LIE TO YOU on Goodreads and on $.99 sale over at Amazon.

About the author:
Brad Vance writes gay romance, erotica and paranormal stories and novels, including the breakout hits “A Little Too Broken” and “Given the Circumstances.”