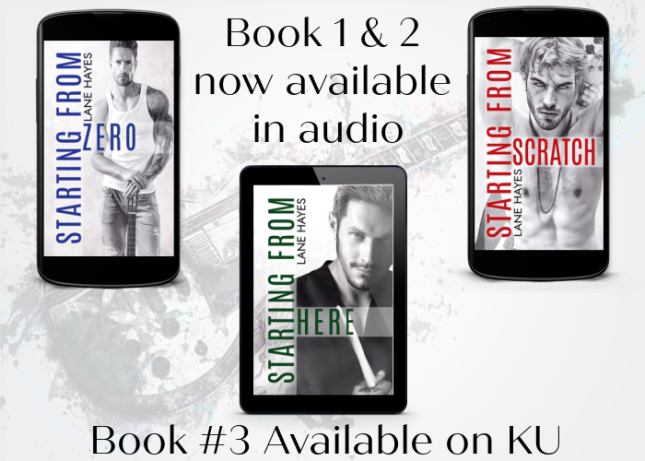 Hi there! Today I’m sharing a Throwback Thursday review for a contemporary M/M romance from Lane Hayes. STARTING FROM SCRATCH is the second book in the Starting From series. STARTING FROM ZERO and STARTING FROM HERE recount the falling in love stories of two members of an LA-based indie band called Zero.

Drop down to catch my review and enter the giveaway for a chance to win a $25 GC. 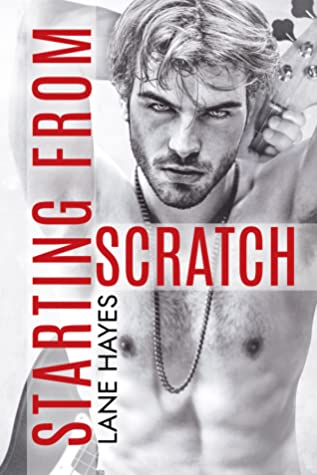 About the book:
Charlie Rourke is an ultra fabulous human whirlwind on a mission to launch the next biggest band in the world. However, he might have taken on more than he could handle when he signed on to manage Zero. Promoting a rock band and finding gigs shouldn’t be hard. They’re a talented group with a ton of star power. If Charlie can find the right record label, he’s sure he can help them get to the next level. The only problem is the skater boy slash bassist with a quirky sense of humor. He’s annoying and silly, and he’s exactly Charlie’s type. Except he’s straight.

Ky Baldwin isn’t afraid to switch things up. He loves a challenge as much as anyone, but Charlie doesn’t make things easy. Zero’s manager is a force of nature with a razor sharp tongue, a quick wit, and a no-nonsense attitude. Ky can’t stop thinking about him. Winning over Charlie becomes Ky’s pet project. But when the ice between them thaws, neither is prepared for the intensity of going from enemies to lovers. They’ll have to decide if they’re willing to start from scratch and take a chance on the unexpected.

My Review:
Charlie Rourke is a 25 y/o out gay internet influencer who has signed on to manage the indie band Zero. He met the lead singer, Justin, through his godfather, Grey, and Charlie wants to use his platform to promote their band as his true career path. He’s a business man, raised in Tinsel Town by Grey who was his father’s secret lover and more of a dad than Sebastian Rourke ever was. With Zero’s promotions to work on, Charlie has a direction, one that fills his time with purpose–besides caring for his 9 year old half-brother, Oliver. Ollie is a lonely kid, and he struggles to make friends. Charlie has a bit of a trouble with obsessing over small details, and right now he’s mostly stressing over the devotion of the bass player for Zero, and some rather nasty reviews of the band that are starting to gain traction.

Ky is the bass player in Zero and Charlie is more than a challenge to him. Ky is bisexual, not that he advertises. He’s a bit of a skater-man, could have maybe been pro, and he’s more into the band than Charlie suspects. Also, Ky’s way into Charlie–who returns his interest. Ky is amazing with Ollie, which pretty much demolishes all of Charlie’s reservations for falling hard for Ky. Ky has some secrets, mainly what a craphead his old man is, but he’s more that willing to schedule regular visits to teach Charlie to skateboard. And, to still Charlie’s whirlwind brain with a simple kiss, or a silly prank.

These mismatched men connect in ways they hadn’t predicted. It’s a fun counterpoint to the family drama each one faces. Charlie’s always felt a bit ignored by his father, while Ky’s dad is a manipulator extraordinaire. This means that they are both fiercely-independent in their own affairs, but they also long for a steady partner who will provide the missing emotional support in their lives. The subplot pulls in Declan McNamara, an ally-turned-rival who seems to be the focus of the nasty reviewer hounding Zero’s shows. The negative reviews are gaining traction and threaten to upset the recording contracts that Charlie is negotiating for Zero. Declan was involved in a band-destroying love triangle that caused Justin, and his drummer-pal Tegan, to break off from Gypsy Coma, the band they were a part of before forming Zero. And, as Charlie is well aware, bad publicity in the social media space can sink a band faster than a terrible song.

I listened to the audiobook version, and I really enjoyed the pacing and narrator’s range, which was able to manage female and child voices as well as the lower register of Ky and Charlie’s manic-mania dialogue. I was glad to keep going with this series, and looked forward to Tegan’s love story, which was the next book to come out.

In this story the issues each character has with his father affects the path of their life. Charlie doesn’t want to lean on his dad for much, because he’s been so unreliable. He does trust his dad’s keen insights and promotional advice, however, which do make a big impact on the resolution of the story. For Ky, he long-since realized that his father is only interested in his own happiness, and he is so mean-spirited and toxic that Ky is better off without contact–and that’s how he likes it. It was a nasty turn, his dad’s way of ingratiating himself into the Zero sphere, but Ky effectively closes the door, and solidifies his place in the band. Their love story is engaging, and well-told in the audiobook.

Interested? You can find STARTING FROM SCRATCH on Goodreads, Amazon, and Audible.

Click on this Rafflecopter Giveaway link for your chance to win a $25 Amazon gift card.
Good luck and keep reading my friends!

Hi there! Today I’m sharing a review for a newly-released contemporary M/M romance from Jay Northcote. STARTING FROM SCRATCH is the fifth book in the Housemates series of New Adult romances set in Bristol, England. I’ve read and enjoyed every one of them, and am always ecstatic when a new one comes out. STARTING FROM SCRATCH is more poignant to me, as a reader, because it features a transgender male character–very well informed by the author’s life experiences. In a time when TG issues are being wholesale discarded by legislators in the US, it’s fantastic to get authentic stories about everyday characters who are trans.

About the book:
Starting over isn’t easy, but Ben is ready to live his life as the man he was always meant to be.

Ben is transgender and back at university after hormone treatment and chest surgery. His new housemates have no idea about his history and Ben would prefer to keep it that way. He’s starting from scratch and his life is finally on track, except in the romance department. The idea of dating guys as a guy is exhilarating but terrifying, because if Ben wants a boyfriend he’ll have to disclose his secret.

Sid is drawn to Ben from the moment they meet. He normally gets what he wants—in the short term at least. Ben’s guarded at first, and Sid’s not used to guys rejecting his advances. He eventually charms his way through Ben’s defences and helps Ben on his journey of sexual awakening.

It doesn’t matter to Sid that Ben is trans. He’s attracted to the whole person, and isn’t worried about what is—or isn’t—in Ben’s pants. They’re good together, and both of them are falling hard and fast, but Ben’s insecurities keep getting in the way. If Sid can convince Ben he’s committed, will Ben finally be able to put his heart on the line?

Although this book is part of the Housemates series, it has new main characters, a satisfying happy ending, and can be read as a standalone.

My Review:
Ben is a twenty-five year old transman returning to uni following three years off to undergo trans treatment and surgery. He shares a house with five other guys–out-gay and bisexual men from earlier book in the series–but hides his trans identity, living as a man. It’s fascinating being inside Ben’s head–his fear that he’s not being honest, but also fearing that revealing his history will cause more trouble than he can manage.

Sid is a man wishing for a steady boyfriend. He’s not had any lasting relationships and wonders if he ever will. Meeting Ben while out with mutual friends seems like a perfect opportunity, but Ben rebuffs his overtures. Ben’s not down for a quickie, and doesn’t think he measures up to the standards Sid surely has. Thing is, Jude, their mutual friend, vouches for Sid–and that prompts Ben to reach out and build a friendship. That’s one of Ben’s big goals for the year, be more social and get over his insecurities. So they chat and text and get together for coffee. The more time they spend, the more invested they become. Ben’s nervous about revealing his chest scars–from top surgery–and his manbits are quite different from that of a cismale, but Sid’s not only compassionate, he’s intrigued with Ben for who he is–and their relationship grows openly and honestly.

I was floored by the detail and delicacy of the book. I’ve read a few trans novels and am always happy to learn more about this experience and the triumphs and challenges. The Housemates books are have lots of sexytimes–and there’s no exception here. The author does a great job of bringing Ben to life, and writing a love story that feels sensitive and sexy at the same time. It was easy to feel Ben’s insecurities–and those of Sid as well. He’s a wonderful character, who really investigates his own prejudices and if they pose a risk to Ben’s emotional well-being. I loved the vulnerability of both men, and how Sid doesn’t allow Ben to push him away when he makes a mistake or three. These guys are really interesting on their own, and their interactions with their housemates is as fun as always. Oh, Ben! He wasn’t a trusting sort, but Sid did win him over completely by the end.

Interested? You can find STARTING FROM SCRATCH on Goodreads and Amazon (US or UK). 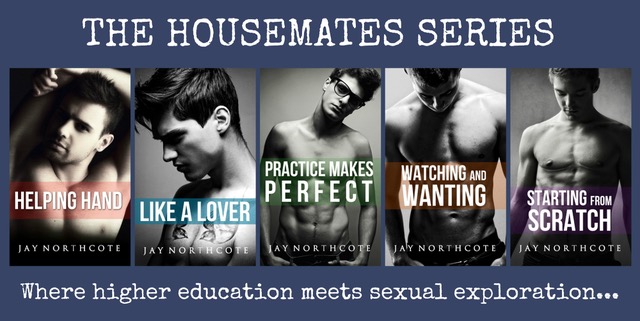