Hi there! Today I’m sharing a review for a brand new contemporary M/M romance from Lane Hayes. STARTING FROM HERE is the third book in the Starting From series. STARTING FROM ZEROkicked off this rock romance series with each member of the band Zero finding a solid lover. This book features former childhood friends turned rivals in an enemies-to-lovers story.

Drop down to catch an excerpt, my review and enter for a chance to win a $25 GC. 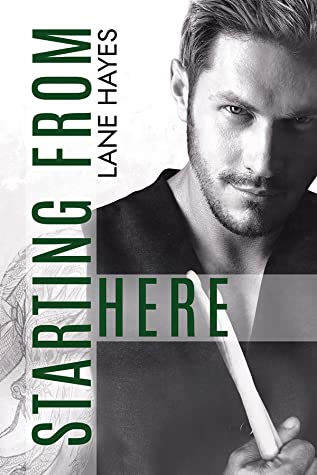 About the book:
Two bands, one goal, and a second chance…

Declan-
Everything is finally going well. I have a new band, a new label, and a debut album coming out. And then my drummer breaks his wrists. Just my luck. I need a quick replacement to record one more song, but my options are limited, and of course, the obvious candidate hates my guts. Okay, so I may have given him a few reasons over the years, but isn’t there an expiration date on holding a grudge?

Tegan-
I don’t trust Declan McNamara. Sure, he’s talented, smart, and has more sex appeal than any one person should be allowed. And yeah, he may be a rock star in the making, but beware—he’s trouble. However, our new record label’s survival may depend on a truce and extreme measures…of the fake boyfriend variety. If it’s our best shot at the big time, I’m willing to set the past aside and start over…here and now.

Starting From Here is a MM, bisexual romance rock and roll style…rival bands, fake boyfriends, and a second chance at a new love story. Each book in the Starting From series can be read as a stand-alone.

The sound of cheerful squealing rang in the background before she hung up. I stared into space for a minute or two, feeling very…alone. I didn’t want to slip into teenage levels of self-pity. There was really nothing lamer than a privileged grown-ass adult whining about mommy issues. I flipped through television channels, pausing on a special about great white sharks. Then I tossed the controller aside and picked up my cell again.
Would you ever swim with sharks?
My phone buzzed immediately. I smiled when Tegan’s name lit the screen. Are you high?
I wish. Swimming with sharks is a thing. People get in cages and film themselves being surrounded by predators…for fun.
People are fucking crazy.
True.
What are you watching?
National Geographic. I was hoping for a sex in the wild segment, but I got sharks instead.
Shark sex?
I grinned. Nope. I don’t think I’m ready for that.
It’s not exciting. Fish sex is seriously unhot.
True.
My chuckled morphed into a belly laugh as I sank deeper into the cushion. I shared a quick story about the saucy squirrels who were getting it on outside my window last spring. Tegan teased me for being a rodent voyeur, then recommended a few human porn sites I might appreciate instead.
Btw, it’s officially midnight. Congrats.
I stared at the screen for a moment. I typed and erased two or three thank-yous that seemed a little too effusive. I didn’t want to come across as too excited or too grateful and somehow clingy, so I gave up and pressed Call.
“Hey.”
“Are you really fucking calling me?”
I chuckled. “Yeah. I am. Thank you.”
“You’re welcome. But it’s midnight, and I hate talking on the phone, so good ni—”
“Don’t hang up.”
“What’s wrong?”
I stared at the TV unseeing. “Nothing. I just…I’m keyed up and I need someone to talk to. What was your first release like? I know Zero’s record is still doing well. But…what was like in the beginning? How’d you feel?”
Silence.
“You want the truth?”
“Yeah.”
“It was anticlimactic.”
“Oh. That’s kind of depressing.”
“No, it’s just life. Nothing ever happens as fast as you want it to. You’ve got to be patient and keep doing your thing,” he advised. “We came home from our summer tour thinking we made it. What didn’t turn into superstars, but we made progress. And every day it gets better. But who knows what will happen? Maybe you’ll wake up at number one. Just stay positive and…stop torturing yourself.”
I smiled when Tegan’s uplifting advice gave way to exasperation. It was cute.
“It’s what I do. I excel at the art of self-sabotage. Ask my mom. If I bomb, you can be sure she’ll be the first one to say ‘I told you so.’ She’ll choose her words carefully, though. She’ll be kind-ish before she gently suggests that it’s time to throw in the towel and join the family firm. Fuck my life.”
“But it’s your life. The honor of making mistakes or kicking ass is all yours. You wrote those songs to be heard. Not everyone will love what you do, but plenty of people will. You just gotta be right in your own head. Ask yourself if you gave your best. Did you?”
“Of course.”
“You’ll do just fine, then. If you sell a million copies, great. If not, you’ll still learn something.”
Silence.
“Thanks. I needed that,” I said softly.
“You’re welcome. Now go to sleep.”
“I’m an almost rock star, and it’s midnight. My night is just beginning,” I lied, stifling a yawn.
“Have fun, rock god,” he snorted.
“I’m kidding. I’m channel surfing.”
“You mean porn surfing?”
I barked a quick laugh. “No, I get my porn on the internet like everyone else. I was watching that show about hoarders. It made me feel better somehow.”
“You’re a freak. Get your computer and jack off. You’ll feel better, and you’ll sleep better,” he advised sagely.
“Thanks, Dr. Monroe. I’ll report back in the morning.”
“Not necessary. Especially if there’re boobs involved.”
“I watch more dick porn than chick porn. I watched a great locker room scene last night. The coach and the quarterback. Sexy as fuck.”
“Are you really sharing a spank-bank story?”
“Yeah, you want the link?”

My Review:
Tegan Monroe is a drummer for the newly-formed band Zero. He’s out gay and in his late 20s he’s been feuding with a childhood friend Declan McNamara for the last few years. Declan, Tegan, and their friend Justin were all part of a band called Gypsy Coma, which imploded when a love triangle was revealed. Tegan and Declan has been on and off lovers before that, but Justin and the band’s lead singer, Xena, had a spectacularly bad breakup which ended Gypsy Coma.

Justin and Tegan then formed Zero, while Xena went in one direction and Declan formed a band called Jealousy—which was signed by the same indie recording label that signed Zero, Scratch Studios. Despite their recent issues, the history behind Tegan and Declan is a powerful force, and Tegan’s personal struggles cause him to seek out Declan as a favor to his ailing mother. Declan’s trying to avoid getting trapped by his manipulative mother into some kind of scheme that would either reintroduce Xena drama, or cause Declan to drop out of his band, just on the cusp of breaking out in the LA music scene.

To get ahead of the stories and cut off a return to scandal, Declan and Tegan agree to pose as fake boyfriends to build buzz before their upcoming tours. No one knows that they’ve already begun some low-key reconciliations of the hate-sex kind.

This is an interesting twist on the enemies-to-lovers trope by having Declan and Tegan share a long-standing friendship that had already been sexual, before the introduction of all the drama. Pushing the fake boyfriends subterfuge onto them was a good foil to allow them to fully explore what they were already doing—just without the angst of trying to continue with the down-low tactics. These guys have always been attracted to one another, but they were never in the right headspace to build something long lasting. And jealousy, the emotion not Declan’s band, has definitely been an issue.

I like how Declan is so over all the sniping that he’s finally honest about everything. It helps when the spin-doctors start their voodoo to build the buzz. Tegan is definitely suffering, especially because of his mom’s illness, and Declan is strong enough to be the support he needs. The match between them has always been fraught with drama, but this time they decide to let the past stay there and just pick up from where they are. And that made all the difference. Expect some angry-sex morphing into friendship and happier moments before the drama creeps In. It’s a happy ending, and I think it may not be the last connection between Zero and Jealousy, going forward.

Interested? You can find STARTING FROM HERE on Goodreads and Amazon.

Click on this Rafflecopter Giveaway link for your chance to win a $25 Amazon gift card.
Good luck and keep reading my friends!

One thought on “Enemies to Lovers STARTING FROM HERE–Review and Giveaway!”