Hi there! In honor of my new “Filthy Forty” status…today I’m featuring a ménage freebie that I found delicious. Yep. It’s REALLY COOKING by Victoria Blisse and it’s sexy and scorching. 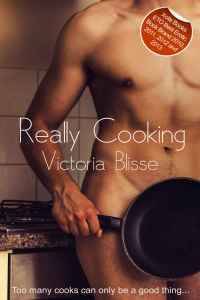 After breaking out of a truly awful relationship Paula finds herself floundering until she bumps into Gary. He cheers her up with a much coveted appointment at Flair, where more than her hair gets pampered. In return she offers Shane and Gary a cooking lesson to cheer up their ready-meal laden week.

The Friday feast turns into a sex-laden success and becomes a recurring weekly date. Paula loves having the sexual attention of two hot bi guys but longs for something deeper.

Shane sets her up with professional chef, Nigel McCormack. Paula responds to his dominant appeal and the delights of all three men together. But how will Paula fair when she takes up a position in Nigel’s professional kitchen, will she capture his heart or will he return to his first love, food?

My Review:
Paula is a bit adrift after cutting loose her boyfriend. Things hadn’t been progressing here and she wasn’t really looking for anything serious. What woman would, whilst out for drinks with gal-pals in a gay bar? Turns out Paula caught the eye of Gary, a rather good-looking man. Gay, and involved, but they had a great chat about how hopeless Gary is in the kitchen. Hit it off so well, Paula invites Gary and his partner, Shane, to her home for a dinner and cooking lessons. They have fun, and it’s quickly mentioned that Gary and Shane aren’t gay—they’re bisexual. And hungry for more than dinner.

Soon the three have regular Friday night meet-up. Paula’s a bit stunned at the new sexual kink in her life, but she isn’t complaining. Not even when Shane invites a friend…master chef Nigel.

Nigel is a busy man, running a first class restaurant, but his social life is nonexistent. The thrill Paula receives, being one-on-one with Nigel, and as part of their ménage, is better than she could have hoped for. And, he loves her food to boot! They take up a side romance, hampered by Nigel’s hectic work schedule–until the unthinkable happens, and Paula’s no nonsense, fix-it skills lead Nigel into a great opportunity–cooking shows on TV. Can these two maintain their off-screen kink? Or, will too many cooks spoil the dish? (Expect some conniving employees and a stalwart Paula!)

I flew through this. It’s a Brit book, so the format and diction are appropriate for Londoners, which I enjoy. The story moved along quite quickly, with lots of smexytimes and all of it feeling well-grounded. Paula is ashamed about her new sexual naughtiness, and keeps it all hush-hush, but she privately revels in her sexuality. And, Nigel is good, too. I ached with loneliness, as did Paula, when he was too busy to see her. Their chemistry was just so pleasant. Loved the ending. Hoping for the best with those two, or four, or….it’s ménage, folks.

Interested? You can find REALLY COOKING on Goodreads, Amazon, Barnes & Noble, but it’s FREE on iTunes until 9/30. Couple clicks and you’ll have this baby heating up your eReader—for nada, gratis and zilch.

Victoria is also one of the brains behind the fabulous Smut Events, days dedicated to erotica, fun and prizes. Check out Smut Manchester (15th Nov 2014), Smut Luton (7th March 2015) and Smut by the Sea: Scarborough (23rd May 2015) for more info.

She is equally at home behind a laptop or a cooker and she loves to create stories, poems, cakes and biscuits that make people happy. She was born near Manchester, England and her northern English quirkiness shows through in all of her stories.

Don’t forget to enter into MY BIRTHDAY GIVEAWAY-for a $40 gift card or a box o’ books Two weeks until the winner is selected.