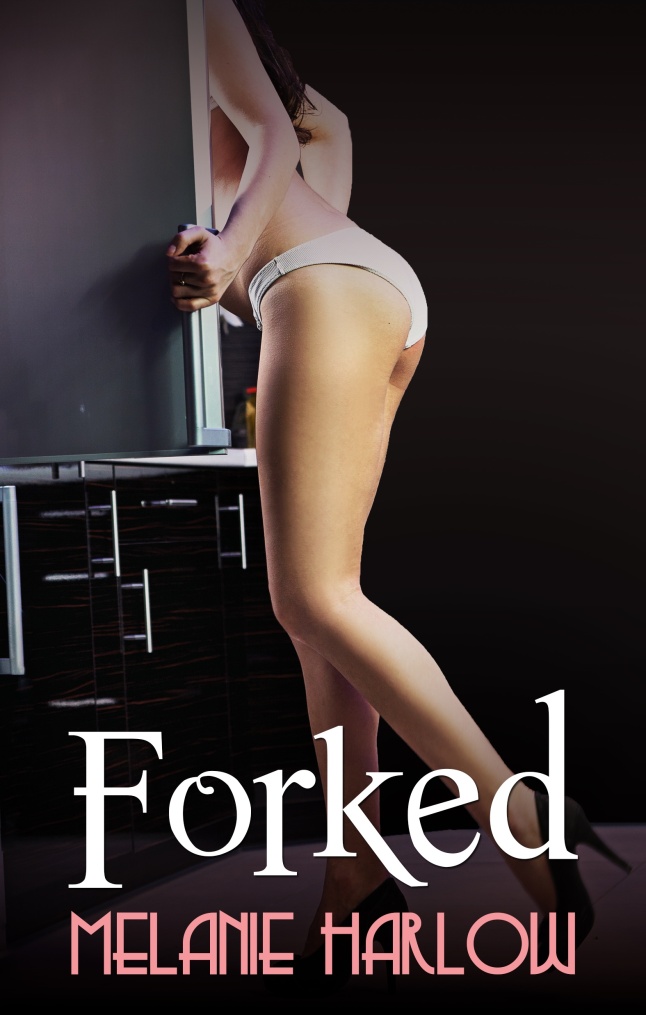 (Book 2 in the FRENCHED series)
by Melanie Harlow
A  Sexy Adult Contemporary Romance
“Coming” September 2014
Twenty-eight year old Coco Thomas knows the recipe for disaster:
1)      Agree to plan last-minute engagement blowout for spoiled Mafia princess before you realize her choice of caterer is Nick Lupo, a despicably gorgeous young chef with a hot new restaurant in town, a reality TV show victory, and a romantic past with you—one that did not end well.
2)      Strike a deal with Nick in which you agree to spend a weekend with him in exchange for his services, under the strict conditions there will be no talking about the past, no second chances, and definitely no sex.
3)      Violate all three conditions within 24 hours and spend two glorious days remembering what made you fall for the sexy, egotistical bastard in the first place, and why it hurt so much when he broke your heart.
Add one road trip, plenty of good scotch, and endless spoonfuls of chocolate cake batter drizzled over your body and licked off inch by oh-my-God-yes-right-there inch, then just admit it.
You’re totally FORKED.

Want to get caught up? Check out my review of the super-sexy novel that sparked the series: FRENCHED. (I cannot vouch for the purity of any flat surface contained within the book. Just sayin’.)

About the Author
Melanie Harlow likes her martinis dry, her lipstick red, and her history with the naughty bits left in. Her stories are inspired by a sense of place, an appreciation for the past, and unexpected pleasures in life—especially the romantic kind. She lifts her glass to readers and writers from her home near Detroit, MI, where she lives with her husband and two
daughters.

Hi there! Today’s book is a contemporary M/M romance from Leta Blake. I just adored TRAINING SEASON and jumped at the chance to read more of her work. THE RIVER LEITH is a mind-bender. Mostly because Leith has retrograde amnesia and can’t remember the past three years of his life…. 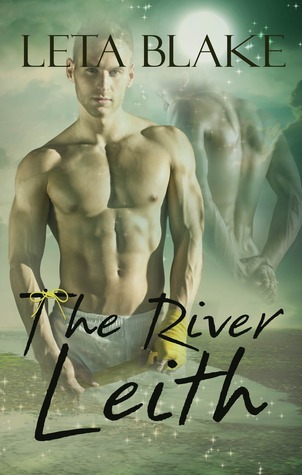 After an injury in the ring, amateur boxer Leith Wenz wakes to discover his most recent memories are three years out of date. Unmoored and struggling to face his new reality, Leith must cope anew with painful revelations about his family. His brother is there to support him, but it’s the unfamiliar face of Zach, a man introduced as his best friend, that provides the calm he craves. Until Zach’s presence begins to stir up feelings Leith can’t explain.

For Zach, being forgotten by his lover is excruciating. He carefully hides the truth from Leith to protect them both from additional pain. His bottled-up turmoil finds release through vlogging, where he confesses his fears and grief to the faceless Internet. But after Leith begins to open up to him, Zach’s choices may come back to haunt him.

Ultimately, Leith must ask his heart the questions memory can no longer answer.

My Review:
One month ago Leith was hit by an illegal blow in the ring causing a traumatic brain injury. When he wakes from his coma, memories of the past three years of his life are gone. He thinks he’s still in prison, that his father is still alive, that he’s a straight man. None of these are true. Or, are they?

Leith latches on to his brother, Arthur, adrift in loss. Arthur tries to help, but the advice is to reveal little in terms of the lost years, to wait until Leith recovers the memories–if Leith does. See, they don’t want to upset Leith with too many uncertainties–he’s a bit unmoored emotionally, and strong. When he first saw Arthur and learned all he had lost, Leith struck out and clocked his brother in the jaw. Control of his life, and his temper, is hard for the new Leith.

“Friends” visit the hospital to help his transition, but Leith doesn’t remember any of them–not even Zach. Zach is introduced as his “best friend”, but the reader knows more than Leith. He and Zach had been lovers for a year, and totally committed. Zach’s heartbroken, and trying to maintain a brave face, but his video blogs show the gaping cracks in the facade.

Throughout, Leith agonizes to regain his foothold in his new reality. The only thing he knows for sure is the calmness he feels when Zach visits. He longs for more time with his “best friend” and is confused by the sexual arousal he feels in Zach’s presence. Zach’s nearness yet seeming indifference leads Leith to believe his attraction to Zach was one-sided before the injury, and he’s conflicted about revealing his “new” feelings. Meanwhile Zach is falling apart thinking Leith will never love him again. It sparks a one-night stand that comes back to haunt Zach. Big time.

In some ways, Leith died in the ring. The post-injury Leith is a different man in so many aspects, but it may be that this man is a better man, a more stable partner, than the man Zach first loved.

As time moves on, Leith is better able to control his temper–revealing his feelings for Zach helped immensely–but there are still struggles. Leith wants to box again. It was a major way he coped throughout his life, and the absence of that physicality brings its own strain. And Zach is terrified that one bad hit will kill the man he has had to woo, and come to love, twice over.

While this book centered on amnesia, there are lots of people who endure other neurological injuries and have personality changes. The hardest thing for their loved ones to reconcile is the change–Zach is a good partner, but a confused man in his own right, understandably so. His love has suddenly and without question forgotten him completely. He could walk away, but he doesn’t. His struggle is no less hard than Leith’s–overcoming his own memories to make a totally new life with a Leith is a decision. I was glad he made the right one.

The book is brutal in its emotional landscape. Highs and lows. Confusion and resolution. Anger and peace. And, love. At the center, love shines. Zach’s patient acceptance, bringing all Leith’s fave foods to the hospital. Moving out so Leith can have his own space to reconnect. Coming back after Leith clobbers him in a blind rage. All of these are acts of love. Leith working to regain his memories, his sense of self, so he can recover the good times of his life with Zach is an act of love. Even more so, Leith abandoning this effort and committing to simply making new memories is the biggest show of his love.

At times I just wanted to reach into my iPad and grab these two into a group hug and whisper that it was all going to work out. To that end, I kinda felt the resolution was a teeny bit rushed. That said, I loved the book. The smexytimes were predictably hot and fantastic, so thanks for that. I had to chuckle when Leith’s doctor said it was time to leave the hospital because all the nurses were distracted trying to get a peek of Zach and Leith together….LOL, for real. The book steams, so not safe for the youngin’s.

Interested? You can find THE RIVER LEITH on Goodreads, Amazon and Barnes & Noble. I snatched a copy from NetGalley in exchange for this honest review.

While Leta Blake would love to tell you that writing transports her to worlds of magic and wonder and then safely returns her to a home of sparkling cleanliness and carefully folded laundry, the reality is a bit different. For as long as Leta can recall, stories have hijacked her mind, abducting her to other lands, and forcing her to bend to the will of imaginary people. This absence from reality results in piles of laundry and forgotten appointments. In between abductions, Leta works hard at achieving balance between her day job, her writing, and her family.

I’ve joined up with The Armchair Squid‘s once-monthly book review to link with other bloggers and offer suggestions of the best books read in the course of the month. We’re linking blogs on the final Friday of each month and each bringing you  the ‘Best of our Best’ just in case it strikes your fancy.

For my selection this month I’m discussing two novellas I found to be surprisingly good, the first two episodes in the Deadly Liaisons serial by Leigh Wilder.

Maybe it’s me, but when I hear of vampire erotica that’s ‘gayer than Twilight’ I get the giggles something fierce. I just had to bite… 😉

First up:  DRAIN ME DRY

See, I’ve read erotica. And I’ve read vampire. And I read a ton of romance. I’ve even read homoerotic tales…and I never expected this to work.

But it so did.

I really loved how Wilder created compassionate, and passionate, characters here. The setting is alt-history, small-town Pennsylvania where vampires exist openly and are allowed to feed, but not kill or turn a victim into a vampire. (Spoiler: um, yeah, sometimes either or both happens…)

Jamie is a nineteen y/o human with homoerotic desires, but has never tested himself. He’s also very insecure, undersized, and regularly abused by his alcoholic father. His Taco King job sucks and he’d like to die, but he’s too timid to kill himself. Working with a vampire, Jamie concocts a plan to have a vampire drain his blood. Reluctantly, his co-worker gives Jamie the name of a place where such a plan can become a reality.

Damian is THE vampire. The eldest of all vampires in town, he’s slumming in a blood den when Jamie approaches him, struck by Damian’s beauty.

Jamie wants this beautiful ‘angel’ to suck the life from him, but Damian realizes that Jamie’s something rather special. The result is a very well-written, tender interlude. Though it is a short read (this is the first of a serial) the end is satisfying for the reader as well as the characters.

Soon as I finished DRAIN ME DRY I downloaded Episode 2, ADDICTED TO THE BITE.

In this second episode, Damian and his Jamie-boy are back.
After one night in Damian’s bed, Jamie wants more. Especially now that his abusive father has been sorted. He is not happy to learn that he can’t be Damian’s steady lover…mostly because Damian must feed more regularly than Jamie’s body can withstand.
Damian, as head vampire, is prevailed upon to find a serial drainer–a vamp who has killed two young men in as many nights by sucking every drop of blood from their bodies. Law enforcement is on his case about the murders, meanwhile the Daybreakers, humans who hate vampires, plot to destroy Damian’s club.

Jamie, out to prove that he can survive frequent bleedings, meets a strange vampire in Damian’s club and get caught in the Daybreakers strike…

This episode moves quickly. While building upon the first story, its plot stands alone as well. Definitely more here than biting and screwing, and I’m intrigued to read on.

Next month I’ll get the linky-links for my fellow Coffeehousers–so hopefully you’ll check those out Sept 27th!