How much must an athlete sacrifice for Olympic glory? 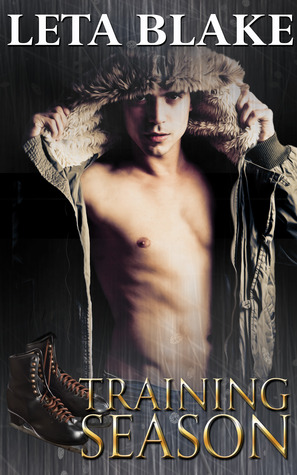 Leta Blake‘s TRAINING SEASON is just the thing to get you out of your post-Olympics slump. This contemporary, M/M romance follows the Olympic dreams of figure skater Matty Marcus as he rebuilds his mind, body, and career. Too bad he didn’t workout his heart…

Matty Marcus is a World Champion figure skater recovering from a back in jury and a disappointing showing at the Olympics. He is on the verge of bankruptcy and needs money to begin training for the next Olympics two years away. One of his fans offers him a lot of money to house-sit for her Montana ranch and horses while on a six-month trip to Australia/Asia. Having no better prospects, Matty agrees.

Problem is, Matty’s flamboyantly gay. He, perhaps, never says this explicitly in his interviews, but he wears women’s clothes and shoes and makeup, so…it’s pretty obvious. He can’t really un-gay himself, even if the judges don’t favor it.

Matty’s a bit afraid that he’ll run up against some gay bashing in his new remote locale, but, what he finds is his new neighbor–the man who owns the next ranch over, is himself gay. Rob is much more the burly, athletic, male specimen, but he’s drawn to Matty and they engage in a passionate affair. This passion is tinged with frustration, however, knowing that Matty’s time is fixed. Still, Matty bonds with Rob’s son, Ben–a pre-teen boy interested in figure skating. Matty relates well with Ben, recognizing the boy has size and power that Matty lacks. Masculinity is now being highly regarded in the figure skating world, and though Matty has talent, he can’t change his stature.

Rob gets Matty. He sees how he struggles–to maintain his weight, his focus, with his fear of failure and his self-loathing for previous failures–and through some Dom/sub interactions Matty experiences an emotional purging. They are deeply connected with one another, more so than either had been with another man before.

Still their time comes to an end and Matty asks for a clean break–knowing he will devote himself 24/7 for the next two years to his dream of Olympic gold. Because of this, Matty is, in part, better able to focus on skating as a means to bury his grief over letting Rob go.

Matty trains relentlessly and achieves his Olympic dream…sort of. Even years later, he struggles with the loss of Rob, and contemplates giving up his competitive career. While recuperating from yet another sidelining injury, Matty discovers Ben in training for junior figure skating competitions. Matty connects with Rob again, but Rob is unwilling to pick up Matty’s pieces. Again. Rob can’t bear any more diet management and ten hour training days, seeing the love of his life sacrifice everything for figure skating, when the rewards are so slim.

About 3/4 of the way through this book I just started crying.

See, I’ve been around elite athletes–people training for the Olympics/World Championships. Not figure skaters, but intense, driven individuals who will sacrifice everything to attain their goals of competing/winning at that level. Moving across country to train with an esteemed coach. Families investing their entire financial resources behind the training of a promising athlete. The sacrifices Matty makes seem very much in line with those people. The constant training, the constant diet management, forgoing relationships in order to “stay focused”; this is the hallmark of many an elite athlete. It was so hard to read Matty’s struggle for that reason–because I know this is happening right now with talented athletes who are great, and perhaps–like Matty–amazing, and yet, who will not see the top of the podium, nonetheless.

This book, by the way, is not an indictment of elite sports. It is a realistic portrayal of the sacrifices some athletes will make to achieve. I was satisfied that Matty really learns what is most important in his world; what he is willing to settle for, and that which will bring him the most happiness.

Interested? You can find TRAINING SEASON at Goodreads, Amazon and Barnes & Noble.

I received a free copy of this book with the Don’t Buy My Love program at Goodreads in exchange for an honest review. Reading this story I had the image of Johnny Weir in my head the whole time. So will you…

Thanks for stopping by! And, keep reading my friends!

One thought on “He Sacrificed for TRAINING SEASON–A Review”