Hi there! Today I’m featuring a new urban fantasy–which I’m sure will become a series–from Rhys Ford. INK AND SHADOWS is my first book from Rhys Ford, and I’m glad to saw it was a stellar read. This is a M/M book, but there is little romance and no sex. It really only has gay characters, some of whom want relationships and others who do not…but the STORY is about the Veil and what lies in wait behind it. 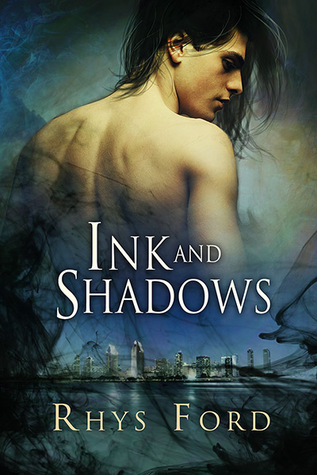 Kismet Andreas lives in fear of the shadows.

For the young tattoo artist, the shadows hold more than darkness. He is certain of his insanity because the dark holds creatures and crawling things only he can see—monsters who hunt out the weak to eat their minds and souls, leaving behind only empty husks and despair.

And if there’s one thing Kismet fears more than being hunted—it’s the madness left in its wake.

The shadowy Veil is Mal’s home. As Pestilence, he is the youngest—and most inexperienced—of the Four Horsemen of the Apocalypse, immortal manifestations resurrected to serve—and cull—mankind. Invisible to all but the dead and insane, the Four exist between the Veil and the mortal world, bound to their nearly eternal fate. Feared by other immortals, the Horsemen live in near solitude but Mal longs to know more than Death, War and Famine.

Mal longs to be… more human. To interact with someone other than lunatics or the deceased.

When Kismet rescues Mal from a shadowy attack, Pestilence is suddenly thrust into a vicious war—where mankind is the prize, and the only one who has faith in Mal is the human the other Horsemen believe is destined to die.

The Four Horsemen, Death, War, Pestilence and Famine are immortals who live on earth, hidden behind the Veil which shrouds the Fae, Darkfae and other immortals, like the Vitues: Faith Charity, Peace and Hope (among others like Gluttony, Lust and Luck…) from the sight of mortals. Except crazies and seers can sometimes see them. Kismet is likely crazy, but he’s had the “gift” of sight since childhood. He is terrorized by his constant observations of wraiths and ghosts, including that of his younger brother who was inadvertently poisoned by their addict mother. Kismet is crippled by his visions, and self-medicates with heroin to keep the wraiths from attacking his mind.

Kismet sits at the center of an intricate plot to remove some immortals from their Calling. See, if people need help crossing planes, Death can be summoned. If someone is in need of Hope, she must appear–and this is a tiring existence for an immortal. Some want to settle down, have a “normal” life, perhaps even fall in love, and Kismet’s ability to see through the Veil may hint at deeper abilities. Spiking his heroin dose with an agent of magical origin kicks off the action.

Pestilence, known as Mal to his Horsemen, is lonely. He wants a partner outside of his group, and he’s too inexperienced as a Horseman to properly wield the Veil. War (Ari) yearns for more than kinship with Death, the eldest and most powerful of the Horseman. Ari is indefatigable in his pursuit, and Death welcomes his closeness, but keeps it platonic, fearing the loss of his soul if he should lose Ari, his best friend and confidante, for any reason.

Ari and Mal encounter Kismet while on patrol, and he’s in serious trouble–a powerful wraith has been summoned and is nearly finished killing him…except, Kismet survives the attack in the same fashion that an immortal might. It freaks both Mal and Ari out, and Mal insists on bringing him to Death for advice. Pretty much things get bad right after that.

As I mentioned, this isn’t a romance, though the background is set for advancement of romance in a later book. Also, this book fully resolves, while still leaving plot arcs available for a sequel, or series. Through it all we have good guys acting badly, “bad” guys behaving with honor, new friendships (Kismet and Mal) and deepening ties (Ari and Death). I really enjoyed the back-and-forth banter between the Horsemen, and also how committed they are to holding each other up. This book is almost exclusively told from behind the Veil, with the immortals carrying most of the POV. I did have some issue with the rapid POV shifts–this is a particular peeve of mine. I like to stay in one character’s head for a scene, but the POV jumped constantly. It was less jarring than other books I’ve read, but still detracted from my enjoyment.

On the plus side, the prose is stellar, really wrapping the reader in this world within a world. The emotional landscape is rich and I had a great experience feeling Death’s pain, Ari’s deep love, Mal’s isolation and Kismet’s fear. The action is fast and fierce, with copious attacks, rescues and near-death experiences for far too many immortals. Looking forward to the next installment! (Fingers crossed for a some love scenes!!!!)

Interested? You can find INK AND SHADOWS on Goodreads, DSP Publications, Amazon, and Barnes & Noble. I received a review copy of this book via NetGalley.

Rhys Ford was born and raised in Hawai’i then wandered off to see the world. After chewing through a pile of books, a lot of odd food, and a stray boyfriend or two, Rhys eventually landed in San Diego, which is a very nice place but seriously needs more rain.

Rhys admits to sharing the house with three cats of varying degrees of black fur and a ginger cairn terrorist. Rhys is also enslaved to the upkeep a 1979 Pontiac Firebird, a Toshiba laptop, and an overworked red coffee maker.