Hi there! Today I’m sharing a review for a new contemporary Boys Love manga/graphic novel from Edako Mofumofu. THERE ARE THINGS I CAN’T TELL YOU features two young Japanese men who’d been lifelong friends, but drift apart because they can’t admit their love for one another.

About the book:
Kasumi and Kyousuke are polar opposites when it comes to personality. Kasumi is reserved, soft-spoken and shy; Kyousuke is energetic and has always been popular among their peers. As the saying goes though, opposites have a tendency to attract, and these two have been fast friends since elementary school.
To Kasumi, Kyousuke has always been a hero to look up to, someone who supports him and saves him from the bullies. But now, school is over; their relationship suddenly becomes a lot less simple to describe. Facing the world — and one another — as adults, both men find there are things they struggle to say out loud, even to each other.

My Review:
This is my first Boys Love manga/graphic novel, and I must say, I really liked it. Kasumi and Kyousuke are two Japanese men who met in grade school. Kasumi comes from a home of loneliness and neglect, and he’s withdrawn as a result. Kyousuke is a popular and active kid whose excellence in drawing and design is denigrated by his father, an accomplished graphic designer. They both have wounds, and each is glad to make the acquaintance of the other in school.

Once they graduate they drift apart, however. Kasumi doesn’t know why, and it leads him into unsatisfactory relationships. Kyousuke was a child when he recognized his unnatural attraction to men, and he’s long since internalized his father’s homophobia. He doesn’t want to ruin Kasumi’s life by latching onto him like a pervert, so he pulls back, thinking it will set Kasumi up for finding the “right” (heterosexual) path. Learning his absence has hurt Kasumi is a big turning point for Kyousuke–and amends are made.

(C) Edako Mofumofu. Panel from THERE ARE THINGS I CAN’T TELL YOU published by TokyoPop

The art was evocative and approachable with little touches of body humor. It’s was realistic, not representational, and the sexytimes were not shy. I had no trouble feeling in the moment with these characters, whether the scenes were mundane or intimate. Kasumi is the dark-haired one in glasses, and Kyousuke has light hair. Their opposite looks mirror their opposite temperment, with Kasumi hiding behind his hair and glasses, while Kyousuke is only satisfied when he’s winning attention. He works hard for the right kind of attention, and Kasumi idolizes him, loves him, because Kyousuke was the only person in his life who really cared if he lived or died.

Their struggles as a couple are dramatically rendered, and adequately resolved. At least between them. I didn’t see any public acknowledgement of their love, but that may be normal and excepted both culturally and within this format.

Interested?You can find THERE ARE THINGS I CAN’T TELL YOU on Goodreads, Amazon, Barnes & Noble, and Kobo.

Hi there! Today I’m sharing a review for a contemporary LGBTQ YA graphic novel from the writing team of Alex Sanchez, Julie Maroh and the DC Universe. YOU BROUGHT ME THE OCEAN is a creative re-imagining of Aqualad’s origin story, falling for a boy while growing up in Truth or Consequences, New Mexico.

About the book:
Jake Hyde doesn’t swim––not since his father drowned. Luckily, he lives in Truth or Consequences, New Mexico, which is in the middle of the desert, yet he yearns for the ocean and is determined to leave his hometown for a college on the coast. But his best friend, Maria, wants nothing more than to make a home in the desert, and Jake’s mother encourages him to always play it safe.

There’s nothing “safe” about Jake’s future—not when he’s attracted to Kenny Liu, swim team captain and rebel against conformity. And certainly not when he secretly applies to Miami University. Jake’s life begins to outpace his small town’s namesake, which doesn’t make it any easier to come out to his mom, or Maria, or the world.

But Jake is full of secrets, including the strange blue markings on his skin that glow when in contact with water. What power will he find when he searches for his identity, and will he turn his back to the current or dive headfirst into the waves?

My Review:
Jake Hyde is an African American high school senior growing up in land-locked Truth or Consequences, New Mexico. His best friend, and next-door neighbor, Maria has a deep and unrequited crush for Jake. Jake suspects this, and tries to maintain some distance, because he really cares for Maria but he’s pretty sure that he’s got his own crush…on Kenny Liu, a green-haired swimmer at school. Kenny is out and proud, fighting back against bullies Jake doesn’t really want to tangle with.

Jake has no knowledge of his father, and his overprotective mom works long hours as a nurse, so he spends a lot of time bonding with Maria’s father. Jake has secretly applied to Miami University to study marine biology, his real passion. This is antithetical to Maria’s plans to attend the Univ of New Mexico together–and to stay far from the ocean–his mom’s dearest wish.
The essential conflicts are clearly elaborated in the limited writing format of the graphic novel, and well-supported by the evocative illustration. It’s easy to read the youthful yearning of Jake, Maria and Kenny. Their expressions and body language translate the story without confusion The bullies are ever present, and Jake is about to discover the true nature of the odd markings on his arms.

I enjoyed the story, which has a predictable, yet affirming, coming-out story. For me, knowing that this was a coming-out story, as well as an origin story, meant the plot needed to encompass a lot of changes in a little time. Jake has to navigate the difficult conversations with Maria, Kenny, and his mom about his plans, his attractions and the startling powers he’s discovering by accident. I felt the combined written story and illustration did manage to support the many points of intersection between youth, sexuality, coming of age, and development of Aqualad’s powers. 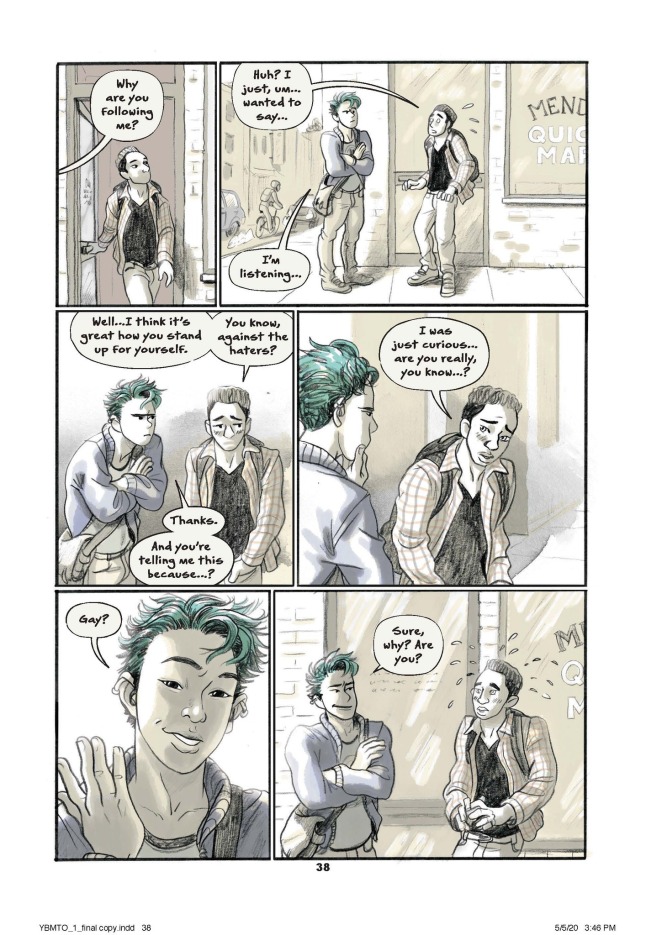 I read a preview copy and couldn’t stop turning the pages. I enjoyed the artwork, felt it conveyed all the descriptions a traditional novel would describe. It’s a compelling story, and I appreciated the inclusive character drawings. Kenny’s Asian-American, and Maria has Mexican descent. The youthful struggles Jake experiences are only magnified by the increased inadvertent development of his water-bending powers. The secret of his paternity is a heavy burden to carry, and I liked how that solidified his resolve to make better choices. He’s able to best his bullies, using good sense and a little bit of humor. The resolution demonstrates Jake’s willingness to do the right thing, taking his place in the DC superhero pantheon. He’s true to himself in all the ways possible.

Interested? You can find YOU BROUGHT ME THE OCEAN on Goodreads, Amazon, Barnes & Noble and wherever graphic novels are sold. I read a review copy provided by NetGalley.

About the Author:
Alex Sanchez has published eight novels, including the American Library Association “Best Book for Young Adults” Rainbow Boys and the Lambda Award-winning So Hard to Say. His novel Bait won the Tomás Rivera Mexican American Book Award and the Florida Book Award Gold Medal for Young Adult Literature. An immigrant from Mexico, Alex received his master’s in guidance and counseling and worked for many years as a youth and family counselor. Now when not writing, he tours the country talking with teens, librarians, and educators about books, diversity, and acceptance. He lives in Penfield, New York.

About the Illustrator:
Julie Maroh is a cartoonist, illustrator, feminist, and LGBTQ+ activist from Northern France. They wrote and illustrated the graphic novel Blue is the Warmest Color, about the life and love of two young lesbians, which was adapted into the award-winning film of the same name.

About DC’s YA Graphic Novels:
DC’s young adult graphic novels introduce DC’s most iconic Super Heroes to a new generation of fans with stories told by some of the most successful authors from the young adult publishing space. The YA titles are standalone stories, not part of DC’s ongoing continuity, and completely accessible to new readers who have no previous knowledge of DC characters.