Hi there! Today I’m sharing a review for a new contemporary Boys Love manga/graphic novel from Edako Mofumofu. THERE ARE THINGS I CAN’T TELL YOU features two young Japanese men who’d been lifelong friends, but drift apart because they can’t admit their love for one another. 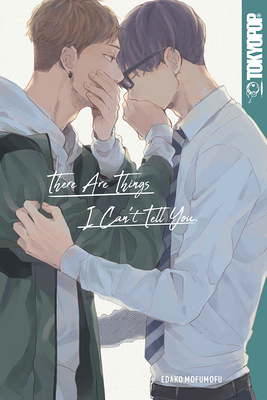 About the book:
Kasumi and Kyousuke are polar opposites when it comes to personality. Kasumi is reserved, soft-spoken and shy; Kyousuke is energetic and has always been popular among their peers. As the saying goes though, opposites have a tendency to attract, and these two have been fast friends since elementary school.
To Kasumi, Kyousuke has always been a hero to look up to, someone who supports him and saves him from the bullies. But now, school is over; their relationship suddenly becomes a lot less simple to describe. Facing the world — and one another — as adults, both men find there are things they struggle to say out loud, even to each other.

My Review:
This is my first Boys Love manga/graphic novel, and I must say, I really liked it. Kasumi and Kyousuke are two Japanese men who met in grade school. Kasumi comes from a home of loneliness and neglect, and he’s withdrawn as a result. Kyousuke is a popular and active kid whose excellence in drawing and design is denigrated by his father, an accomplished graphic designer. They both have wounds, and each is glad to make the acquaintance of the other in school.

Once they graduate they drift apart, however. Kasumi doesn’t know why, and it leads him into unsatisfactory relationships. Kyousuke was a child when he recognized his unnatural attraction to men, and he’s long since internalized his father’s homophobia. He doesn’t want to ruin Kasumi’s life by latching onto him like a pervert, so he pulls back, thinking it will set Kasumi up for finding the “right” (heterosexual) path. Learning his absence has hurt Kasumi is a big turning point for Kyousuke–and amends are made.

(C) Edako Mofumofu. Panel from THERE ARE THINGS I CAN’T TELL YOU published by TokyoPop

The art was evocative and approachable with little touches of body humor. It’s was realistic, not representational, and the sexytimes were not shy. I had no trouble feeling in the moment with these characters, whether the scenes were mundane or intimate. Kasumi is the dark-haired one in glasses, and Kyousuke has light hair. Their opposite looks mirror their opposite temperment, with Kasumi hiding behind his hair and glasses, while Kyousuke is only satisfied when he’s winning attention. He works hard for the right kind of attention, and Kasumi idolizes him, loves him, because Kyousuke was the only person in his life who really cared if he lived or died.

Their struggles as a couple are dramatically rendered, and adequately resolved. At least between them. I didn’t see any public acknowledgement of their love, but that may be normal and excepted both culturally and within this format.

Interested?You can find THERE ARE THINGS I CAN’T TELL YOU on Goodreads, Amazon, Barnes & Noble, and Kobo.