Hi there! Today I’m chatting about a series of books I’ve received as a reviewer in the M/M Romance group on Goodreads. This is a closed group, but you simply need to request admission, and voila! You’re in. I started reading M/M, or Gay, romance about two years ago. As I’ve mentioned before, I find the struggles of gay/lesbian characters to be uniquely poignant. Not only do these characters have to overcome enormous social pressures, they often have many unsatisfying relationships–either straight, or gay–before finding that “special” match. And I love me a good love story.

Kimber Vale has put out three books this year that I have read. They are a series, but can be read separately. As a reviewer, I received all of these free in exchange for my honest review. And, honestly, I really enjoyed them. Perhaps you will too. I have posted a mini-review for each to give you a flavor of my opinion, with the links to my full Goodreads review if you’d like more info.

These are adult reads, and have a decent level of steam, all within the confines of a monogamous, newly-developed, gay relationship. 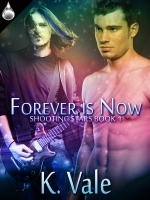 Alex Bremen and Chance Ralan were high school boyfriends, in the closet, until Alex’s abusive father found out. They had written music together and Chance looked to break out with a band–when they are caught he flees Alex, and doesn’t look back.

Nine years later, Alex is a buff, out gay man, successful in his career as a filmographer. He’s pretty much coasting romantically, unwilling to trust his heart long-term. Then a love song he wrote for Chance back in high school suddenly plays on the radio. With Chance singing it. Outraged, Alex decides he’s going to confront Chance the best way he can–by contracting to make a rockumentary film about Chance’s up-and-coming metal band Armageddon Showdown.

It’s a strong M/M romance with all the right elements. Also, I’m a fan of rock romance, so this one really played to my interests. Alex is a solid character. Despite his anger and hurt surrounding Chance’s abandonment, he’s willing to get to know Chance again, and finds the man has developed a maturity that is as attractive as his rock-god persona. Chance, now grasping the success he’s always craved, realizes that it’s a hollow victory without someone to share his personal life. And Alex is only ten thousand times more appealing as a full-grown man.

The sex? Molten. Really. Delish, having these two experience the passion of youth tempered with experience. Liked the book a whole bunch. Had a few issues with plot logic, but they were minor. Supporting cast was exactly that–supportive–excepting one jealous lover and one bigot. But the coming out party was way better than Chance had expected. This book is sure to satisfy. 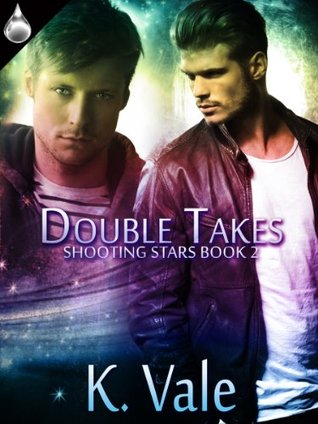 Gio Savale is an agin rocker (41 y/o) going through a nasty divorce. His band is working on a come back album, and he’s in the midst of a reality show about rockers’ real lives. Only, the show is boring. The producers want to cancel, but it would mean Gio losing out on a ton of cash–money he needs to pay for his attorneys and studio time. The show producers think it would be a great idea to bring in a love interest to spice up the show–and they hire a gay man, citing a long ago comment in a Rolling Stone interview when Gio confessed to being bisexual.

Well, those dodgy escapades all happened when Gio was strung out on drugs. He’s not really into guys, or is he? Having no way out, but through, Gio allows the farce to go on, hoping that the added publicity will get him some new gigs to pay his way out of the show’s contract.

In the meantime, Gio heads to an antique shop to get help selling all the furnishings his ex left behind. There he meets buff, masculine Lance. And, Lance is a BIG fan of Gio’s music. Suddenly Gio isn’t wondering if he’s bisexual. He’s wondering if he isn’t gay altogether.

Oh, and Lance has a deep dark secret that just might end in murder, if it’s uncovered.

So, yeah. It gets uncovered.

I liked the story. I really liked the tie in to FOREVER IS NOW, a previously published K. Vale book which I enjoyed. There is a desperate chase scene, and a part where the reader is left hanging, wondering if Gio is going to find happiness again. In all the pacing was excellent. The smexytimes were well-written and interesting. In all a satisfying quick read. 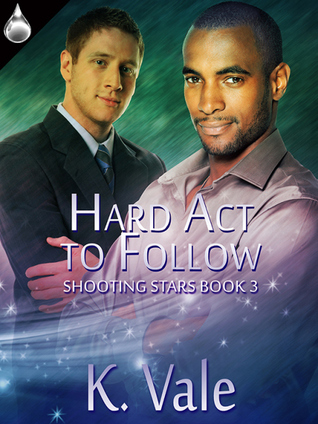 Kyrie is an out gay man. He’s just graduating from college as a theater major, and had previously been featured as the *possible* romantic interest of an aging rocker, Gio Savale, making a comeback and a reality TV show in book two of the series, Double Takes. His ex-brother-in-law, Greg was also a part of the book.

Greg is an attorney who has burned his candle at both ends to make junior partner. It probably cost him his marriage to Kyrie’s elder sister, Jasmine. They had an amicable divorce, however, and Greg is still close with their family–he’s an extremely close friend of Kyrie’s which makes things uber-awkward that he’s also frighteningly attracted to Kyrie. Romantically.

Lookit, this is a romance. And things get really romantic. The occasion of their reunion is tragic, but their chemistry–once they get the medical okay–is totally organic. And incendiary.

Kyrie and Greg are a good couple, if they can get past their selflessness. Greg was willing to stay away from Kyrie to not make life weird in Kyrie’s family, and Kyrie was willing to shun Greg so he could advance at his law firm–but it turns out neither of these sacrifices were necessary. Yay for us, because this is a super hot, sexy read!

I put the buy links up in the titles, just to keep it simple.

Kimber Vale is an avid reader, writer and gardener. She worked as an RN once upon a time, but is currently a stay-at-home mom to three busy hobbits. She is fortunate to have an understanding husband who never refuses to help with her “writing research.” He answers questions like, “What do you think eyeballs taste like?” and, “Does the term ‘cock-rockets’ sound more like a joke or an explosively good time?” with equal consideration and without batting an eye.